Seventy-Four Unreleased Dylan Songs for the Price of a Movie

Except for “Alligator Man,” there’s nothing revelatory on 1970, but it’s a worthwhile diversion. 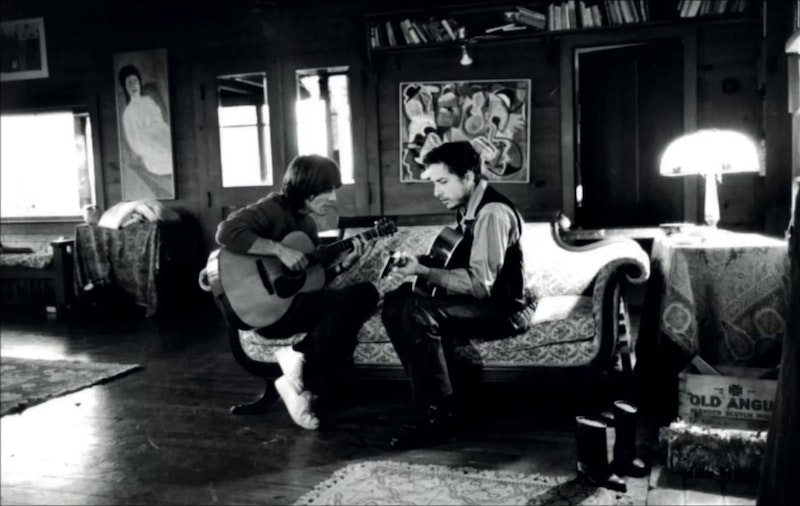 My view on Columbia’s scrounging-for-cash release of Bob Dylan’s 1970, a 74-song hodge-podge of Dylan fooling around in the studio during that year, is this: while there’s nothing revelatory, for the $18 (on Amazon; I’m not boycotting) it cost, around the price of a movie, it provided me a lot of entertainment last weekend. I’ve played the three discs 10 times or so, and have had my fill: I might flip it into my CD player later this year, or may not. I got my money’s worth.

I definitely don’t agree with Graham Reid, who dutifully reviewed the set, and concluded: “This release only serves to diminish the legacy of a man who last year stopped us in our tracks with the exceptional Rough and Rowdy Ways. Shame.”

One, Rough and Rowdy Ways sucked: I’d rather listen to the 225 outtakes of “Sign on the Window” (probably New Morning’s best song, unless you’re a Top Cat who favors “If Dogs Run Free,” and I respect that) than anything on the bloated and incoherent Rough and Rowdy. Two, it’s impossible to “diminish” Dylan’s legacy at this point, not after his official recorded output through 1975, the many “Bootleg” series Columbia’s issued over years, and his documentaries No Direction Home (2005) and Rolling Thunder Revue: A Bob Dylan Story (2019)—Martin Scorsese, naturally, waving his wand over both projects, but clearly Dylan, speaking in a normal voice, as opposed to his concerts, was the architect. Was Jimi Hendrix’s legacy “diminished” despite 100 or so shitty recordings released after his death? Thank you for your service, jury, and don’t forget to triple-mask, stay safe, move six feet back, write-in Jake Tapper for the Philadelphia City Council, and follow the science.

This Dylan “document” (a euphemism for Columbia’s avarice, which doesn’t bother me) is notable to me, at least, because it was recorded just before Self Portrait was released in June 1970—Self Portrait was a great lark, I thought at the time and still do, but it was instantly trashed by critics—meaning that the October unveiling of New Morning wasn’t, as was bandied about at the time, Dylan trying to “apologize” for the “self-indulgent” Self Portrait by following it up so quickly.

Over the years, Dylan has answered questions about his post-Nashville Skyline (and pre-Planet Waves) output in eight different ways—he’s said, for example, Self Portrait was shitty, same with New Morning, said both were a “lot of fun,” especially the former since he covered a lot of old favorites, that it was the desire to shake fans and critics of the by-then-outdated “spokesman for a new generation” label—and there are probably snippets of truth in each explanation. At this point, as Dylan nears his 80th birthday, it’s puzzling that anyone takes anything he says to the media seriously. Unlike Bruce Springsteen, Dylan continues to fuck around with reporters, a not dislikable tic.

My favorite track(s)—three versions—on 1970 is Dylan’s cover of Jimmy C. Newman’s 1961 “Alligator Man.” Perhaps a lapse in my head’s discography, but upon first hearing it, I thought—like “Wanted Man,” from Dylan’s Bootleg Series #13, with Johnny Cash (2019)—it was a quickly-written Dylan original. The lyrics fit: “Mosquitoes buzzin’ round my head Spanish moss for my bed/There is seldom seen dried land cause I’m an alligator man/I hunt the gator all night long sell his hide then I’m gone/I see the belles from the bayou shanty love this Alligator man.” My disappointment, while not acute, upon reading the liner notes and seeing it was a cover, I suppose was an indication that I still want to hear long-gone Dylan originals. (And, while we’re at it, I’ll repeat my belief that at some point Dylan’s near-perfect “Love Is Just a Four Letter Word,” allegedly never recorded by the songwriter himself, but given to Joan Baez, will show up on Bootleg Series #29. That would be momentous for the increasingly small world of Dylan scholars and plain old fans like me.)

The dross on 1970 does outweigh the fun tracks. Dylan singing Paul McCartney’s harbinger of his post-Beatles future, the gooey “Yesterday,” is, I guess—especially since George Harrison plays on it—a private joke that I wish were kept private. His versions of “Cupid,” the Everly Brothers’ “All I Have to Do is Dream” (Self Portrait’s cover of “Take a Message to Mary was excellent), “Thirsty Boots” and a partial rendition of “Universal Soldier” aren’t even mediocre. And I’ve always hated the song “Long Black Veil.” On the other hand, Dylan singing the Boyce/Hart 1964 smash “Come a Little Bit Closer” as performed by Jay & the Americans, is both catchy and really funny. And his sort of country “I Don’t Believe You” is pretty good, too, although nothing close to the volcanic, seething rendition on his live European tour in 1966. Same for “One Too Many Mornings.”

A bit more history. In the November 20th, 1970 issue of Rolling Stone, Ralph J. Gleason—who mentored and put up with Jann Wenner until his death in 1975, when the two weren’t speaking—was rhapsodic about New Morning, with a review headlined, “We’ve Got Dylan Back Again!” As Joe DiMaggio said, in reference to Paul Simon’s “Mrs. Robinson,” Dylan undoubtedly read that and thought, love Ralph, man, but I didn’t go anywhere!

Gleason: “There is nothing to fear but fear itself, our last real president said [Truman and Ike, in 1970, hadn’t yet been rehabilitated by historians, and I’m not sure what Ralph’s beef with JFK was]. I’m old enough to remember [anticipating Twitter!] him saying it. Franklin Roosevelt’s words coming out over the Atwater Kent that Lenny called the first cathedral we knew. FDR would have dug Dylan, had him in the study for talk and songs and Eleanor would have stood with him as he stood with Josh White. Back then, there was honor on Pennsylvania Avenue.”

Japanese-American internment camps and Dresden aside, I recall reading this at 15 and thinking, jeez, Gleason is on the sappy side, blindsided by this so-so record, but there’s nothing wrong with an optimist.