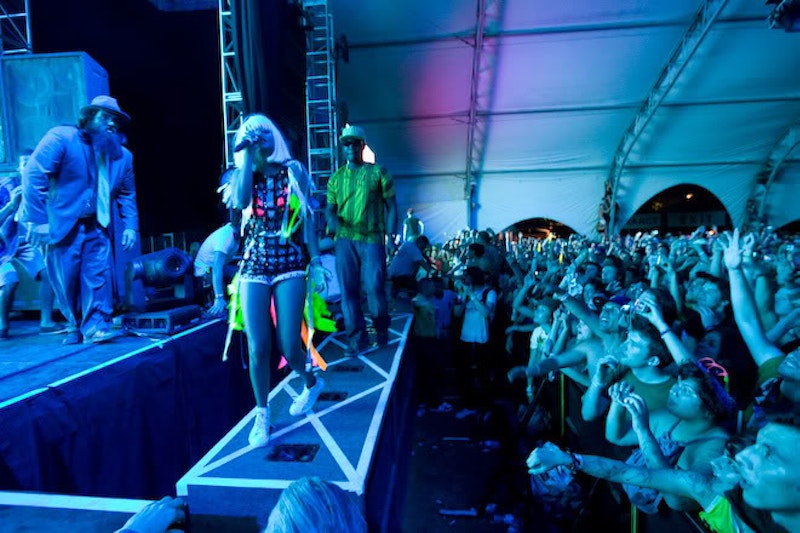 Might as well get this out of the way right now: I’m officially off the M.I.A. bandwagon. If Arular was a stirring portrait of the artiste as a young woman holding a cracked mirror up to the third-world (“world town”) inhumanity that roiled her and Kala was a less abrasive, more ingratiating crossover gloss on same, then the pre-release leaks from /\/\/\Y/\ that I force-familiarized myself with were Maya Arulpragasam giddily feeding whatever ambassador/activist/provocatuer-in-retina-searing-Hampsterdance-fabrics good will she’d earned into a screeching shredder. Don’t have much use for Rye Rye, M.I.A.’s B’more based N.E.E.T. Recordings signee, either. Rye and local producer Blaqstarr’s Shake It To The Ground EP/mixtape left me cold, and “Bang”—a frantically anonymous, Blaqstarr-produced M.I.A./Rye Rye single from last year—was a non-event which I described, in a different publication, as “cheap chrome flash.”

So I was ready to detest “Sunshine” right from jump, before the first note, and was shocked when I realized that I dug it. Sixteen seconds shorter than “Bang,” “Sunshine” benefits from a relatively warm, convivial ambience, M.I.A.’s hypnotically percussive dum-dum-dum refrain and disembodied island-patios-esque nyah-nyah hook (cf. “Cake“-era B-52s), Rye’s naturalistic schoolyard sass, a dump truck full of handclaps, and a worker-bee bass line so shapely, sublime, and supple that I want to take it to the courthouse and marry it.

There’s a lot more to love. A peculiar synthesizer effect that splits the difference between steel-drum splash and xylophonic tunelessness acts as a lead-in, and M.I.A.—who actually produced this banger, and on the evidence, should ponder making it her vocation—opens with some old-as-time girl-boy-girl brouhaha as palms slap like bombs and that infernal bass begins to worm its way into your soul: “We were in line, when we got the first sign / The boy she liked, checking out what’s mine.”

Rye is all flying elbows, spitting bars that aren’t quite double-time but feel double-time, as if she expects power to the microphone to fail at every second and is rushing to finish a thought. There’s a hurtling, double-dutch energy to her flow, desperate but under control, the what of the verses somehow not as crucial as the underlying how. This isn’t to say that there’s nothing thrilling in a line like “Hot girls keep lookin’, postin’ up, throwin’ up, so mad cuz I’m bookin’ / I can get your man, too, all I do is crack a smile when they fall through”; there is. But Rye’s bark means more than her bite, here, and she doesn’t so much mean what she’s saying as she wants to show off, in the same way that jump-roping girls at recess don’t mean what they say when they’re swinging or pogoing: virtuosity’s the point, or maybe community is, because “Sunshine” ultimately just feels like a big, urban hang, you know? Smells appealing yet unfamiliar, beats you can’t quite parse but want to hear more of, carefree, fearless laughter that you’ll never know intimately but would love to bathe in, if only for a few fleeting, concrete-canyon moments more.