I'll Tell You What isn't his best, but is still great. 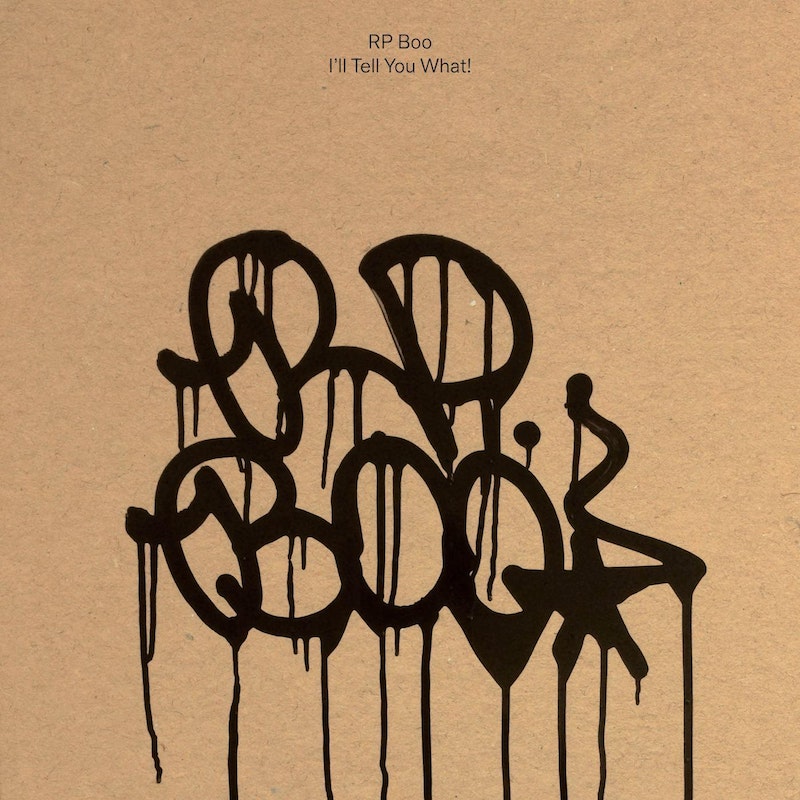 Chicago footwork DJ RP Boo is one of the most innovative, and original musicians alive. He makes repetitive, staggering robotic funk masterpieces that sound like Philip Glass stitched together with James Brown; joyfully fractured tracks which hop here and there and back to here and back to there, in ever escalating oscillations.

Boo's latest album, though, unexpectedly de-escalates. On I'll Tell You What, the repetition and the relentless beats are still there. They've just slowed down a little, so Boo has time to strut as well as race. "No Body," the first track, includes a rumbling low end that sounds like a distorted heartbeat, and a bass effect like a psychedelic frog groan. "No body helping with me in these streets" the track chants over and over. It's footwork for zoned-out head nodding.

"At War" is also unusually woozy by Boo's standards; it starts out with an a cappella loop declaring, "We are at war in the streets," like some lost battle dancer wandering around in circles on an empty pavement. The beats eventually come in, but it's still sparse, the vocals tweaked so they turn into a psychedelic strobe. "Bounty" features descending tones and what sounds like sci-fi movie music screwed and chopped, everything slowed down rather than sped up. "One way or another, I'm gonna find you," someone mutters, a half-lidded karaoke Blondie lift that wanders off into ambience. "Cloudy Back Yard" is a broken spy soundtrack, the hip ominous throb turning back on itself, the wah-wahs doppling off into the distance.

Nothing on the album hits with the anthemic force of "Bangin' on King Drive," the highlight of 2016's Fingers, Bank Pads & Shoe Prints, which started out as a race down Chicago's streets, and just kept accelerating, jerking you back and forth on a yo-yo rollercoaster through Boo's neighborhood. Nor is there anything with the manic Loony Tunes insanity of  "Robotubutizm" from 2013's Legacy, which sounds like Santa's workshop invaded by terminators and phalanxes of drums.

For an artist whose work makes such brilliant use of repetition, heading for new ground can be unusually uncertain. How can you keep saying the same thing while saying something a little different? I can't quite pledge my love as wholeheartedly to I'll Tell You What as I have to Boo's earlier efforts. But there's still pleasure in watching him try for some new effects and work out new ideas.

And the more laid back approach has its own triumphs. The last track on the album, "Deep Sole," is, like the title says, a soul tribute, or possibly a soul parody which deploys bits and pieces of smooth melody and female gospel tinged vocals, and then swathes them in layers of electronic washes, bleeps, and beats. It's a Phil Spector-like wall of sound, if Spector was re-jiggered out of bytes.

My favorite moment on the album is "U-Don't Know." The song is built around a lazy keyboard melody, with Stevie Wonder's sampled vocal from "Lately" ("you don't know") lifting again and again out of the clatter of beats. It sounds like the singer is reaching out for some transcendent something, which is always just out of reach as the phrase is cut off—in fact, Boo's manipulation makes it sound like Wonder is saying, "you always start to rise" rather than "you always start to cry." Meanwhile another sample muses, "do I give away my soul?" Boo is lifting up towards new stylistic territory, while trying not to lose himself. If he hasn't sustained quite the same level of genius, it's still the case that he sounds like no one else.