A creationist’s guide to A List of the Burning Mountains. 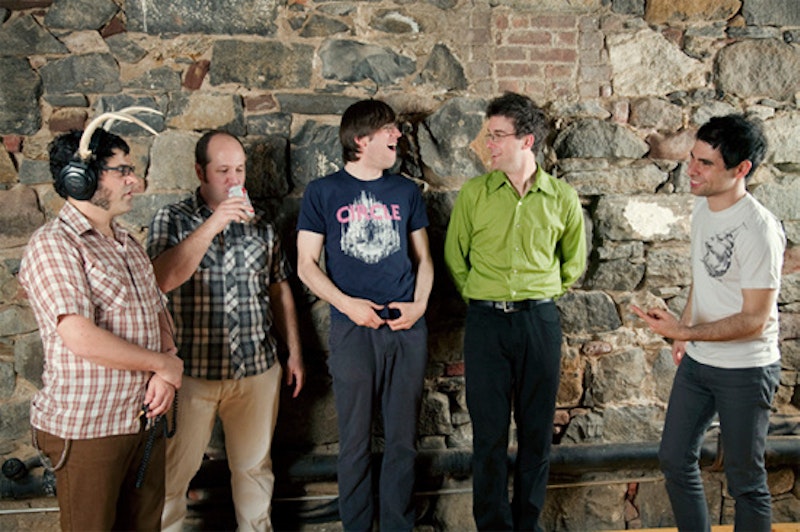 Discussions of space rock—an alternately abstract, driving, or phase-heavy species of guitar and/or synthesizer-based music that counts the likes of Yume Bitsu, Landing, and Spiritualized—are notably specious in terms of the genre’s specific temporality. Fair enough: space rock is mostly intended to blast listeners-qua-cosmonauts somewhere beyond the laws of gravity and physics and rhythm logic. Modernity or the lack thereof is beside the point, and the point isn’t very complicated. Either you write 15-minute songs that rock like Our Universe minus the geek explication, or you cannot. Give us The Hitchhiker’s Guide to the Galaxy or a Big Bang or lock the basement door on your way out and pay the pizza guy for us.

Brooklyn’s Oneida have cut a lot of records, many of which are ideal for chin stroking and being introduced to a lot of academic and unorthodox musical ideas that are undervalued in the larger culture. A List of the Burning Mountains (Jagjaguwar) is the quintet’s space rock opus, but it’s hardly the traditional space rock opus. You’re not meant to hit a bong and go hurtling around Jupiter’s third moon at three times the speed of sound while this thing emanates from your high-fi. No, Mountains is a Biblical space rock album, a space rock album not about bitchin’ comets and tubular black holes and skimming asteroid belts while surfing atop the USS Enterprise, but about the very act of fabricating the universe from whole cloth.

The grunt work, you know? The cosmic nuts and bolts, as it were, the precursor to the Big Bang. Figuring out how to build planets and then ensure their continuing rotations around the Sun. What were the exact atmospheric ingredients and conditions conducive to fostering intelligent life? How far apart should one planet be from another so as to challenge intelligent life, to not make interstellar travel too easily achieved? What should the lifetime of a star be? We like to think of God as an all-knowing God, but let’s be real: there was probably a bit of trial and error en route to reality as we’ve come to know it—no YouTube instructional video!—and Mountains echoes with the uncertainty and inelegance of awesome forces colliding and colluding, of dry runs and spectacular fuck-ups and breaks to gawp at the massive scale of the undertaking at hand and constellations already hung and illuminated.

Perspectives shift: sometimes, on Mountains, you are watching The Almighty solder together two halves of a heavenly body, but then sometimes you are situated at the core of that very body, and God is tunneling in, but you don’t really feel one way or the other about that. Themes are adhered to very, very loosely, and there’s the sense of winding as semi-aimlessly through the record is the band is—but nonetheless everyone is on a journey where you’re forced to earn your way. The thinking, bear with me here, is that there’s nothing smooth or effortless or utopian about space, ala 2001 or Star Trek: space is dirty, dangerous, unknowable, and prohibitively expensive, and it was no less disagreeable when it was being willed into existence. Oneida have accomplished something remarkable: they’ve forced space rock to be honest.

—Raymond Cummings is the author of Class Notes, Crucial Sprawl, and a number of other books.