Rippers of the 20th Century

Could an anthem of death and torture be just as moving as a sweet love song? 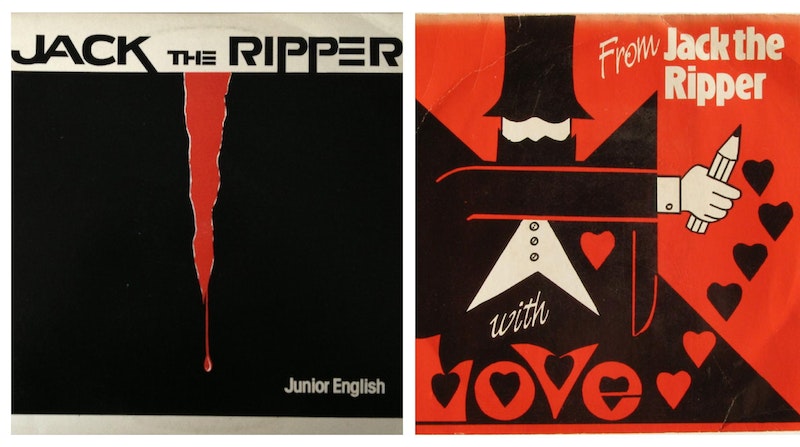 Could an anthem of death and torture be just as moving as a sweet love song? Fans and artists alike hold a strong attraction to the odd harmony of music’s cathartic power and murder’s horror. Proof of this exists in the large 20th century pop canon inspired by Jack The Ripper:

During the 1950s and 60s it was common to find Jamaican artists re-arranging and covering pop hits from the US and the UK. There’s no ska version of Screaming Lord Sutch’s “Jack The Ripper,” but two different ska acts in 1964 wrote and released songs named after England’s favorite psycho. Prince Buster was one of the most popular Jamaican artists of all time. Buster’s "Jack..." is classic first wave ska—a joyous instrumental with expressive jazz solos credited to the group Prince Buster’s All Stars (which was actually The Skatalites augmented by several other musicians). Obscure ensemble Carlos Malcolm & His Afro-Jamaican Rhythm also cut an original instrumental called "Jack The Ripper." With spooky minor key arrangements to the fore, Malcom’s track comes off like a weird ska eulogy for the Ripper’s victims.

Reggae vocalist Junior English got his start as a Prince Buster protege in the early-1960s. By the late-70s he’d relocated to the UK where he found bigger success cutting four hit albums in 1978, including an LP titled Jack The Ripper. The record's title track is a moody stunner peppered with stark melodies, hypnotic poly-rhythms, and dub-style production flourishes. Like its many counterparts, the song’s lyrics form a sobering account of the Ripper’s exploits and their mysterious nature. Despite its nervous tension, this is one of the most danceable murder anthems of all.

The 80’s best Ripper rocker was this thuggish single. Cleveland’s punk scene is one of the few that’s lasted for 50 years and this recording is a testament to the passionate fury and originality that’s made Lake Erie’s southern banks an evergreen nexus for creative insanity. Shock value and nihilism are the prime lyrical motivators, though the lightning licks of lead guitarist Bruno Helton and the single’s gory/blurry cover photo (which looks like a still from a slasher flick) add an undeniable fantasy element to this riff-fest. Strychnine were a hard rock crew who jumped on the punk bandwagon later than many of their Clevo contemporaries. Their “Jack…” is an original composition written by rhythm guitarist “Crazy” Joe Uherc. Grungy riffs, snotty 70s swagger, and complex arrangements converge here in one of the Ripper canon’s most surprisingly eccentric works.

This single was produced as part of a stage production and was sold to benefit a cancer charity called P.E.A.C.E. Exactly why such a wholesome effort incorporated Jack The Knife’s gristly legacy is a mystery. The front and back covers of the 7” contain some background info on the performers and the production, as do the record’s labels. These elements can be found easily, but the record’s music is elusive; that’s my fancy way of saying I have no idea what it sounds like. To lovers of rare UK/DIY music theater: can you help fill in the blanks here?

Best known for the bizarre cut “Snails Love Theme” by The Snails, Perfection Sound Studios was one of the Deep South’s greatest indie labels. Their 1960s releases featured a unifying sound that mixed primal teen rock with jittery slapback echo, crunchy treble, and muddy distortion. Among the label’s best records was the lone 7” by Smyrna, GA garage punks Jack & The Ripper Z (not a typo; it appears clearly printed this way on the single’s blood red label). Jerry Thighpen wrote “Heart Attack,” but Will Arnold was the mad guitar mangler who led the group through this harsh instrumental. The Perfection band were probably the only one ever to use the “Ripper Z” spelling, but “Jack & The Rippers” was a moniker used by numerous late-20th century acts including 1960s garage combos from the US and Sweden, 70s punk bands from Europe and Australia, and several 80s new wave groups.

Spike Jones was a popular novelty music performer in the mid-20th century, a ubiquitous pop weirdo. Today Jones is semi-forgotten. Fans of outsider music, noise art, and Cramps-ian psychobilly will find plenty to love in Jones’ vast discography. The artist had a few pseudonyms and released this track under his darkest nom de plume. Despite having no direct lyrical connection to the Whitechapel murders, “I Was A Teenage Brain Surgeon” exists in perfect harmony with Jack’s insane legacy.