Into the Brill Building with Ariel Pink. 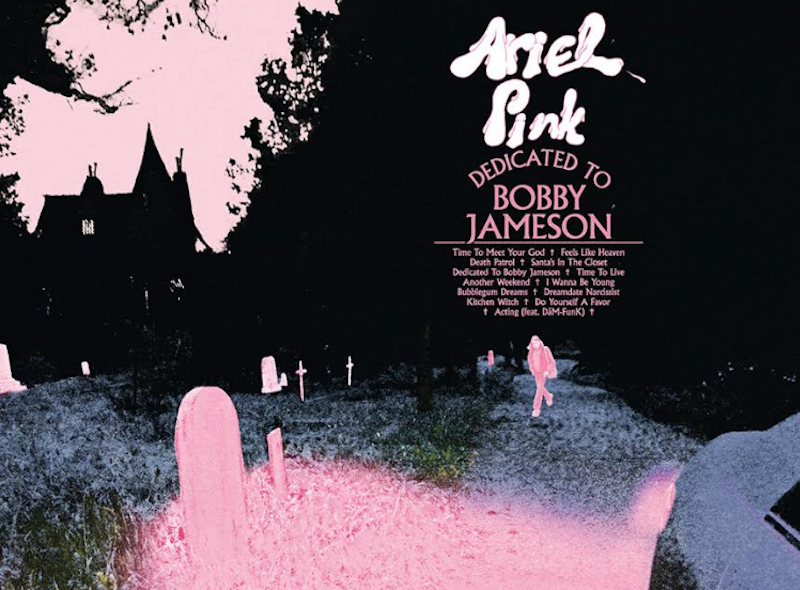 “Time to face the firing squad.” Ariel Pink’s new album, Dedicated to Bobby Jameson, is a groggy comedown from the technicolor hysteria of 2014’s pom pom. It kicks off quick with “Time to Meet Your God,” a lyric that Pink intones over and over again in staccato. “Time to face the firing squad.” Three years ago, he called Grimes “stupid and retarded,” he was “maced by a feminist,” and claimed that Madonna’s people asked him to write for her (“They actually need songs. I’m partly responsible for that return-to-values thing”), and then torched that bridge: “Ray of Light is not cool.” He compared himself to Jimmy Savile and told Pitchfork: “I could be an asshole, and that's my right. People need to get over that. It's not illegal to be an asshole. It's not illegal to be racist, even. It's not illegal to do anything.”

When Pink released the single “Another Weekend” earlier this year—on a different label, moving from 4AD to Mexican Summer—I guessed that his new record would be a conscious attempt at negating the lyrical and melodic insanity of pom pom and Mature Themes for something more palatable and less provocative. “Another Weekend” is full of references to hangovers and drug binge regrets (“Another weekend I can’t rewind/another day that’s not working for me”). No more cocaine men and portobello girls—Pink cut his hair short and tried to adopt a more equanimous persona in interviews. Briefly, it worked: he admitted calling the album Dedicated to Bobby Jameson so that he “wouldn’t have to talk about [himself].” But get the guy going and he can’t resist calling Donald Trump “a success story.”

It’s a far cry from the fall of 2014 when he was busy being an edge-lord and permanently alienating a lot of people who found his comments directed at Grimes and Madonna beyond the pale. Maybe 4AD thought the controversy hurt his sales and distracted from the music, but those incoherent speed-freak rants were completely of a piece with a double album containing refrains like “Penetration time tonight!” and “C’mon don your doggy collar/Bet your bottom dollar/C’mon take your bra and panties off/You juicy Belladonna."

Dedicated to Bobby Jameson is Ariel Pink’s Brill Building record, an album full of straightforward pop songs with no narrative—the title is a red herring (“There’s no reason why I should’ve named it that way… There’s no theme on the record”). This record is further proof of Pink’s considerable talent as a songwriter, and he seems to revel in the assembly-line quality of songs like “Feels Like Heaven,” “Bubblegum Dreams,” and “Dreamdate Narcissist.” Even the vocals on “Santa’s in the Closet” are manipulated and obscured to the point that lyrics about Mr. Claus putting on a leotard go by unnoticed. “Death Patrol” is an instant classic, sonically of a piece with his last two albums, revolving around infectious clavinet chords and a stunningly sad chorus. In an effort to burrow himself in his music and erase his personality, Pink turned in a song cycle without any obvious standouts. In place of provocation, there’s a remarkable melancholy and sadness that hangs like a veil over this whole record.

In that way, it’s more similar to his lo-fi work than any of his 4AD albums, because once again, we’re invited to imagine along with him. The faceless persona of the lyrics and the conventional melodies leave so much more room to project upon. The production is so gauzy and atmospheric that it takes a dozen or so listens until details like the guitar fills that litter “Death Patrol” or the marimba on “Kitchen Witch” reveal themselves.

It’s noted in almost every review of this record that “Time to Live” lifts its verse melody from “Video Killed the Radio Star”—another obvious musical quote is the basis of “Bubblegum Dreams,” which might as well be a cover of “Son of a Gun” by The Vaselines. Pink also reaches deep into his catalogue for scraps, re-working old songs like “I Wanna Be Young” and re-using an old lyric in the chorus of the title track (“He was a Tinseltown Tran-NAY!”) He elides his personality even further by allowing famous pop melodies to slip in unadulterated, when in the past these references and influences were always just out of reach.

Dedicated to Bobby Jameson is Pink showing off, proving he can write catchy pop songs about nothing. It’s almost a dare, a different kind of provocation than the titillation of pom pom. No more songs about cum or sexual athletics. “Do Yourself a Favor” actually sounds like something he recorded in bed, still half-asleep. The album ends with “Acting,” a collaboration with Dâm-Funk. The last voice we hear is someone shouting “Happy ending!” But repeated listens reveal how much melancholy defines this record, and its lack of conceit makes that sadness even more vague and genuinely eerie. Dedicated to Bobby Jameson is an album to get lost in.