One World Under Ground 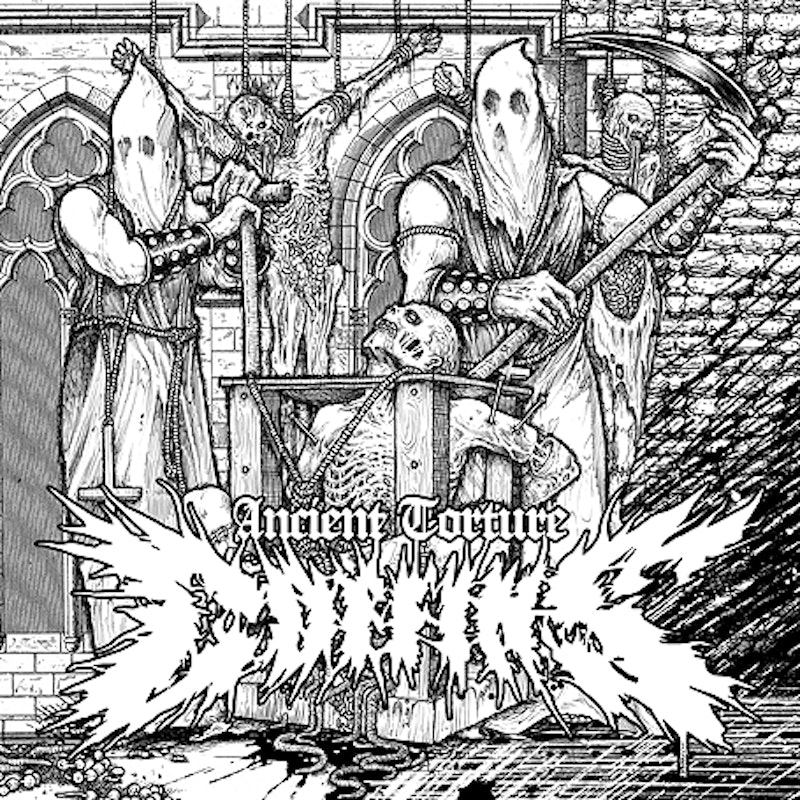 Death knows no boundaries, and neither does death metal. Like its moldering extreme metal cousins doom and black, death metal is tied to no separate zip code or scene, instead festering indiscriminately across the face of the globe. From Florida to California to Scandinavia to Brazil to Holland to England and on and on—with death metal it's not where you live, but how you rot.

There's certainly no way to tell that the Coffins are from Japan. Ancient Torture—their recently released two-CD compilation of work from splits, comps, and EPs released between 2005-2009—includes no clues as to ethnicity or venue. The cover art is not particularly Eastern; on the contrary the scythe-wielding inquisitors on the front cover sport crosses and appear to be hideously disemboweling their cadaverous victim in some sort of medieval European setting. The inside illustrations are all similarly unspecific gothic. And, as with death metal worldwide, the song titles—"Wasteland of Terror," "Evil Infection," and "Torture"—are in English, the universal language of degradation.

The music is distinctive, but not in any way that makes you think of traditional Japanese music or J-pop. Instead, the Coffins purvey a universal mixture of death and doom, all grunting, pig-like Cookie-Monster vocals and detuned trudging. The band drags itself through layers and layers of feedback, pausing every so often (as on "Mortification to Ruin") for a classic rock guitar solo to pull itself from the swamp before being sucked under again. The awesomely named "Acid Orgy" has a Ramones-esque three-chord hook slooooooowed down as if Joey and the gang were attempting to perform despite severe and repeated blunt trauma. You can almost hear the Japanese accent as the singer repeats "Acid Orgy" over and over again, but really it sounds more like his voice is strange because he's vomiting barrels of fish guts. "Offalgrinder" gets up to a fast shuffle, as if the band is trying to decide whether to be hardcore or doom and the whiplash buries the singer's voice completely; he sounds like he's been interred in a well and then had 1000 barrels of muck dropped on him. "Ebony Tears" dispenses with all that punk crap and just goes for eight repetitious minutes of doom, doom, doom, doom, the heavy Sabbath-worthy riff repeated over and over, the singer retching and growling inarticulately, a canticle for stoned pachyderms.

The anonymity of death metal is probably a large part of why it's so widely disliked by non-aficionados. The sexless, inhuman vocals that turn every singer into the same death's head; the technical prowess and heavy rumbling that turn even relatively disparate influences (hardcore, Black Sabbath) into sludgy, undifferentiated pummeling; the abject horror movie lyrics. If you listen to indie rock or R&B or rap or jazz or cock rock you're there for the swagger and personality, which is why national scenes, or national identity are an important touchstone. Bjork isn't Bjork without her outré Icelandic charm; the Boredoms aren't the Boredoms without that manic avant Japanese-ness; Dre isn't Dre if he's not representing the West Coast. But the Coffins? They look like a corpse wherever they happen to have grown up.

Diversity and personality are certainly enjoyable in their own right; the vertiginous variety of the capitalist buffet, where everything is new and shiny and different and your local ethnic spice can tingle the pallet of consumers far and wide. But there's a perverse one-world underground appeal to death metal as well. In the U.S. or Brazil, Thailand or Japan, force and hate and death stare through the same sockets at the same bleak, blasted landscape. If most music tells us that the world is our playground, death metal reminds us that, wherever we live, it's also our coffin.