An Island of Lost Souls 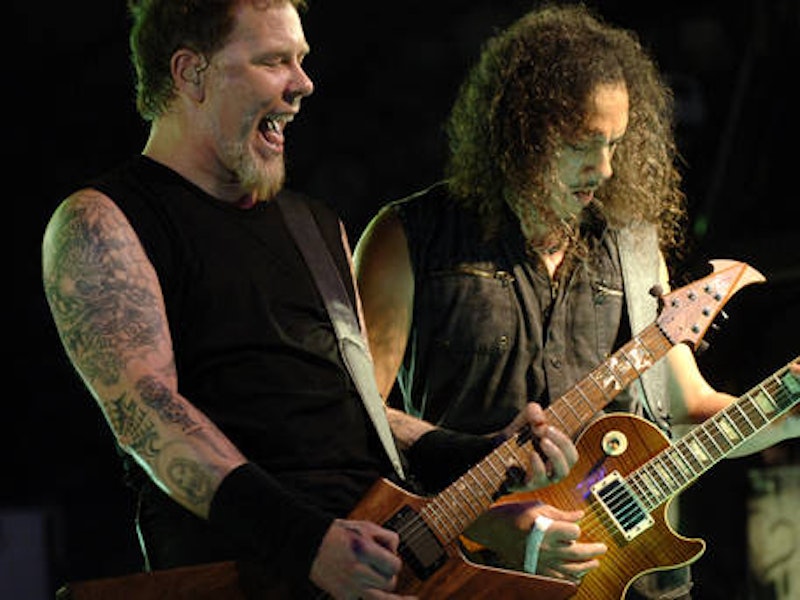 Sean Fanning and Lars Ulrich, we are able to infer somehow, are the co-founders of a black metal/hardcore/queercore band from Toronto (circa 1989) who are struggling to remain true to their identity and scene in the face of mounting commercial success. Except that this is bullshit, fiction, a tall tail, and the video is actually about the making and marketing of a film about a black metal/hardcore/queercore band from Toronto that’s something of a vanity project for everyone involved and is destined to fail horribly. There’s a girl, a record deal, scenes of where fifth graders get intricate “LOUTALLICA” tats, Laurie Anderson breakdancing, some nonsense about metal/hardcore/queercore toughs from different towns meeting at the train tracks to settle things like men, which is hilarious because Fanning and Ulrich are clearly older than the other toughs, who are teenagers. Lou Reed wanders in and out of scenes, high on H, and it’s unclear why he’s there; he’s like an Alzheimer’s patient. James Hetfield appears as WWE star Triple-H, which in this video’s pretzel logic means he gets to body slam Reed without disturbing what passes for continuity. Robert Trujillo and Kirk Hammett pay fascist Marx-reading Toronto policemen.

Lou Reed and Metallica are performing “Junior Dad” onstage, in the eye of a no-nonsense monsoon, and are suffering and enduring wave after wave of serious electrical shocks; as the song progresses, the musicians’ eyes pulse with white light and they are able to achieve flight. The director intercuts this CGI-enhanced fantasia with footage of the band watching said fantasia while cracking jokes and pouring one another generous goblets of wine from amethyst carafes. Everyone in this video is wearing an ascot and ass-less chaps.

The video begins in a mausoleum. It’s an almost stereotypical mausoleum: shadows and white stone and icky green moss swirling in quiescent sculptural menace. An obelisk is situated at the center of the mausoleum for no apparent reason. The director cuts to the inside of a sarcophagus; we’re certain that we’re examining the inside of a sarcophagus because we get a glimpse of a mummy, of frayed bandages. A quartet of maintenance men in matching forest green jumpsuits sullenly push mop buckets into the mausoleum. The perspective shifts back and forth between the mausoleum and the sarcophagus, with the maintenance men and the mummy becoming incrementally more animated, until it becomes apparent that the maintenance men are Metallica and the mummy clawing decayed flesh from itself and struggling desperately to breathe is actually Lou Reed, and then a demented and out-of-control Reed smashes his way out of the sarcophagus, which is actually the obelisk, in the mausoleum, where the forest green jump suited maintenance men with the strong resemblance to Metallica have set up with blood-drenched instruments and are kind of laconically rocking out, the melody being a pretty laconic one, for “Junior Dad.” For a while, Reed-as-mummy thrashes—a sort of one-man mosh pit situation—before accidentally crashing through the mausoleum wall and onto the set of Love Connection, where a taping is in progress, violating several temporal precepts. Chuck Woolery and the live studio audience stare at Reed-as-mummy and the maintenance men-as-Metallica, who stare back. It’s very quiet, and the staring goes on for an uncomfortably long time.