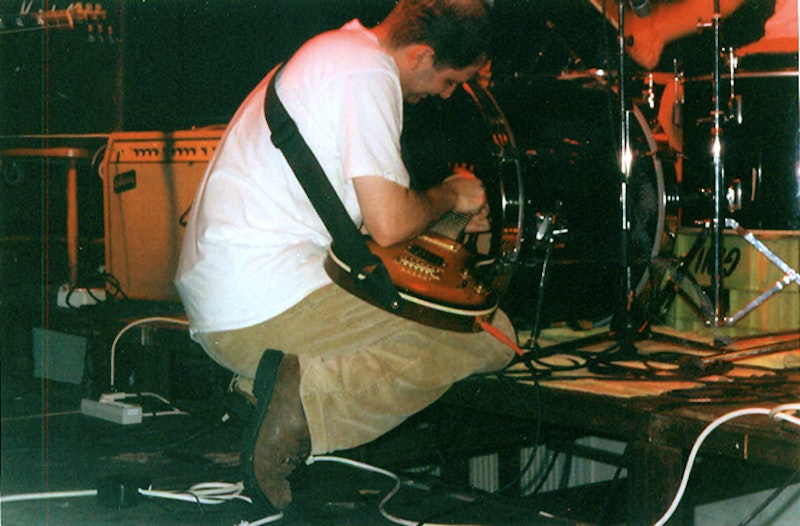 Jason DiEmilio’s still maddeningly unknown today, six and a half years after his premature death at the age of 36. The native Philadelphian made music as the Azusa Plane, recording everything himself and utilizing a drummer and second guitar player live. DiEmilio was an avant guitar god, stretching and abusing his instrument of choice to find new ways to wring emotion out of a cultural artifact that always seems on the verge of being completely exhausted. But the electric guitar hasn’t even been around for a hundred years yet; to dismiss it is ridiculous. What’s stale is guitar players approaching the instrument with wasted contexts in mind: blues rock, three-chord punk, hat-and-vest folk. It’s a piece of wood and six vibrating metal strings, begging to be manipulated in stranger ways.

The Azusa Plane’s music is expansive and dark, like an enormous thunderstorm hovering over an endless gray ocean. DiEmilio’s guitar and synthesizer drones move at a glacial pace, but played at any volume, they sound huge, like the sound of eternity, birth and death. Tycho Magnetic Anomaly is his masterwork: four drone suites that are enormously world weary and hyper-tense. Even as they move along at a snail’s pace, shifting chord so gradually it’s undetectable, DiEmilio’s Fender amps scream and wail, sending out gorgeous overtones and a nasty, cutting midrange distortion that sounds like a swarm of bees devouring a hunk of steel wool. It feels all encompassing, the sum total of all your experiences flashing within your head as you sublimate into nothingness. Rocket Girl’s retrospective singles compilation Where the Sands Turned to Gold from last year is also excellent and collects a number of more reined-in and down to earth songs: the melodies melancholy and resigned, the distortion raging but in its place in the mix. In all his music, there’s a deep sense of loneliness and despair, aside from the tragic circumstances of his death.

DiEmilio killed himself in 2006 because he developed a torturous and debilitating case of tinnitus (ringing in the ears) and hyperacusis (extreme sensitivity to all sound). Listening to music at any volume was unbearable. Every day life was impossible—forget being in a rock band. “The irony and cruel joke of it all is completely unbelievable” he wrote in his suicide note, lamenting too all the doctors who knew nothing of his condition or how to fix it. His story and heavy, almost religious music are deeply moving and scary to me. I’ve dealt with chronic stomach issues, and have had glimpses of the pain of being a medical mystery and brushed off. To imagine myself in Emilio’s situation—not wanting to die but unable to bear a broken body—is such a dark specter. More reissues, retrospectives, movies, articles, interviews about Jason DiEmilio are badly needed, for posterity, for a man who suffered biblically and whose guitar could be the mouth of god.