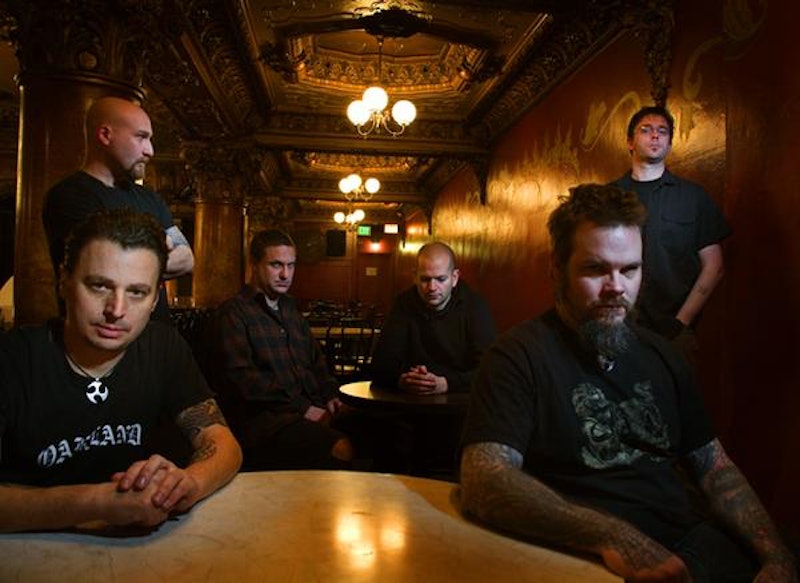 Before metal got all mannered and started circling the drain of drone, getting all respectable, and soundtracking Jim Jarmusch movies, Oakland hardcore/metal contingent Neurosis stood alone in stretching out, slowing up, and lurching forward the core dynamics of heavy rock. And sorry bro, but none of the copycats and third-generation in-quotes catharsis builders that have come since really compare. The release of a live album, Live at Roadburn 2007, and the re-release 1993's Enemy of the Sun make that painfully clear.

For longtime fans, Live At Roadburn 2007 is a satisfactory document of this constantly-evolving, shape-shifting group's live-show. For new fans though, especially the ones a bit outside metal's reach (those who find say, the “heavy” sounds of Pelican or Sleigh Bells invigorating) this live release is ideal. Live At Roadburn 2007 contains everything interesting and challenging about Neurosis, stretched to weirder, more fascinating extremes: dead-serious Cormac McCarthy-derivative spoken-word processed through falling-apart electronics (“At The End Of The Road”), flanged-out stoner metal (“Left To Wander”), devastatingly beautiful melodic rock (the final few minutes of “Crawl Back In”). The shortest song hits the six and a half minute mark. So austere and unimpeachable are these guys that the audience, presumably bowled over by an hour-plus of glass-gargling vocals and mountainous riffs, politely clap when they come to the stage and otherwise remain silent.

Though Neurosis come off a bit more arty and ponderous in concert than on record, that's the headspace they've been in for awhile now (at its worst on 2004's tepid Eye of Every Storm, and its best on Given To The Rising, the 2007 album that makes up much of Roadburn's setlist) and well, it works really well for them. The result is this strange metal, not metal, but totally-fucking-metal performance that mixes apocalyptic horror and damaged beauty however it sees fit. None of the first one and then the other style of many of their followers, but a cohesive, sophisticated, and, most importantly, awesome mixing and merging of metal styles.

For a slightly more concentrated dose of Neurosis' specific brand of heaviness, pick up 1993's Enemy Of The Sun, which has been long out-of-print in both of its original Alternative Tentacles pressing and it's release from Neurosis' own Neurot Recordings. Now, it's back on Neurot and it's the band at their most furious (“Raze The Stray,” “Cold Ascending”) and most actively avant-garde (there's a 26 minute drums-only track called “Cleanse”). So yes, long ago Neurosis internalized the grammar of metal and hardcore and realized the ways that minimalism's reflected in abandon-less riffage and drum solos can be Terry Riley-like and loud-quiet-loud is pretty much the same as Sturm und Drang but the group's never lost sight of the immediacy and big, dumb simplicity of gnarly guitar work and cathartic screaming.