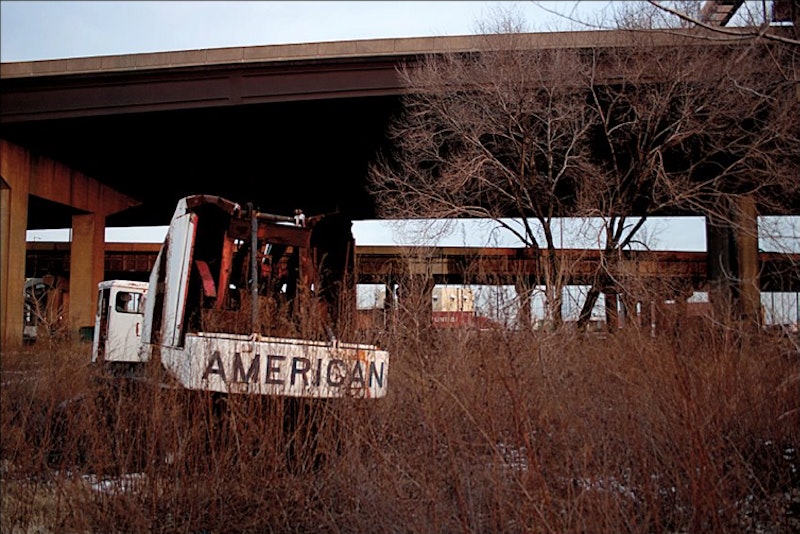 Friend Collector are demolition experts. Emerging out of the ashes of the late iron hammer Baltimore noise rock band The New Flesh, Friend Collector’s debut American LP is a beautiful, shambling assault on twee, limp rock, liars, prevaricators, sloths, and friend collectors. Loud guitars, loud bass, loud drums. Bursts of dense but focused noise, surging forth like a carpet bomber. Scott Russell’s drums sound like they were recorded in an air hangar. It’s the sound of a controlled explosion. The two sides of American are unrelenting and delirious like a bad panic attack, or severe shock, the mental stream of someone having a nervous breakdown and spontaneous Tourette’s. But the songs are very locked in and mechanically steady—it’s the sound of a band in control of their powers, not just spewing noise aimlessly.

Gregory Dembeck’s guitar and Jason Donnells’ bass lines fuse into this viscous, oozy green-gray soup that slides in and out of focus, writhing around in space between moments of total bliss, octaves aligning briefly before dissonance sets in. There’s a melodic underpinning to this record unlike anything The New Flesh ever did, even if it’s obscured under layers of noise. It’s a sad feeling, almost longing, but the record is too brutal to let any of those impressions sit long. Every culture and scene needs its benevolent terrorists. They’re angry, but not violent. They’re striving for something, attacking the happy slaves and clueless pleasure seekers. Friend Collector’s yawp of focused anguish is about as honest as you can get.

The copy inside the record reads: “Many people outside our culture make insulting, misinformed commentary on our culture and many people inside our culture are too inept or self-centered to make commentary on our culture.” Anybody without his/her head in their ass can see what a pit we’ve found ourselves in: baby boomers have pilfered and legislated their way into a comfortable, leisurely last act of life, leaving most of us with dim prospects. Yet so many of our young musicians and artists are happy to bury their heads in the sand, talk about old cartoons, fondle their smart phones, and pass out on life’s couch. Social consciousness in music isn’t uncool these days—it’s a completely alien concept. Music doesn’t have to be meaningless fun. American is intuitive, emotional and propulsive music that actually means something.