Justin Townes Earle and The Pain of Having Roots

A beautiful homage to family and home. 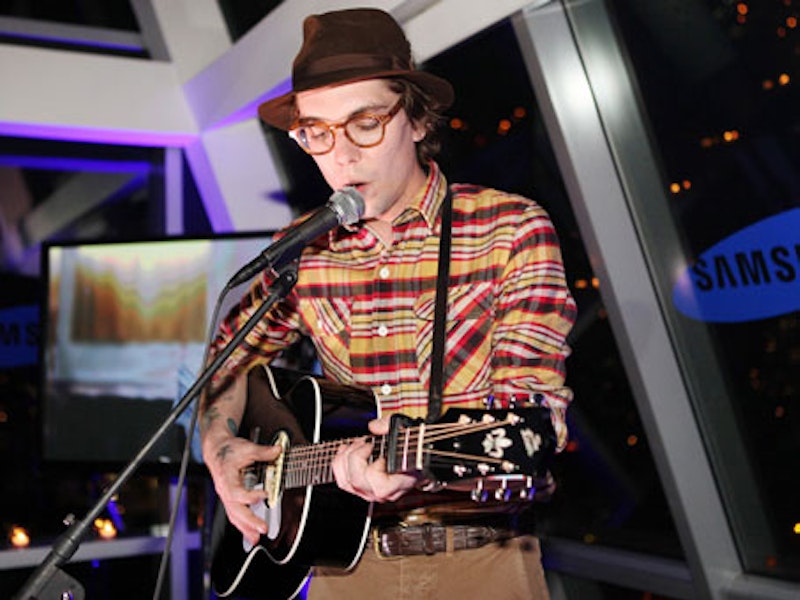 "Am I that lonely tonight?/I don't know," Justin Townes Earle sings on the first track of his new album Nothing's Going to Change the Way You Feel About Me Now. The confusion slides through the entire album—not because Earle lacks focus, but rather because his focus is precisely that confusion. Earle's adrift in his own skull, a ghost haunting his own heart. He's the Nick Drake of roots rock.

That's a juxtaposition that doesn't sound like it should work at all. Roots music is about knowing where you are and pounding your stake in the ground with all the earthy authenticity you can muster. It's about referencing a tradition and flaunting it. For Earle, though, the tradition and the authenticity both fold into a kind of broken meditation. Instead of setting himself in a tradition, the roots rock touches seem to empty him out.

In part, this is because the country roots tradition for Earle is linked so strongly to his father. Steve Earle is referenced lyrically a time or two—most notably in that initial song, where the first words are "Hear my father on the radio, singin' 'Take me home again.'" But even when Justin's not talking about him, Steve is everywhere on the album—in the son's rough, slurred phrasing, in lyrics about being strung out and messed up as his Dad famously was, and, of course, in the whole endeavor itself, as he spends his life and his career rolled up in his Dad's oversized shoes.

The result is that Justin seems, throughout the album, like a double of himself; his roots are twisted inside out, so they don't so much anchor him as alienate him from his own identity. Earle is certainly aware of this; his lyrics circle relentlessly around his inability to penetrate his own skull or hold onto his own life. On "Won't Be the Last Time," the guitar plinks here and there and his voice drags over the lyrics as he admits he can't remember what he's done, can't figure out where he's going, and can't promise to do any better. Steve Earle's loser persona was often shot through with braggadocio and white trash tough-guy swagger—as with the pistol-packing outlaw of "Devil's Right Hand." Justin Townes Earle, on the other hand, sounds genuinely disgusted with himself and his life. Even the title track, about how his girlfriend can't forget him, sounds more sad than triumphant; he ends up sympathizing with her rather than himself, wishing she'd dump his sorry ass even though he knows she won't.

Musically, the album also sounds like it's somehow taken a left turn and ended up as its own doppelganger. Earle may have the edge and shoulder-shrugging shuffle of outlaw country, but many of the tunes here are drenched in soulful horns. The result is unexpectedly both disorienting and touching.  "Look the Other Way" ends up sounding like a transmission from a world in which Merle Haggard and Otis Redding could have lived together on the same radio dial—where "Mama Tried' and "Sittin' on the Dock of the Bay" could have spoken to the same people about the same loss.  The result is less a celebration of roots music than a kind of sad lament for its missed opportunities. Past distances echo down through the present like a mournful chord that's wandered in from someone else's song.

Nothing's Gonna Change isn't a lugubrious album; many of the tracks are upbeat. But even the cheerful songs have a bittersweet edge. "Movin' On," for example, seems like it should be an open road homage, from its title to its jaunty swing. But instead the bulk of it is about a conversation between Earle and his mother, which ends with him musing, "Maybe I should go back/back to the night where it all began/Maybe I should trace my life back/to the night when my folks first met/Maybe I could find the moment where my father broke my mother's heart in half." Earle can't get away from his past; his self is too closely intermeshed with those who made him. For sons of famous fathers, that's usually a puerile truth—but Earle imbues it with tragedy and with love. His dad should be proud.