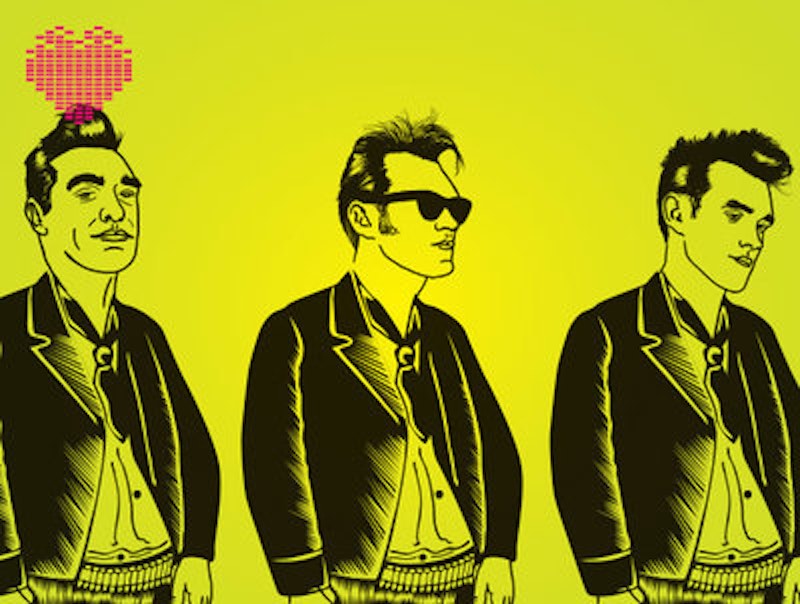 When Katy Perry dresses like a geisha and mugs as she hides behind a fan, that's cultural appropriation. Perry isn't expressing a love of Japanese culture, or even an interest in it; she's just using received notions of Japanese people as exotic and sexy to make herself seem exotic and sexy. The singer's various exercises in Orientalist dress-up verge on blackface; they present invidious stereotypes as entertainment.

The wonderful Mexrrissey project, led by DJ Camilo Lara, takes a very different approach to cultural borrowing. The Mexican music supergroup's No Manchester: Mexico Goes Morrissey is, as it says, a tribute to English singer Morrissey. The album features Spanish language versions of Morrissey songs arranged in Tejano style by a loose collection of Mexican and Mexican-American musicians.

Like Perry, Mexrrissey borrows from a culture that isn't theirs—that culture being Morrissey's run-down, gray, enervated northern England. "This is the coastal town/That they forgot to close down/Armageddon—come, Armageddon!" the singer moans, calling down nuclear fire upon all that is drear. And in response, Mexrrissey laments, "Todo los dias son domingo; cada dia es triste y gris."

Mexrrissey isn't pretending to be Morrissey as a kind of dress up. Instead, they're (literally) translating him. Morrissey's bleak sense of dislocation from the working class tourist trap town is in part about being a gay man from an Irish immigrant family. It makes sense that that resonates with people who are between cultures and countries. Morrissey's lachrymose jangly pop, drenched in nostalgia for an uncertain past, becomes plangent Mexican horns, calling back to a home that grows more vibrant in the imagination. Morrissey sings "a strange dust lands on your hands/and on your face," which Mexrrissey turns to "on your face, en tu face, on your face." The lyrics switch between English and Spanish, as if Morrissey himself is the strange dust that settles on them, giving them new words, so they end up speaking two languages at once.

One of the more inspired, and inevitable choices for Mexrrissey is Morrissey's "Mexico." The song starts out in exotica Katy Perry mode, with Mexico as a playground for the Western romantic imagination. "In Mexico/I went for a walk to inhale/the tranquil, cool, lover's air." But that taste soon turns to "American chemical waste," and romance shudders beneath the imperial shadow. "It seems if you're rich and you're white/you'll be all right/I just don't see why/that should be so."

For Morrissey, the song is a skewering of cultural appropriation, a reminder that when you're rich and white you can breathe in other cultures without worrying about the lives of the folks you're sucking down. When Mexrrissey sings it, it becomes less arch, a love song to a home under siege. Or, if you prefer, it becomes more arch, as the singer imagines himself as some maudlin Anglo imagining himself. It's a cycle of displaced sadness that ends, for Mexrrissey in a distorted fade out—a kind of cultural tourism pratfall.

Part of what makes Mexrrissey works is that awkward band name. The group is paying tribute, not to some hazy second-hand version of Englishness, but to Morrissey himself, a particular songwriter with a particular vision. Mexrrissey isn't just appropriating Morrissey, nor even just appreciating him. They're collaborating with him, taking his ideas and words and adding their own arrangements and spin to come up with something from multiple cultures about living on the border of multiple cultures.

"I am the last of the famous international playboys," Morrissey declares, and Mexrrissey's Ceci Bastida answers, "Yo soy la ultima playgirl, international playgirl, yo soy." Morrissey's joking about the jet-setting lifestyle; his portraits of the wealthy are always soaked in working-class bile. But Mexrrissey turns his irony around; by playing his songs, they show that music really can cross national boundaries. Mexrrissey doesn't appropriate Morrissey; instead, they show he was speaking Spanish the whole time.