Getting into David Bowie just as his Spiders From Mars line-up was breaking up, just missing them in Boston. 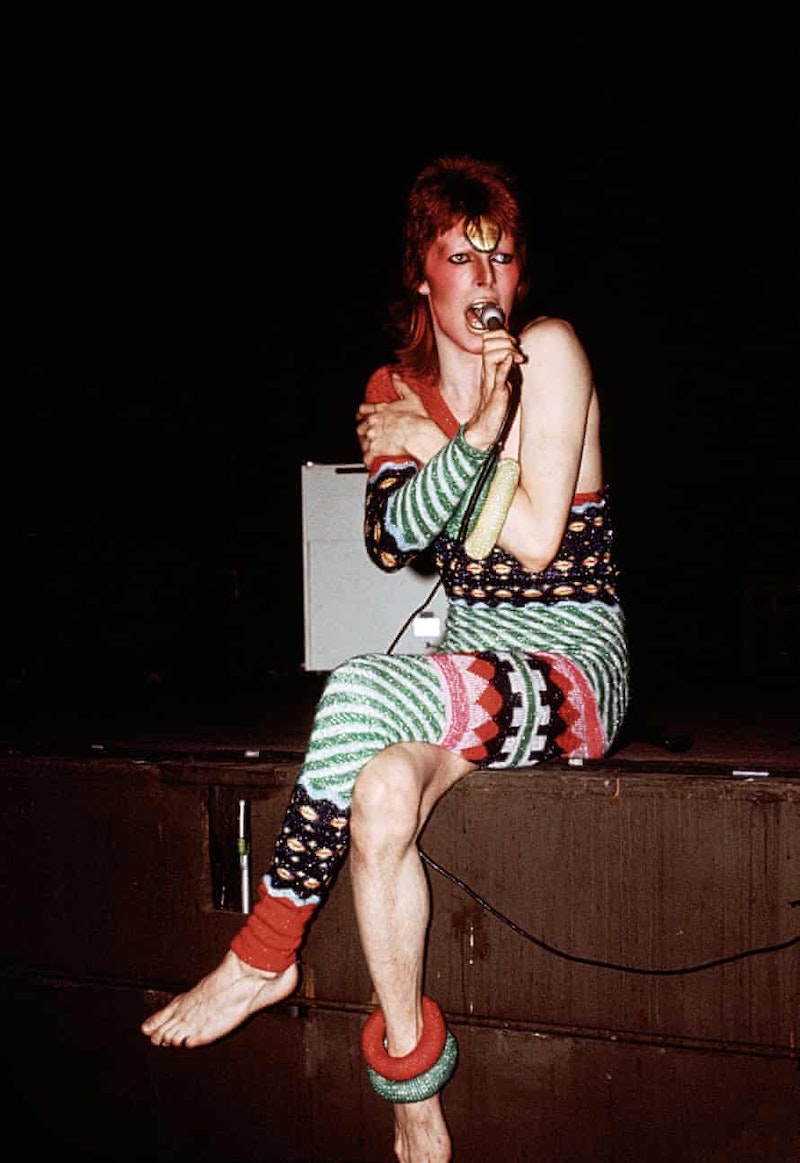 I’ve been listening to David Bowie since the 1970s, and am still disappointed that his Spiders From Mars line-up only existed for two records. That grouping consisted of Woody Woodmansey on drums, Mick Ronson on guitar, Trevor Bolder on bass, and Bowie. The two recordings are Ziggy Stardust, and Aladdin Sane.

The first I heard Bowie was “Space Oddity,” released in July of '69, just before the Apollo moon landing. The song was moody, about an astronaut choosing to float away into eternity. It sounded great and was well-produced. I liked the song and its wistful storyline, but wrote it off as a novelty item, like “Purple People Eater” and “Monster Mash.” Bowie might be capitalizing on Apollo, but he wasn’t going anywhere fast.

Ziggy Stardust was released in June of 1972, but I merely studied the cover. Many of the song titles hinted at outer space, and I made a stupid judgment that here was phase two of “Space Oddity.” Besides, I’d already spent my allowance on Stones tickets for the STP tour when they came to Boston in July. Both shows. To me, these represented the epitome of what a rock band should look and sound like. I didn't even want to hear any other music after those two shows. I wanted to be Keith Richards.

Shortly after, Selective Service called my draft number. I passed my army physical, burned my draft card, took the alias Bill Wyman, and hibernated out west for a while. I saw many bands in those days, but didn't have a turntable and wasn't in the LP market.

In the summer of 1973 my friend Sinky came home with vinyl tucked under his arm, and said, "Man, listen to this. The Stones are finished." The LP was Aladdin Sane. The very first track, “Watch That Man,” contained the lines "There was an old fashioned band of married men, looking up to me for encouragement." Later, same song: "He talks like a jerk, but he could eat you with a fork and spoon." I had difficulty thinking Bowie might be referring to Jagger, who was still at his peak. The guitar was loud and crunchy; it sounded like a Les Paul and Marshall set-up to me. The record didn’t let up. A song about a used-up actor paying for prostitute sex. Another, about some future time where people need books and videos to remember how to have sex. The stupid good drums on “Panic In Detroit.” I was fairly shocked at how well the records was written and assembled; this was much more than just another rock band. That’s when I first took notice of the players. Now they’d added Mike Garson on piano.

But I wasn’t ready to give up on the mighty Stones. Exile was still on my mind, and  represented the Stones at the top of their game. I put a lot of their greatness on the songwriting, and on Mick Taylor's lead guitar work. I'd grown up with and loved the Brian Jones version of the Stones, but with Taylor they became a serious guitar band.

But I admitted to Sinky that the Stones were under attack. "When people stared in Jagger's eyes and scored" from “Drive In Saturday” seemed directed at me personally. Was I stuck in the past? I had to get Ziggy Stardust to see where Bowie had come from. It didn't take long. Ziggy was an outstanding recording, sort of a concept album about an alien/rocker come to Earth. The songs were melodic, lyrical, full of guitar. “Five Years” and “Moonage Daydream” became favorites.

The final Spiders show took place in July 1973, just as I was hearing Aladdin Sane for the first time. Bowie broke up the band shortly thereafter, much to their surprise. He said that the character of Ziggy was driving him nuts, and he needed to change direction. Only Garson appears on the next (not considering Pin-Ups here) record, Diamond Dogs.

I ended up with a lot of David Bowie's records, including various Spiders bootlegs, especially the Santa Monica one that became a CD. The Man Who Sold The World was a great record featuring pre-Spiders Ronson and Woodmansey. Hunky Dory. Station To Station. Diamond Dogs. Only the Stones (I was never that big on The Beatles, but maybe them, too) had strung together so many terrific records without filler.

I went to a bunch of Bowie shows, including one during the Reality Tour, Bowie's last. They didn’t play one song from Aladdin Sane (I read that it was Bowie’s least favorite album), but Garson threw in a few riffs from the title cut. I saw Bowie as Joseph (John) Merrick on Broadway, in The Elephant Man. I came to see Bowie as an absurdly talented actor and songwriter. It occurred to me that it took two Beatles to create their catalog, and two Stones to do the same. I realized how tired I was of Jagger’s prancing and preening. Bowie was all about finding new directions, while, to me, the Stones were stagnating.

Looking back, I can't believe I missed the only Spiders show in Boston. I was still being Mr. Wyman from Denver at the time, and wouldn’t even hear of Aladdin Sane for a few months. It still pisses me off.