Kids in the Back

In the Vietnam era, high schoolers working behind the scenes in entertainment were rare. Washington, DC’s Leonard Schwab was an exception. 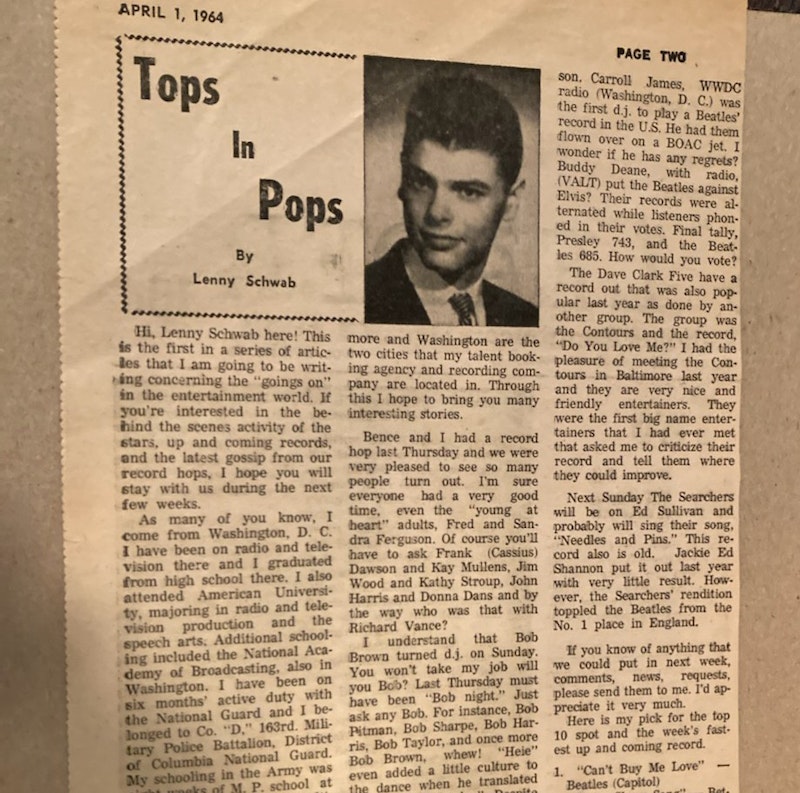 The teen culture explosion of the Vietnam era was driven by music made by and for young people. With so many jamming up stages, dance floors, and sound booths, it was a rarity to find high schoolers working behind the scenes in entertainment. Washington, DC’s Leonard Schwab was one of those rare young people who expressed his passion for music with crucial support for the creative efforts of his peers. In DelMarVa music’s pre-disco heyday Schwab was a multi-media force of nature. From releasing some of the region’s greatest records via his Montgomery Records imprint and other labels, to collaborating on projects with fellow indie legend Ray Vernon, to booking, promoting, and producing concerts for international stars and lo-fi cult favorites, to rubbing shoulders with Phil Spector, Teddy Randazzo, Link Wray, Milt Grant, and other early giants of 1960s pop, across the board Schwab’s accomplishments were ambitious and groundbreaking.

Along with his youthful music biz origins, what makes Schwab’s story so fascinating is the timing of his success. Rock ’n’ roll was still a challenging form of music when Schwab hit the ground running during the first decade of the genre’s mainstream breakthrough. Rigid stylistic pigeonholes and niche marketing had yet to control the vibrant new form. Rock was wandering off in cultural directions that society had just become aware of. Regardless of risks and uncertainty, Schwab did everything he could to stay in step with teen fads and the grass roots fringe. During the 60s these two concepts often overlapped.

Schwab began working in entertainment at 17 when he booked DC doo-wop group The True Tones and local garage rockers The Newports in Bethesda, MD at his high school’s junior prom (both groups would go on to play large and positive roles in shaping his career). Work as a promoter stayed steady and he remained active in the local music scene as he headed off to DC’s American University. A college fraternity social event helmed by Schwab received promotional assistance from broadcast legend Milt Grant, Schwab’s favorite local on-air personality and one of DC’s biggest local stars. This was the first of their many collaborations, and proved be the most pivotal moment in the teen impresario’s career.

Milt Grant is primarily remembered now for unintentionally inspiring Link Wray’s “Rumble”; the guitarist debuted his signature song at a Fredericksburg, VA record hop produced and hosted by Grant who also hosted a popular TV dance party program on WTTG Channel 5. The Milt Grant Show was a hit with local teens and historically/politically important for being one of the first regional TV programs to cater to African-American music audiences. This latter element was one reason why his TV show was cancelled by TTG’s predominantly conservative bosses. Always one step ahead of trends, he then continued his pioneering media work by founding, owning, and operating the DC area’s first UHF TV channel, WDCA Channel 20. Schwab’s AMU social was a big success that impressed Grant. From then on he made sure to include the young hopeful in many of his enterprises.

Leonard Schwab: “Milt and I developed a friendship after he asked me to be a "regular" on his [TV] show which I did every day after school. This exposure to bands, music, and booking groups was all it took to get me interested in the music business. So, that's how it started and I formed Leonard Schwab Productions [a.k.a. L.S.P.] to act as a source of entertainment for organizations, schools or anyone interested in finding bands, etc. [L.S.P. was also the name of a record label run by Schwab]. My meeting Milt Grant not only opened my eyes to the music industry but also introduced me to the vast radio/tv opportunities that existed.

“Milt's show was abruptly cancelled. I was so disappointed to hear this but when Milt asked me to continue to work with him, I was thrilled. He went on to establish a multi-station broadcast of his show on radio [via popular DC area stations WINX, WAVA, WEEL, and WPGC]. I assisted him in obtaining information on news from various high schools in and around DC.

“I decided to attend American University majoring in radio/tv broadcasting. I was fortunate to land a position on their radio station, WAMU, doing a music show every weekday and Saturday. While there, I met another student also with the same major, and we decided to do the radio show together. He told me that his great-uncle owned a record distributing company in DC and we went to meet him and his staff. I had no way of knowing at that time the impact that that meeting would have on my future.

“My friend's great-uncle was the founder and owner of Schwartz Brothers, one of the largest record distributors, if not the largest on the East Coast. Mr. Schwartz's sons (who took over the business upon his death) were always gracious... The director of promotions, promotion team, and the sales staff were helpful, especially when it came to listening to tapes, acetates of music from the groups I was working with, and just giving professional advice.”

Schwartz Brothers remained a major mid-Atlantic player until the early-1980s when its services were dropped by Motown and Arista, two primary clients. This misfortune revealed much about the distributor’s connection to the record industry’s informal halcyon days. The brothers brought a $5 million lawsuit against Motown after the label entered into a larger exclusive distribution deal with MCA Records. The suit was difficult as all of Schwartz Brothers’ dealings with Motown had been handshake agreements made during the better part of the Detroit company’s first three decades of mega-hit success. It barely put a ding in Motown’s armor and was the first of several incidents that led to Schwartz Brothers’ early-1990s bankruptcy. As a final testament to their power—while litigation continued—for a brief period in the 80s new copies of Motown releases became unobtainable at all locations of the Schwartz-owned record store chain Harmony Hut and most other DelMarVa record stores.

There wasn’t a hint of the distributor’s 1990s decline back in the 60s. Schwab’s association with The Schwarz Brothers and Milt Grant blessed him with a host of entertainment ties. Max Silverman (owner of the Waxie Maxie's record store chain), jazz impresario Ira Sabin, Wheaton DJ Don Dillard (WDON), Barry "Turn On" Richards, Bob Edson and Dick Denham of WINX in Rockville, MD., the legendary Jack Alix of WPGC, and NYC hit maker Bert Russell aka Bert Berns (best known as the songwriter/producer behind The Isley Brothers’ “Twist and Shout”) were just a few of these major figures.

Two other big names who supported Schwab’s efforts were The Feld Brothers, Israel and Irvin. The Felds got their start selling herbal remedies at carnivals throughout the U.S. prior to World War II. After they set up a base of operations in DC, Israel Feld founded and operated the popular drug store-turned-record shop chain Super Music City, while Irvin Feld worked as Paul Anka's manager. Together the brothers became well-known for booking high profile music events with national acts, most notably at Rock Creek Park’s Carter Barron outdoor venue and a massive concert/wedding event with Sister Rosetta Tharpe at Griffith Stadium. Later The Felds became owners of The Ringling Bros./Barnum and Baily Circus.

Leonard Schwab: “My stay at American University was short-lived as I felt my career wasn't moving as fast as I wanted so I entered the National Academy of Broadcasting.”

Soon after graduating from The N.A.B. in 1964 Schwab was hired as a DJ on WVAR in Richwood, West Va. (near Charleston). WVAR was owned by regional media mogul Courtney Evans who also owned a radio station in Seaford, DE. Concurrently to the DJ job he also wrote a music/entertainment news column that ran for one year in a West Virginia newspaper called The News Leader.

Leonard Schwab: “I was now out of school… and worried about my draft classification as the war in Vietnam heated up. I decided, along with several of my friends, to join the DC National Guard to avoid being drafted. A wise decision as it turned out. I put my business on hold for six months so I could complete my basic training, Military Police School, and two months of duty. I returned home eager to get things rolling again."