On A Love That’s Sound, a lesser known album by The 13th Floor Elevators. 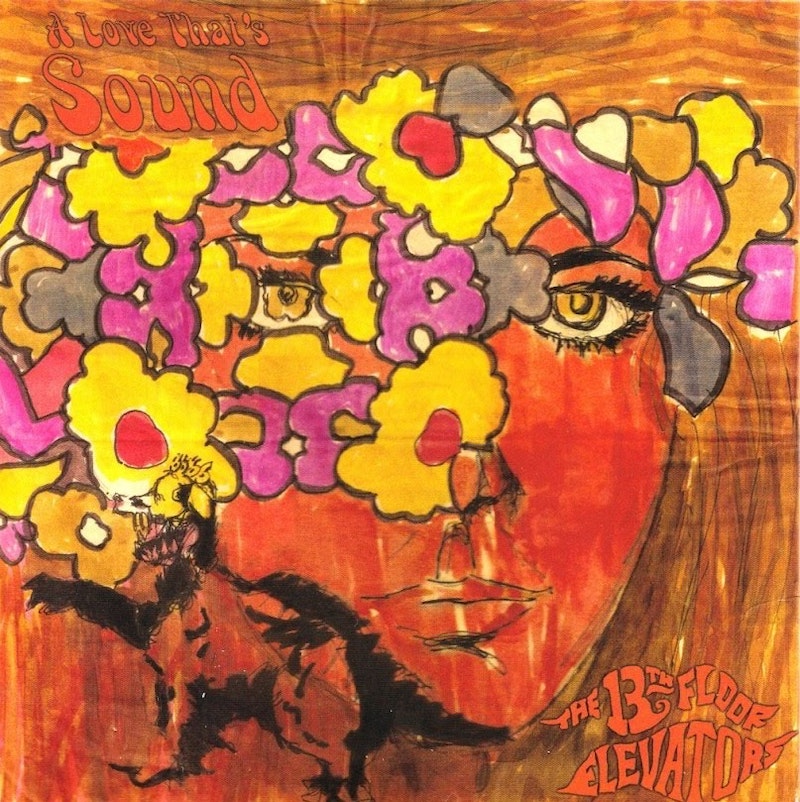 The Texas band 13th Floor Elevators became iconic for their noisy guitar twang, brutal lead screamer Roky Erickson, the acid-drenched lyrics of electric jug player Tommy Hall, and their use of psychoactive drugs which was heavy even by 1960s standards. These latter indiscretions proved to be tragic: after getting busted for possession Erickson—who was already undergoing drug-related psychiatric treatment—was sentenced to time in a mental institution where he was subjected to the shock therapy that would leave his mind damaged forever. From that point on The Elevators became more inactive, breaking up and re-grouping several times before splitting around 1973.

The Elevators’ story is one that has been re-told countless times since the late-60s. They immortalized this mythical narrative in music that took listeners beyond reality and back again throughout the course of three landmark albums that defined psychedelic punk. In 1969, 13th Floor Elevators released their fourth and last official studio record. This weird song cycle was titled Bull Of The Woods and it pushed the group into a new melodic direction with tracks like “Scarlet and Gold” and “Rose And The Thorn” that boasted crisp vocals and thick power chords. Despite these blissful high points Bull Of The Woods had an uneven production style born of the distractions that caused The Elevators’ break up.

Between 1967’s Easter Everywhere and before 1968’s Elevators Live! the group began recording A Love That’s Sound, an album that shared several tracks with Bull Of The Woods. Before completing the sessions Roky Erickson’s mental issues derailed plans for the record’s release. The surviving set of master tapes from this “great lost” album were only re-discovered decades later when music archivist Paul Drummond began assembling The Sign Of The Three Eyed Men, the definitive 13 Floor Elevators CD omnibus which came out in 2009 (the 2011 Elevators’ vinyl set Music Of The Spheres also includes A Love That’s Sound).

Almost a full decade went by and A Love That’s Sound remained a record known only to Elevators mega fans and serious collectors until 2019 when the Charly label put out an affordable double CD version of Bull Of The Woods. The second disc of this newest Bull re-issue features A Love That’s Sound in its entirety, finally liberated from the pricey box set market. Had this album been released in the 60s it would’ve added a whole new chapter to the Elevators saga and a fresh understanding of their musical approach.

What makes A Love That’s Sound stand out when compared to other underground 60s rock albums is how its blatant sense of pop melody intertwines fluidly with hard rock arrangements, a formula mainly associated with 1970s power pop artists like Big Star, The Raspberries, Cheap Trick, etc. These qualities shine thanks to the singing and songwriting of rhythm guitarist Stacy Sutherland whose creative contributions dominate both A Love… and Bull Of The Woods. Sutherland’s deep croon and easy going melodies combine to paint bright sonic pictures that bear little resemblance to the cosmic angst and high lonesome mysticism of the first two Elevators’ LPs. In their pre-Bull Of The Woods form, tunes like “Wait For My Love” (aka “Til Then”) and “Dr. Doom,” and exclusive tracks like the soul-blasted “It’s You” spotlight sweet harmonies sailing gently upon waves of heavy guitar, with drums that evoke the pounding energy of Creedence Clearwater Revival or The Flamin’ Groovies—a departure from the mannered jazz drumming on Easter Everywhere and the angular surf rock beats of their ‘66 debut.

On A Love That’s Sound, The 13th Floor Elevators became a soapbox for Stacy Sutherland’s melodic prophecy—a new hopeful kind of rock ’n’ roll tailor-made for the ultimate comedown. Music that can rejuvenate bodies and minds pushed to sanity’s edge didn’t represent a common interest in society until after the counterculture’s implosion. That such a nascent form of this expression could remain hidden long after that solidifies The Elevators’ legacy as a rock group who pioneered new forms of music and living.