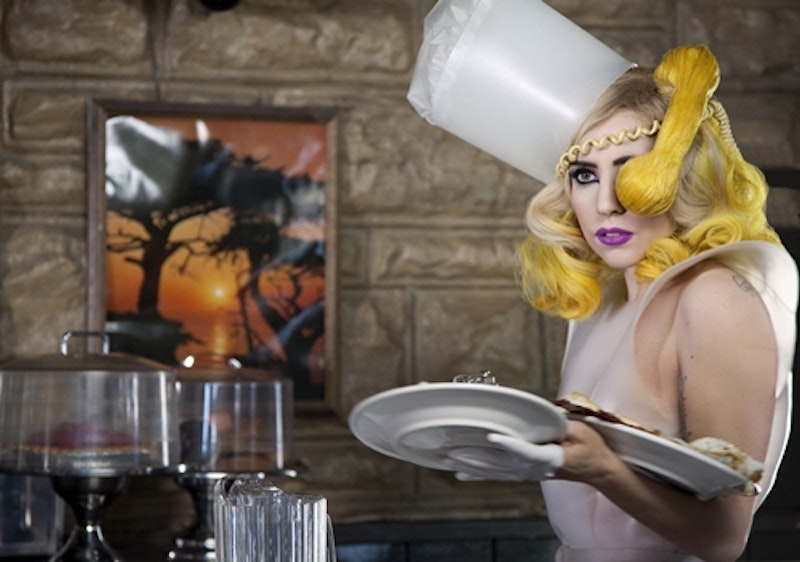 In little over a year, Lady Gaga has hit a point of unprecedented, meteoric stardom, thanks to an audience of teenaged sycophants and unrepentant hipsters who like shiny things. At first, this might seem like one of the greatest offenses that humanity has ever perpetrated upon the sanctity of art and music, but I can finally see through it, after months of rage.

While I don’t want to lend any more momentum to the whole Lady Gaga Event, something needs to be said about what passes for art, and its actual relationship to art. My conclusion is this: Lady Gaga is the greatest Dadaist that the world has ever seen.
Dadaism, which is an oft-forgotten arts and cultural movement that rose to prominence in the early 1920s, existed to criticize the prevailing thoughts about art and culture. In effect, Dadaism is the anti-art, and one of the most critical points in history regarding the perception of what art actually is. The name itself is complete nonsense, relating to and apropos of nothing—a very literal signifier of the meaninglessness and anarchy that the movement embraced.

Lady Gaga possesses absolutely no substance. She’s created epic, theatrical music videos about how her cell phone service sucks, riddled with sexual clichés, product placement, and countless costume changes. She subscribes to the philosophies of Andy Warhol as if they were Biblical verse, and that which is created around her are just as manufactured and soulless as the things which Warhol himself strove to create. Careless, indifferent responses during televised interviews are a meticulously constructed wall against revealing any sense of personality or identity beyond whatever dollar-store refuse costume she’s currently wearing. In essence, it is completely about style, and a conscious effort to eliminate substance.

It’s not the first time that a musician has used a wall of obfuscation as a critical element of their musical output. Jandek remained completely anonymous for decades, admitting only to being “a representative from Corwood Industries” before he began performing live concerts. The actual identities of The Residents are a fiercely guarded (but otherwise fairly obvious) secret. DEVO maintained their de-evolution philosophies during interviews as well, giving them more importance than the music they were actually writing. The Gorillaz and Dethklok are cartoons.

This isn’t even the first time that elaborate costumes have been used in Dadaism. See: Rrose Sélavy, the strange alter-ego of Marcel Duchamp. While ostensibly transparent, and quite often almost naked, I think that Lady Gaga has completely fooled us all.

The irony of dating a guy who actually calls himself “Dada.” The fact that one of her songs is about her impenetrable motives due to her implacable “Poker Face.” The “Fame Monster” album cover which references The Golem, a creature whose very life is complete artifice. These are all “Paul Is Dead” style clues to a larger puzzle that are ignored, probably because they’re too difficult for the mainstream media to comprehend. If Dadaism were ever dropped on MTV, their anti-intellectualist manifesto would almost definitely censor it to make more time for fake boobs and casual sex.

Lady Gaga is a smart woman, despite the way that she sells herself. In New York, she says, “Once you learn how to think about art, you can teach yourself.” This is a statement I’ve lived by for at least a decade, and the last person I ever expected to relate to was Lady Gaga.

While her fans are unlikely to see the irony that they are the exact entities that she’s criticizing, I hope that Lady Gaga is employing some kind of Sun Tzu’s “know thy enemy” strategy, and that her real motives are elevated beyond selling sex to tweens so that she can get a bigger house. There’s a difference between becoming what will make you famous for the sake of fame, and doing it for the sake of commentary and art. At some point, I hope that the curtains will be drawn back, and talented songwriter Stefani Germanotta will step forward, and say, “Fooled you.”

And then we can totally make out.