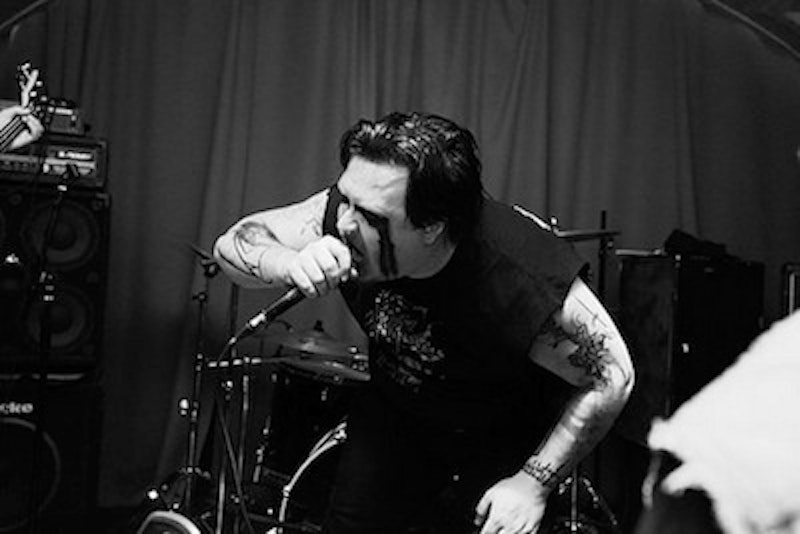 Unlike most United States black metal bands, New Jersey's Krieg has no interest in getting past the bratty clatter of their second-wave Scandinavian influences. Songs don't get symphonic, they're not injected with overt nods to the avant-garde, and they sure as hell aren't finding space for horns, dance rhythms, or whatever else is supposed to differentiate the experimental Americans from their conservative European forefathers. Krieg make raw, uncooked black metal: pummeling drums, buzzing scuzzy wall of noise guitars, and pained depressed vocals.

Yet, the group's approach isn't hopelessly “true” either. 2004's The Black House featured a cover of The Velvet Underground's “Venus In Furs,” 2006's Blue Miasma was uncharacteristically virtuoso-like and full of ridiculous movie samples, and though it doesn't sound all that different from their previous records, The Isolationist, the new one, is produced by Sanford Parker, best known for his work with experimental metallers like Pelican, Yakuza, and Nachtmystium.

Parker, along with Imperial—Krieg's vocalist and really, the only constant member of the group—don't expand on the signature raw sound at all, they find simple, creative ways to maximize the Krieg's un-hedged energy and one-of-a-kind desperation. Imperial is a fascinating metal vocalist who avoids the rote theatrical shriek and cookie monster growl, for a bottomless, very human wail. The vocal trick on The Isolationist is layering that wail—like some perverse take on harmonizing—to create waves of palpable suffering. A few times, Imperial buries more naturalistic vocals (there's a Roger Daltrey-like shout on “Depakote”) under the black metal shouts (this seems like a Parker production touch), and it's all the more eerie, because you're hearing the regular dude behind the evil persona and he sounds just as disturbed.

Instrumental production flourishes are equally bare bones—like garage-rock's quiet, turning innovation brought to metal's darkest genre. “All Paths To God” somehow grows more sinister with the late-song introduction of a politely strummed guitar. A little bit of echo is added to Imperial's howl on “Blue Of Noon.” The guitar solos are strangled, screeching things, like somebody shredding with broken glass. There are two grim drum solos: “Religion III” and “Remission.” And when Krieg occasionally look beyond black metal, it's always a quick nod to some other form of heavy, extreme music: Merzbow-like white noise (“And The Star Fall On”), propulsive power metal (“Ambergeist”), and straight thrash (“Dead Windows”).

The Isolationist's true head-scratcher though is “Depakote,” an unabashedly experimental track that derails the black metal racket at about the half-way point, allowing backwards, looped drums (like “Paul Revere” by the Beastie Boys) and a maelstrom of screams to take over. Not long after however, “Depakote” bends back into a black metal blast. It's like Imperial felt constrained, not by genre limits, but by the possibility of a sound that wasn't relentlessly bleak nihilism. That late-song shift back to Krieg's signature sound speaks to The Isolationist's hopelessness: An album weary of freedom that only finds comfort in self-imposed shackles.