Listening to Iron and Wine's latest, Kiss Each Other Clean. 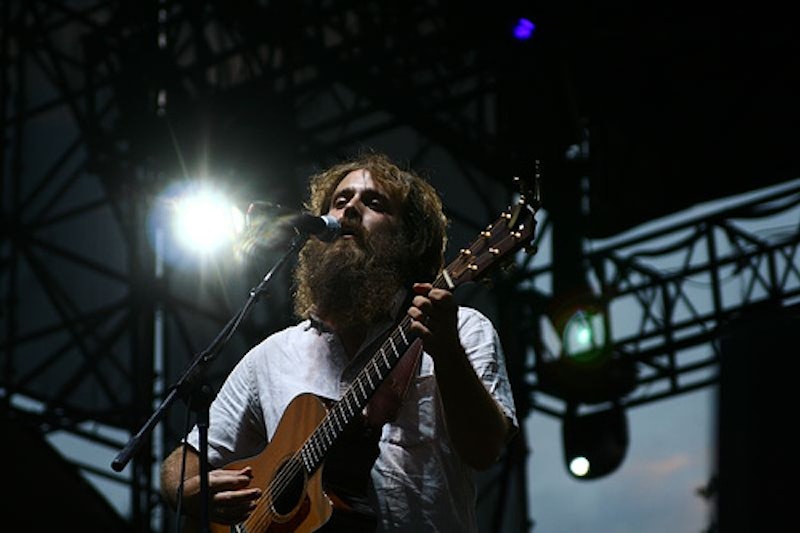 About a sad man lost in the hammock sway
When the bridal gown came mama spit out the window
And the cops say the dog won't bite
And the sad man's staying they’ve forgotten when
And the blood running black in the valley shadows
And the river running all the while.

That’s from Iron and Wine’s (aka Samuel Beam’s) “Glad Man Singing.” An acoustic version closes his latest album, Kiss Each Other Clean. For this verse, the guitar drops out and Beam sings the lyrics in an earnest slow, almost spoken hush. He ends up sounding eerily like Don McLean from “American Pie.”

I’ve always had a soft spot for McLean’s ode to Buddy Holly and the 1950s—the pseudo-Dylanesque, Beat-crap lyrics, the endless maudlin woozy-headed paean to crisp, concise bubblegum pop. Released in 1971, it pointed to the grotesque bloating of white pop rock, lamenting the loss of vibrant popabilly even as it laboriously pounded a stake through its heart.

It took a while for the staking to take; grotesque bloated white pop rock is pretty great as it turns out, and the 70s were the absolute high point of the genre. Better Zeppelin than Dylan any day, damn it.

Still, if McLean wasn’t exactly timely, he was prescient. Thirty years later, disco, electronica, hip hop, and their innumerable crossbred progeny have left white rockers who don’t play metal with little to their name but insistent nostalgia. Iron and Wine’s glance back at McLean’s glance back is a perfect self-referential parable. It’s nostalgia, still wrapped in pseudo-Dylanesque garble, nonsense not so much because Beam has nothing to say as because his daddy’s daddy had nothing to say—and he loves that granddaddy.

And, you know, I love that granddaddy too. Iron and Wine has the 60s sensitive eccentric genius thing down cold, from Nick Drake to Donovan. “Half Moon” steals a gentle loping country vibe and harmonies from the Byrds or CSNY; “Me and Lazarus” is honking semi-funk which suggests some of Brian Wilson’s wiggier moments, with some off-kilter dissonance towards the end that touches on Syd Barrett. And so forth. Kiss Each Other Clean feels like it dropped out of a hole from a nether decade; it’s a long-beloved classic (300—something on Rolling Stone’s 500 best albums of all time!) that you just somehow managed to overlook.

The only problem is that part of being an eccentric genius is sounding different than all the other eccentric geniuses. When eccentric genius becomes a formula in itself—or an act of homage—it starts to seem like someone’s missing the point. Kiss Each Other Clean is a lovely album in the vein of Pet Sounds or The Notorious Byrd Brothers or Court and Spark or Pink Moon. But it can’t matter like those albums did, because those albums already mattered first. Beam took his Chevy to the levy, and the levy wasn’t dry. Just familiar.