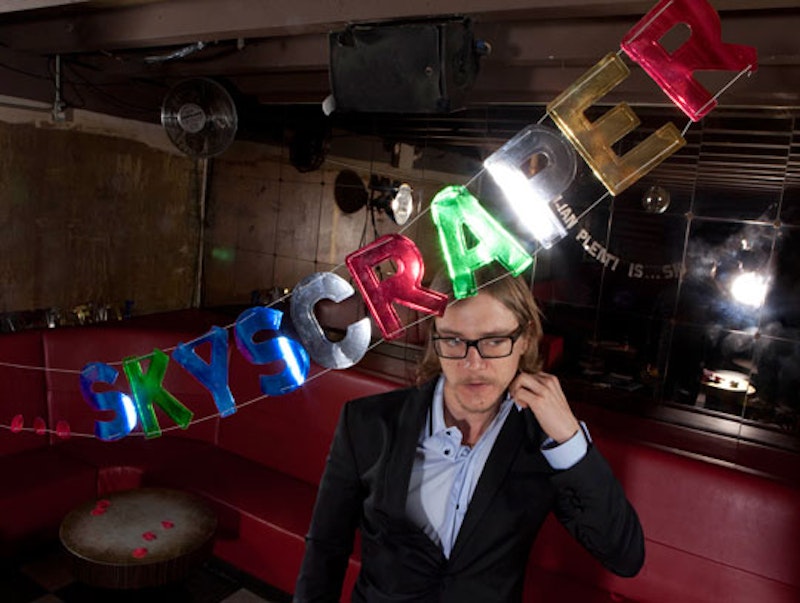 Julian Plenti is...Skyscraper by Julian Plenti (Interpol's Paul Banks) is further confirmation that the tortured soul of Turn on the Bright Lights and the slovenly debonair crooner of Antics is long dead, only to be replaced by a cocky, aloof whimsy that is off-putting at best. While this transformation is not exactly unexpected (Interpol's 2007 dump of a record Our Love to Admire showcased the same tone-deaf bravura present here), it is disheartening for all those who believed that this band could sustain itself past two great records.

The biggest problem with Banks' fey alter ego is that it’s impossible to relate to him. Instead of fractured relationships and big city loneliness, Banks sings about all the women he's fucked since he's become famous and how good he is at doing it.
You have to think what got into the man to sing such a stupid line as "Girl on the sporting news/I just want to tell you one thing/You've got the kind of sex appeal that doesn't get a guy like me down." Throughout Interpol's career, people have questioned Banks' often obtuse and mercurial lyrics, and it is a shame that more don't take them seriously, because most of the stuff on Interpol's first two albums is pretty fantastic. He had a way with words that straddled the line between poignant and absurd. It was up to the listener to decide which side to take; unfortunately, most couldn't get past "Obstacle 1"'s "Her stories are boring and stuff/She's always calling my bluff."

I've developed a strong personal connection to those first two Interpol albums and their associated B-sides. Rarely a day goes by where I don't listen to part of TOTBL at least once. That record and its equally impressive follow-up Antics are imbued with a sense of cool and sophistication that didn't seem aloof or holier than thou, something that can’t be said for their post-2005 output. It seems that the money and status of being a major label band has gone to Banks' and his bandmates' heads—that would explain often-mocked bassist's Carlos Dengler's ridiculous essay on the nature of celebrity that accompanied his equally pretentious short film My Friends Told Me About You. Now Banks has turned in something just as bloated and self-indulgent.

Musically, the album's sound is diverse to a fault. Skyscraper lacks the cohesion that made TOTBL and Antics real statements, and what it feels like is a scattershot collection of songs that weren't good enough for Banks' main gig. The songwriting is frustratingly simple and repetitive, and the guitar playing is questionable at best. Without the support of Interpol's driving rhythm section, Banks' staccato riffs feel wooden and forced, and at times it feels like you're listening to a St. Sanders video. "H," the album's instrumental closer, sounds as bland and safe as a piece of elevator muzak; the main piano line plods along as if played by a computer. The two legitimately great songs on the record, "Skyscraper" and "On the Esplanade," succeed because their relative minimalism stands in contrast to the pomp and bombast of the rest of the record. Banks fares best when he sticks to what he knows: simple guitar riffs. The synthesizer and string accompaniments on the rest of the album seem out of place; don't even get me started on the retarded bleeps and bloops that decorate "Fun That We Have."

The saddest thing about listening to Julian Plenti is...Skyscraper is the fact that Banks wrote most of these songs before Interpol even existed. What could have been? What if he had released this record or a record like it back in 2001, before his voice got higher and he started wearing designer suits? The day Skyscraper was announced, three live recordings from 2000 or so surfaced: "Cellophane," "The Larynx That You Have," and an early version of "On the Esplanade." These songs show a performer low on confidence but high on charm; he makes lines like "Just because a canyon is fascist, doesn't mean you don't hold onto your beliefs" work, and his set up (acoustic guitar and vocals) is sparse enough that it makes any further unnecessary embellishments impossible. That is a Julian Plenti record I'd love to hear: Banks, his guitar, and his lyrics.

But if you have the ability, why not add a string section? Or a Hammond part? Fretless bass? Spoken word samples! Yes! Do it, throw it all in there! What Banks has done is drowned some songs with potential in a soup of synthesized sound and elitist affectations, creating a record that amounts to nothing more than embarrassing solipsism. Somehow, I'm not impressed.

Julian Plenti Is... Skyscraper is out now on Matador.