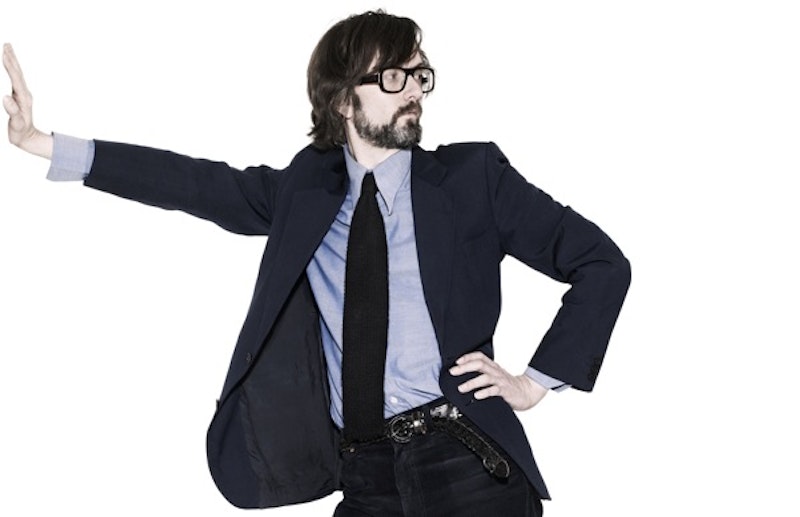 Both as leader of the great 90s band Pulp and on his phenomenal 2007 solo debut, Jarvis Cocker has proved himself an adept student of pop history, cultivating an image that marries the spastic nerdiness (and glasses) of Elvis Costello, the frontman swagger of Mick Jagger, and Morrissey’s cultural-critic and instigator verve. Musically, he’s continued the storied British songwriter school of literate character sketches pioneered by Ray Davies and Paul McCartney, he’s shown an unabashed and unironic love of disco, but has also spent a good deal of time crooning ballads a la Scott Walker or Leonard Cohen, at a time when that kind of singing couldn’t have been less in fashion.

So it makes a kind of weird sense that Cocker, whose last record abounded in classic pop references and warm, rich production, would do a near-180 for his new one, Further Complications, which was produced by notorious live-in-the-studio curmudgeon Steve Albini, features songs of mostly two or three chords each, and even has a guest appearance by saxophonist Steve Mackay, who added a final layer of monstrous insanity to The Stooges’ Fun House. In its way, then, Further Complications is as studied as any of Cocker’s many stylistic attempts, but it’s also incredible fun and never feels forced; his personality and songwriting skill remain as apparent and entertaining as ever.

Further Complications opens with four consecutive monster-riff songs, with Cocker singing in a higher register than he employed on his first, self-titled solo record. But just as that earlier album began with a sequence of nearly-cliched pop sentiments (“Don’t Let Him Waste Your Time,” “Black Magic,” “Heavy Weather”) before spreading out into weirder territories, Further Complications' first third is a bit of a canard. “Angela,” “Caucasian Blues,” “Fuckingsong” and the title track all concern unresolved sexual desperation and class insensitivity, not new territory for Cocker. The hoarse screams, Neanderthal riffs, and lyrics like “Let me tell you what it’s all about/ You find a good woman and fuck her ‘til her head falls off” are all a bit novel for this typically literate songwriter, yet Cocker imbues them with the same sense of humor and drama that animated similar Pulp songs like “Underwear” and “This is Hardcore.”

But from that point forward, save for a quick, Mackay-assisted tune called “Homewrecker!” which indeed rocks hard enough to warrant the punctuation, Further Complications becomes a largely R&B record, as Cocker slows down the tempos without adding additional chords on singalongs like “I Never Said I Was Deep,” “Leftovers,” and “Hold Still.” These are beautiful, touching songs, not less so for being relatively simple and rather funny—“Leftovers” begins, “I met her at the Museum of Paleontology/ I had no bones about it,” but the bulk of the song consists of Cocker leading a swaying chorus who beg, “I wanna be your lover.”

In his work with Pulp, and on Jarvis, Cocker never shied away from grand societal statements, yet Further Complications finds him looking more exclusively inward. The same preoccupations remain—sexual misdeeds, societal outcasts, a general mistrust of strangers—but, befitting the relative musical simplicity, the trend here is towards simpler statements of intimate intention. “Slush” is as close as Cocker has come to sounding like the Velvet Underground, riding a two-chord pattern on a wave of feedback and lyrics that liken personal devotion to natural destruction. It would have been a beautiful, expansive album closer, but then Cocker and his band pull out a nine-minute Bowie-esque plastic soul number called “You’re In My Eyes” that’s perhaps a more fitting end to this relatively less dramatic collection; it’s long, but simple, more in keeping with the album’s general tone than the romantic squall of “Slush.”

Context is everything, naturally. An album with Further Complications’ structure and sound would typically be an early move for a band, not an artistic gesture made by a 45 year-old pop star whose former band was among the most famous and influential British groups of the last two decades. That Cocker has made such an album as his second solo record, after a lush debut like Jarvis, only adds to Further Complications’ pummeling sense of surprise. It appears that his solo career will be as varied and rewarding as Pulp’s string of classic albums.

Further Complications is out May 19 on Rough Trade.