It's All About Attitude

The consistently underappreciated ...And You Will Know Us by the Trail of Dead. 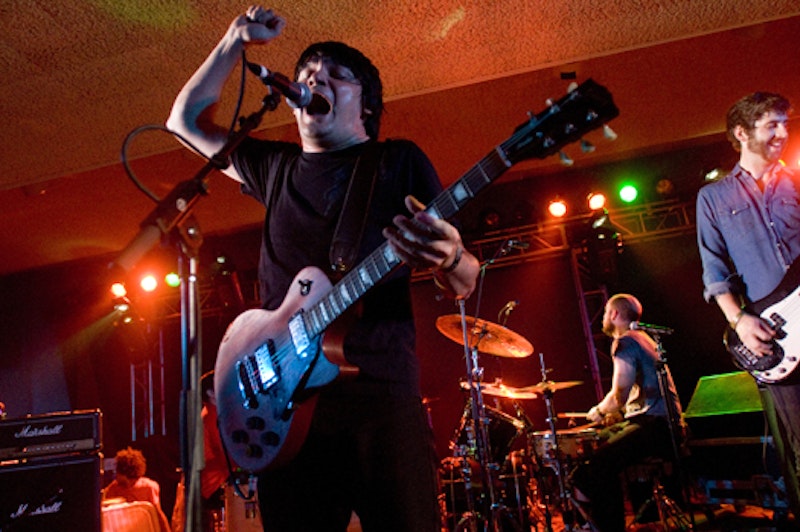 Trail of Dead don't get no respect. As I've noted previously, the Brooklyn/Austin-based hard rock band have been treated like independent music's orphan children ever since the press abandoned them after 2002's breakthrough Source Tags & Codes. 2005's Worlds Apart and 2006's So Divided are still derided, when Trail of Dead took their Yes-inspired prog qualities and went off the rails; although those are big, over-the-top almost orchestral rock records, they never feel fake, inauthentic, or insincere. Some critics may cringe at the sight of their gaudy cover-art and the arena rock ambition, but I'll stand by those records—they deserve a sound legacy. Trail of Dead is exceptional in indie rock today because they understand and harness something that is equally important to rock as the riffs: attitude.

This generation gap was aptly on display May 11 at Baltimore’s Ottobar, with a five band bill headlined by Trail of Dead and West Palm Beach's Surfer Blood, already deep into a joint American/European tour. I’d never heard of Surfer Blood before, and after their hour-long set, I got a pretty comprehensive dose of what they can do. I was ready to get behind them after initially admiring frontman John Paul Pitts’ unapologetic asshole posturing: while the rest of the band stared at their shoes, Pitts spun like an elf and stood on peoples’ shoulders for half-baked solos. I love a caustic frontman, but Pitts’ blatant brat rocker act wore very tired after it became obvious that his band only knows how to write one song: four chord beach pop rock. When Pitts threw his microphone into the crowd, it wasn’t exciting or dangerous—it just felt stupid and forced. Write some unique songs to earn that kind of obnoxiousness.

Trail of Dead blew them out of the water. Walking onstage to the Worlds Apart overture “Ode to Isis,” the band ripped right into a four-song suite from their latest release, Tao of the Dead. Despite the fact that Conrad Keely and Jason Reece are the only remaining original members, current bassist Autry Fulbright II and drummer/guitarist Jamie Miller contributed just as much to Trail of Dead’s mammoth stage presence. They played brilliantly and confidently, doling out indispensible oldies like “Caterwaul,” “Will You Smile Again?” “It Was There That I Saw You,” and “A Perfect Teenhood.” Even for the obligatory encore of “Richter Scale Madness,” Keely or Reece didn’t appear bored or jaded with songs they wrote almost 15 ago. Quite the opposite: Keely jumped, lunged, and moved in perfect syncopation with the classic rock epics his band forged so long ago. Trail of Dead’s guitar hero moves are appropriate and deserved for a band that’s slogged it out for years in club tour after club tour, never getting the attention and recognition they deserve. Their music, unlike Surfer Blood's, still boasts serious heft and attack.

Trail of Dead will likely remain the red-headed stepchild of indie rock, and the long shadow of Source Tags & Codes only seems to grow with time. Maybe their best studio work is behind them, but Trail of Dead remains one of the most vital and exciting live rock bands on the circuit. Keely’s nasal snarl and double-necked guitars may disgust the cool hunters, but at least he wears his influences on his sleeve, and proudly. When the hipsters start ripping off Yes instead of Animal Collective, perhaps Keely will receive his rightful place in the rock pantheon.