And You Will Know Us By Our Fall From Indie Acclaim

Trail of Dead's World's Apart and So Divided deserve another listen. 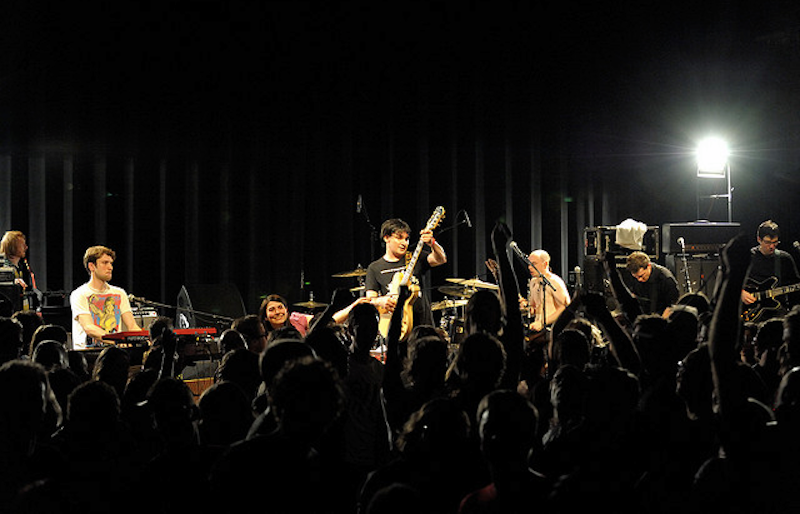 Did ...And You Will Know Us By the Trail of Dead deserve the last six lousy years they've had? Cursed by the ejaculatory praise doused on their major label debut, 2002's Source Tags & Codes, Trail of Dead have mostly languished in obscurity after their two follow-ups, 2005's Worlds Apart and 2006's So Divided, went nowhere and eventually got them kicked off of Interscope. Those records were panned for being too grandiose, cartoonish, all bluff and bluster—sounds suspiciously like Arcade Fire to me! Anyway, the band lost what good will they had in the press after Source Tags and their fan base shrank and shrank. 2009's self-released The Century of Self was received more favorably, but Trail of Dead is still stuck playing the same clubs to three-quarters capacity audiences year after year when they should be playing stadiums.

I never quite understood why Worlds Apart and So Divided were so reviled. Undoubtedly most of the haters were simply parroting what Pitchfork said (Nick Sylvester's review single-handedly set the tone for discourse on the band to the present day), but so many people wouldn't trash a record for nothing. Worlds Apart and So Divided are overwrought, maudlin, and theatrical, but that's sort of the point. And that alone couldn't have brought them down: The Decemberists have carved a lucrative niche for themselves as the typical bookworm ninny's nerdy wet dream. But whereas The Decemberists are perhaps the most emasculated band around today, Trail of Dead shoots for Genghis Khan rather than Emily Dickinson. Their album artwork is overloaded with Bosch-like scenes of grand battle and death of antiquity. Trail of Dead are a medieval band, exuding a sweet, aromatic romantic side underlined with a streak of brutal pre-modern fatalism.

Listening to songs like "The Rest Will Follow" and "Will You Smile Again?" I get images of botched decapitations, elaborate baroque halls with blood on the carpet, and gigantic Mongol armies slaughtering thousands of innocent people. Trail of Dead is exactly what a rock band should be: loud, shambling, cocky, and volatile. And yeah, singer/songwriter Conrad Keely's voice kind of sucks technically, but man does he blow it away on songs like "A Classic Arts Showcase," "Worlds Apart," and "Let It Dive." He didn't grow up in a Vienna Boys Choir, but it works, it makes sense—it's crackly, whiny, and loud.

The band’s name is doing them no favors, and what about the artwork? It's not hard to imagine a reasonable person mistaking Keely's elaborately ornate and grotesque historical paintings with a booklet from EverQuest, or Guild Wars. The artwork for So Divided is filled with so much poorly rendered fantasy CGI (gigantic elf-dragon-women, boar armies, mermaids smoking opium) that it feels like a bad joke. But they make no excuses. Trail of Dead are what they are and they've stood by it even through declining popularity, unlike the countless groups who change on a whim to catch the buzz and fail anyway. Perhaps Trail of Dead’s confidence and skepticism made the band a pariah, but I have no doubt the stature of Worlds Apart and So Divided will grow with age, and eventually they'll widely be seen as the great, bombastic rock records they are.