The capital-F Folkie talks about his first steps on the road, the greatness of Johnny Cash, and bringing his music to the people. 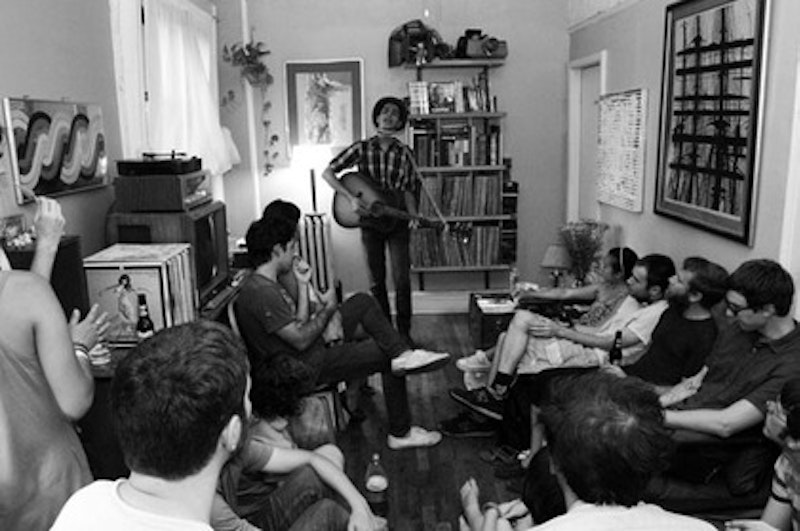 In "Down by the River," the second track off Vikesh Kapoor's debut EP On the Tail of a White Donkey, Kapoor borrows the refrain "Fare thee well, my honey, fare thee well" from the traditional "Dink's Song," first recorded by John and Alan Lomax and best known by recordings from Pete Seeger and Bob Dylan. Both of these artists are obviously huge influences for Kapoor, who plays traditionalist story-song folk, with acoustic guitar and harmonica, occasionally backed by soft banjo or fiddle. "Willy Robbins," personalizes and politicizes a newspaper story about a poor day laborer, "the hardest workin' fellow in town," much as Dylan did in early songs like "The Lonesome Death of Hattie Carroll," and shows Kapoor to be a wonderfully talented songwriter. "One Woman Man," with its beautiful fiddle lines, adds hope that Kapoor's music will become a much richer project. I expect many good things from him in the coming year. I talked with Kapoor after he finished some recent recording in the Catskills.

SPLICE TODAY: Can you talk about some of your earliest influences? What kind of music did you have playing in your house when you were growing up?

VIKESH KAPOOR: Earliest influence was the train that whistled at the bottom of the hill I grew up on. Hearing that every evening I always wondered where it was going to. I was struck by that. Here I was stuck in a small town, feeling like there was no way out, but days of train hopping seemed only in the books. Then I picked up a Johnny Cash LP for 25 cents at a church swap and He took me out of my town—onto the roads and rivers, drinking, fighting, wandering. The rhythm of Johnny and the Tennessee Two made me feel like I was going forward, away from the small town that I'd outgrown.

ST: Tell us about writing the songs for your debut EP. What's the inspiration behind “Willy Robbins,” for example? What was the recording process like for the EP?

VK: All the songs written for On the Tail of a White Donkey were written over the course of 7 months. I wrote "Down by the River" while stranded in a snow storm in Pennsylvania down near the big Susquehanna which cuts right through town. That song came quick. I was listening to Pete Seeger singing ballads a lot at that time. "Down by the River" is inspired from a song he sang—“Dink's Song”—but I rewrote the words. I had never heard Bob Dylan's version, which some people asked me about.

"Willy Robbins" came out of a newspaper story about a construction worker and that song is just one part of the story—the domestic life of Willy and his wife, Margaret. There'll be more songs to complete the story—but his song is anyone's song, not just about Willy.

ST: You've been touring a good bit lately. Do you do covers to fill out the set?

VK: Most of the songs I perform live are songs I've written, I used to play more traditional songs and sometimes will play one to get people singing together, which is never a bad feeling. Hearing everyone singing "Goin' Down That Road Feelin' Bad" together, stomping and clapping, is really fun. With the advent of things like the iPod, music has lost an inherent sense of community. No one’s singing together, and if I were to play folk music and lose sight of the "folk," the people, then what am I doing? Playing it because it's cool? You don't play folk music 'cause it's cool. Too often I see performers on stage who keep their eyes closed all the time, hardly acknowledging an audience. I understand every performer has their own needs when performing, but what ever happened to engaging or just entertaining? A show is a show, not just a time for an audience to stare only at you and make you feel special for being up there. You have to give them a reason for being there too.

VK: I've just been playing for a bit over a year now, so many towns I'm just starting to visit, having played there once or twice. At this point, having a preference for one kind of venue over the next would be premature. I play for anyone that listens—townies, families, folkies, hicks, students, hippies, children, workers, doctors, lawyers, hobos. Ideally, this is what you want when you sing folk music.

Playing a house show is fun and maybe more comfortable for everyone in general, but it seems anticipation of both the audience and performer is generally higher at a show at a venue with a stage and lights and ticket sales—those kinds of things.

I'm just starting to play shows with lights in my face. It's hard not being able to see an audience, but I can't say I dislike being on a stage singing my songs. It's exciting to sing through a good sound system- just different than sitting on a trunk in someone's living room or on a stool in a kitchen singing to them.

The first show I played was an apartment show with folk-punk dude Paul Baribeau. A lot of people were there and I played a lot of traditional songs and one early song I wrote, which I have now since forgotten. The apartment complex itself was converted from an old church. You walked in the entrance into the building and it was entirely open, circular inside, with apartments lining the circle and stairs leading upwards to the apartments. Everything was white. The apartment had some stained glass windows from portions of the church. It was an odd place, never played a place like that since, but memorable.

ST: Who are some of the other musicians you've been lucky enough to play with?

VK: I've played with my good friend Nicholas Beaven, who's a great folk singer. We did our first tour together and that was a good experience. I've also played with AA Bondy, Little Teeth, Pretty & Nice, and the folk/blues guys down in New York: Feral Foster, Willy Gantrim and the other Roots and Ruckus singers.

ST: What are you listening to lately? Are you an old record collector? I get the impression you would be.

VK: I just picked up the 1951 Hank Williams radio sessions, which has just been released. The recordings are much higher quality than his records and on the radio sessions he plays many songs, which I'd never heard before. I particurlarly like his reading of "Thy Burden is Greater Than Mine." What an honest singer, Mr. Hank! That’s a CD collection, though.

I like listening to records—old Folkways recordings and the Library of Congress stuff, which I can find cheap from time to time. My next release will be on vinyl and digital only—CDs have become tedious. But vinyl will always sound good and remain real. You could roll a piece of paper up into a cone, stick a pin needle on the end, and slide the cone across that sucker and still get the record to sing to you!

ST: What are your plans now?

VK: Currently I'm in the Catskills working out some recordings and I have some tour dates in late January and early February through the Northeast. There should be a release out by the Spring, hopefully on a record label this time around.