Once a member of the now-disbanded Wzt Hearts, Baltimore-based musician Jason Urick has been keeping himself busy of late with EPs, seven-inches, 12-inches, tapes and an upcoming tour of Europe—with plans for an LP and a West Coast tour, too. 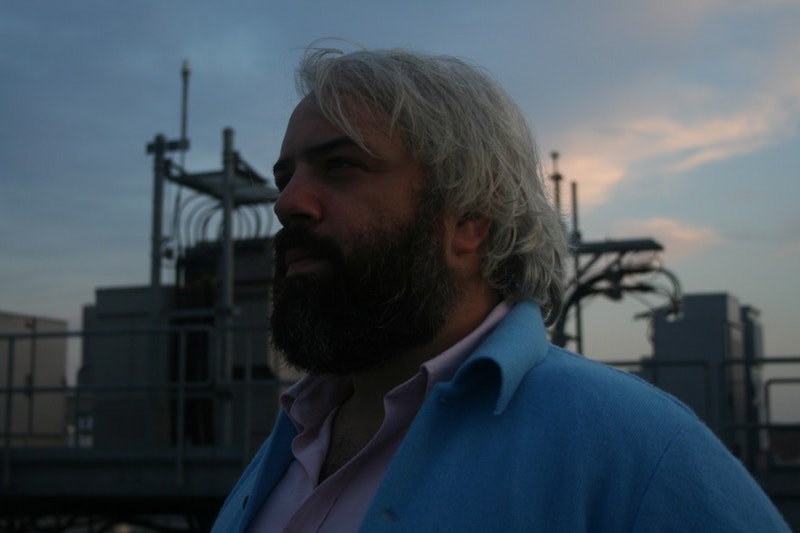 During their four-year run, Baltimore experimental noisemakers Wzt Hearts put out two beautifully crafted albums, 2006's Heat Chief and 2007's Threads Rope Spell Making Your Bones. Their songs were drifting, ambient blowouts of tape loops and samples and clanging drums. After they disbanded in late 2008, Wzt Hearts member Jason Urick decided to finally finish up the solo album he'd started working on a couple years before. That album, Husbands, is out now on Thrill Jockey. I caught up with Urick yesterday via email.

SPLICE TODAY: You're about to set off for a few weeks through Europe with Ecstatic Sunshine. Will this be your first European tour? Did you set up the dates and invite Ecstatic Sunshine along or was that all handled by Thrill Jockey?

JASON URICK: This is indeed my first tour out there. I've been to Europe a few times, but this will be my first time playing shows there. Matt (Ecstatic Sunshine) and I were both supposed to release our albums in October of last year and were both independently thinking of trying to get over to the EU for shows… so when we learned of each others' plans it seemed natural to do it together.  I sent audio for both our records to a guy named Nikita from Paper and Iron Booking whom I had met last May when I was staying in Berlin who does booking in the EU and he agreed to take us on. He's done all the hard work so far.

ST: Can you tell us about recording your new album, Husbands? What did you sample, what kind of equipment did you use, who helped out?

JU: Ideas and sketches for songs that ended up on Husbands started as far back as 2005. When I was with Wzt Hearts, I would often play around with a sample set or sound grouping that didn't seem like it would fit in with what we were doing at the time, so I started a folder of things I created that I dug but never fleshed out back then. I was always dropping little things in there, some more realized than others, throughout the duration of my time with the band.

In 2008 I took a break from the band and in that time I went back to these sounds and started forming what would become Husbands. I wasn’t sure if it was something that would come out on a label or if I would just send it to friends and that would be that. Luckily Thrill Jockey liked what they heard and now it's a real person!

As far as equipment, it's always pretty much been just computer, though two of the songs on the record are based almost entirely off samples of my girlfriend Emma playing a harmonica. There is also a CD only track that has some snatches of guitar playing by me, but the rest is ether soft synths or samples.

ST: Do you think the music you're making now differs much from the music you were making with Wzt Hearts? Is the process fundamentally different?

JU: The process is essentially the same. The main difference is that with Wzt Hearts I was one of three or four, depending, and I had to leave space for other people sonically and allow for the flexibility to change on the fly as we were an improvised entity. With the solo stuff my working methods stay the same but I am free to make things as dense and glacial as I like.

ST: Whom have you been listening to lately? Who in Baltimore has been inspiring you?

JU: My listening habits are pretty erratic so it’s hard to say. I always listen to a lot of African and reggae stuff. For the last seven or eight years that stuff has been the most prominent of my listening habits, but really I usually just have my iTunes on random and every now and again something will catch my ear at the right time and I'll obsess over it a bit.

Some recent things I can think of that have caught my ear: The new Animal Collective EP, Matrix Metals cassette, Washed Out is pretty rad I think, Ducktails, the newest Vladislav Delay is amazing, 2562, Untold and a lot of dubstep stuff too. I dunno, I could go on forever.

Locally there is always a ton to be inspired by: Asa and Dan from Lungfish continue to inspire even outside of the monument that was that band. I think the new Beach House record is gorgeous. Ecstatic Sunshine's newest record is one of the best things out in the last year, period. Anything Jenny Graf does is always worth a listen. Then there's Teeth Mountain. And Dan Deacon's ensemble was very inspiring to see live. Again, I could fill another book just with local stuff. I also want to give a shout out to a lot of the younger electronic artists starting to spring up in Baltimore: Eachothers, Semya, Run DMT, Do While, and a slew of other stuff is popping up lately, so I've been trying to keep a keener eye out for new stuff on Lost Ghost, Wigflip, and in those general circles.

ST: I know it's a tough question but what do you look for in a song—both as a listener and as a musician who experiments with sampling? Are they connected? Is a lot of the music that you've been listening to for years the same stuff you use in your own songs?

JU: That is a tough question. I would say that one theme that always seems to grab me is artists that can straddle experimental techniques and sounds with pop sensibility, from rock to electronic to whatever, I always enjoy stuff that keeps a toe in both pools. Bands like U.S. Maple and Storm And Stress both pop to mind on the rock side and people like Steve Reich, Terry Riley, and a lot of the early minimalists had a great knack for writing killer pop hooks in their stuff. Electronic-wise I think Oval, Lithops, Pita's "Get Out #3" and early Fennesz really typify this perfectly as well.

As far as what I choose to sample when I do work with samples it's really just trial and error. The one song on Husbands that has samples is "Let There Be Love," which is based off the Bee Gees song of the same name, which I do love, but in general I'll just occasionally hear something when listening to music and make a note to go chop it up and see what can be done with it. More times than not though it ends up going nowhere.

ST: What's next? Any plans after this European tour?

JU: Release-wise Husbands is coming out on CD in the US in February and following that I have a split cassette on Lost Ghost with Eachothers, a 7" on Fan Death and a new 12" on Thrill Jockey called "Fussing & Fighting," due in late Winter/early Spring. After that I'm gonna take a bit of a break and start seriously getting down to business on the next LP. I may try to pop out to the West Coast too for some shows since I still have never been out that way.

Who knows though? Life has a funny way of taking you places you don't expect, which is great.