Splice talks with one of Charm City's best and brightest musicians. 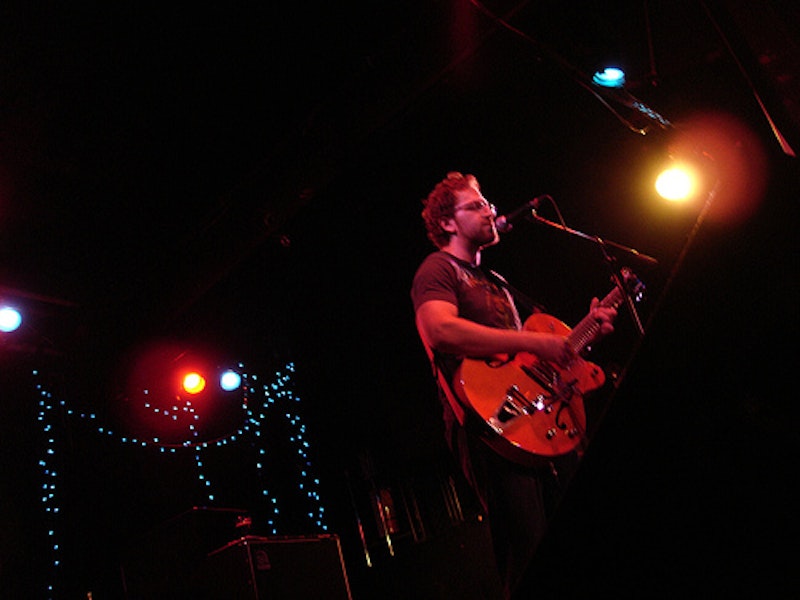 I'll just lay it all out up-front: Kadman is no doubt the best band around Baltimore you've never heard. A slowcore project fronted by David Manchester, Kadman sounds, well, like no one else who calls Charm City home—setting themselves far apart from the art rock weirdness of Wham City that tend to dominate these days. These Old Bones, Kadman's second album, out now on the Baltimore's fantastic Beechfields label, is as good an album as any you'll hear this year: alternately noisy alt-rock and dark indie folk (think: Bonnie 'Prince' Billy and Matt Sweeney's Superwolf), all dominated by Manchester's superbly haunting vocals. Manchester and I exchanged some emails the other day, and here's what we came up with:

SPLICE TODAY: Can you tell us how Kadman got started? Originally it was a solo project, right?

DAVID MANCHESTER: Yes. Kadman did start as a solo project. I guess I started playing this particular style of music towards the end of college. I had been in a few bands before this, but Kadman was my first venture into writing and performing my own songs. I had a lot of life changing events going on at that time, and Kadman became a creative and emotional outlet for all of that. It was almost like an audio diary. After playing solo for a few years, I mentioned to my wife that I really wanted to be able to take the music to the next level, but didn't really know how. I had been doing the acoustic singer/songwriter thing at coffee shops and open mics and was getting burned out. I wanted to do more, play clubs, live the rock-star life, to a degree. So, my wife and my brother worked together and organized both of the families to get together and buy me my first (good) electric guitar, the Gretsch I use now. It was amazing. In my head I thought, "well … no excuses, now." That's wh en I put together the first version of the full band, with Matt Smith on drums and my brother Mitch on bass.

ST: I know you've changed the line-up a few times, how long has the current configuration of Kadman been around?

DM: The current configuration came together in two stages. James joined the band in September of '08, and Frank joined in, when was that … February of '09. So, it's still a relatively young group.

ST: Has the songwriting process changed much since you got started? How do you approach it these days?

DM: It has and it hasn't. I am not the kind of musician that can just sit down and write a song. A lot of times, songs come to me from my just fiddling around on the guitar in front of TV or while sitting in the backyard. I'll figure out a progression or two and then just build on it. Lyrically, this may sound odd, but a lot of times the song dictates the subject matter. Once I get the chord progressions and changes down, I'll ad lib. Sometimes it works, sometimes it is absolutely horrible what comes out of my mouth. Recently, though, I've been trying to put more thoughts into the lyrics and the subject matter of the songs. I've been trying to move from having all of the songs be about internal issues to looking at the outside world. Politics, current events, things that are more global, though I like to think that even the songs about personal issues and events can have a universal appeal, or can at least be interpreted to fit into the listener's own experiences.

ST: Can you tell us about this latest album, These Old Bones? How'd it come together?

DM: Wow … good question. I'd like to say organically, but that just sounds so trite. The songs on the album came in bits and spurts throughout the year after Sing To Me Slower was released. A couple of the songs like, "Portraits," "Lullaby," and "An Army Rises" were songs that were put together with the old lineup of the band. The other songs on the album pretty much trace my life over the next year. Once the bulk of the songs were put together, we contacted Mat and Mobtown Studios to start the recording process, which, took a little over 4 months. We really took our time with this album. We used three or four different snare drums, 5 different guitar amps, three different guitars, stand up bass, electric bass, a vast array of pedals. Some songs we had 7 tracks of guitar feedback alone. We really wanted to figure out what worked best for each song to really help it come to life. It was great that the whole band was so invested, as well as Mat at the studio.

I'm really proud of these songs.

ST: Who would you consider to be your biggest influences?

DM: Hmm … that could be a very long list. I try to listen to so many different bands and genres it's hard to figure out what the direct influences are. When I first started playing guitar I was really influenced by old blues musicians like Lightning Hopkins, Hounddog Taylor, John Lee Hooker. Take that and combine it with Alan Sparhawk from Low and Retribution Gospel Choir, Mark Kozelek from Sun Kil Moon and Red House Painters, My Bloody Valentine and Sonic Youth and I guess that gives you the music of Kadman.

ST: You seem pretty at odds with a lot of the music that's being made in Baltimore these days. Is there any part of the local scene, any bands, that you're really drawn to?

DM: Haha.. yeah. We seem to stick out a bit which is good, and bad. It's hard to classify us into a genre and it's hard to find bands we're similar enough with to put a good bill together. Of other local bands though, I'd have to say I absolutely love The Water. Amazing music, awesome guys. Monarch, er … I mean Wye Oak is another one. They give us little folks hope, too.

DM: Right now we're spending a lot of time trying to get the word out on the album, and we're working with some other bands, locally and regionally, to get a few mini-tours together in the summer and fall. We did a mini-tour of the mid-west a few months ago and it was a blast. I am really hoping to take the band from a local to a more regional, or even national arena. Then, just keep working on new songs and see where the music takes us.

Visit Kadman's at MySpace, and check out a Mobtown Studios Microshow.