Don't Tread On Me

High on Fire's Snakes for the Divine is music by which to run on your treadmill or invade a sovereign nation. 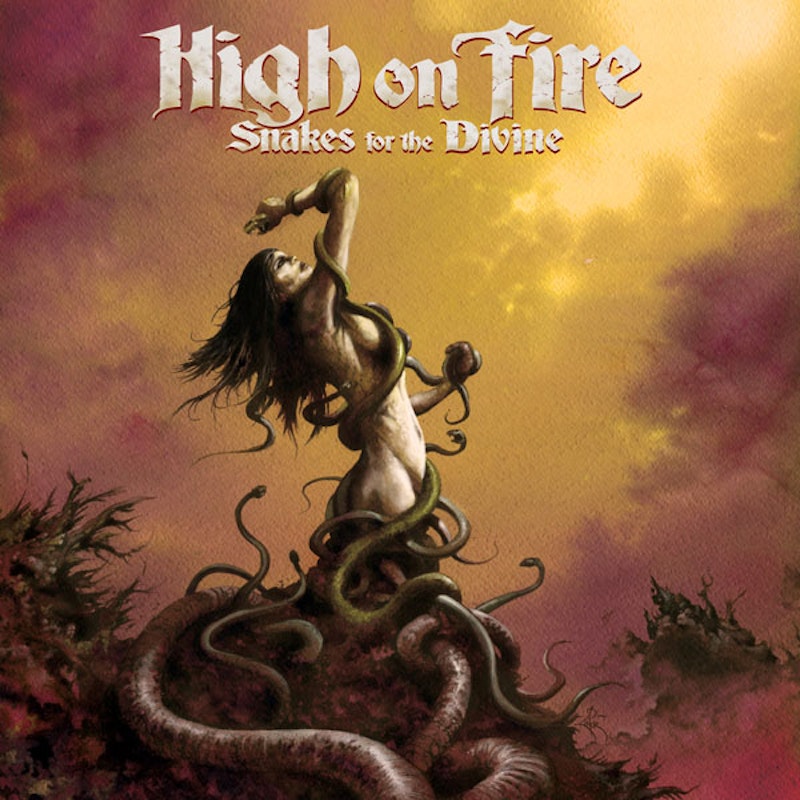 Metal has always been an uneasy critical sell.  Too uptight to be rootsy, too formulaic to be arty, too earnest to be clever, and too
remorselessly sexless to be sexy, metal has droned, trudged, and howled its own way between rockists and poptimists, occasionally hailed by one or the other, but never exactly embraced by either.

So it makes perfect sense that High on Fire is the critically validated metal It band of the moment—since, in most ways that
matter, the group isn’t really a metal outfit at all. Oh, sure, High on Fire has many metal trappings. The songs are long, loud, and prog-inflected. The vocalist growls as much as sings. There are guitar solos.

But despite all that,  High on Fire’s energy is not metal. It’s punk. More specifically, it’s metal-tinged pop punk, in the vein of Guns N’Roses or Nirvana or all those grunge bands that critics loved because beneath the thin metal veneer they were actually trying to be rootsy, or arty, or clever, or sexy, or some combination thereof.

You can hear High on Fire’s actual sympathies in the opening title tune, with the repetitive, fist-shaking chorus (“Rise up! Fall
down!”) that gets lodged in your brainstem like an overcarbonated bleacher cheer. You can hear it in the emotive sincerity with which Matt Pike emotes like a cross between Eddie Vedder and a constipated pachyderm on “Bastard Samurai.” And you can read it in that damn name: High on Fire. That’s an inspirational slogan for your mildly edgy corporate event, damn it—it’s not a metal band.

Metal is about being ground into anonymity beneath a giant iron heel. Punk’s about raging against the machine. The latter is in general the option more likely to wow a cultural arbiter, since people, or at least critics, like to feel that they’re fighting the power rather than being devoured by it. And, you know, if you’re creative, smart, and funny—like the Dead Kennedys, or Motorhead, or even Nirvana—fighting the power can be really entertaining and worthwhile. High on Fire, though, has neither the wit of great punk nor the remorselessness of great metal.  Instead it’s just lumberingly literal adrenal rush; music by which to run on your treadmill or invade a sovereign nation, or shout “Shit yeah!” while drinking yourself into a stupor.

Which is fine, I guess.  But I wish they wouldn’t call it metal.