In Search of Musik

Looking for foreign imports can be awesome if you're in Europe. But looking for soul and reggae in Berlin? Well, that's just stupid. 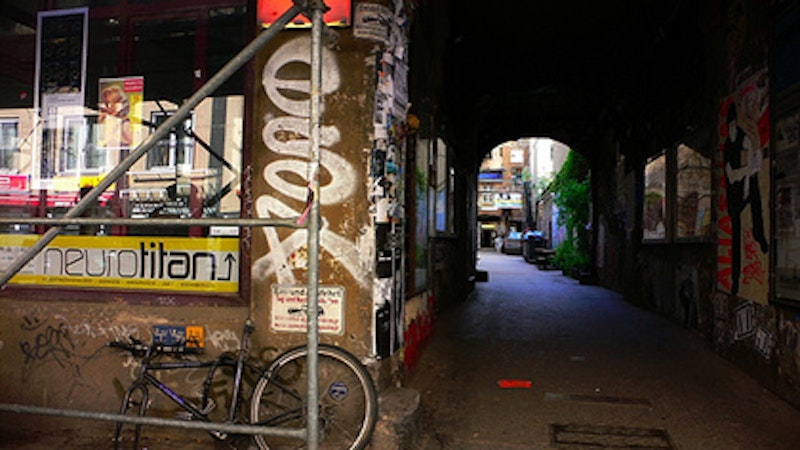 There is a dubious excerpt in the back of my Lonely Planet guide to Berlin. Tom Parkinson (most likely a youngster from Harvard or some other Ivy League school that Lonely Planet scours for hip-to-it contributions) proudly boasts that he went to 17 clubs in one evening. Essentially the biggest research-based pub crawl ever. If this doesn't scream out "house of cards" than I don't know what does. But, to be fair, this book is not a guide for extended living in the German capital. It's a gloss over; a sketch of what's at your fingertips, full of one-visit knowledge. And after an excellent wiener schnitzel and supreme time at the Prater beer garden, I realized I had to tip my hat to Mr. Parkinson. Instead of writing a travelogue about my exploits in Berlin, of which Splice already has one correspondent, I decided to put the city up to a challenge. With the recommendations of Lonely Planet in hand, I chose to hop from one Bezirk record store to another in search of a specific set of albums. And what I found was not what I expected.

Here is the list of music that I was in search of:

Sam Cooke: Tribute to the Lady. An extremely hard to find collection of Billie Holiday covers from mister soul

Schwarze Schafe O.S.T. "Black Sheep" is a German film that came out last year with a soundtrack by the always-awesome King Khan

Studio One Soul. Like all of Studio One's releases, this is a banging compilation. And after grooving to Jerry Jones' "Still Water" at the club just a week ago, I knew I had to get my hands on it.

My first stop was at a dusty looking set up on the corner of Friedrichstrasse and Ziegelstrasse in Mitte. The place was virtually uninhabited yet three people were working the counter. After turning a corner I noticed that the shop was much bigger than expected. Small stairs and a narrow hallway vented out to a much bigger room with shelves filled with unsorted cassettes and an enormous classical section. When I got to the soul/reggae shelf, it paled in comparison to the Bach offerings alone. There was plenty of James Brown, but Sam Cooke was nowhere to be seen. While the individual reggae selections weren't helpful, the store did carry several Studio One and Trojan box sets. Despite finding Studio One Soul 2, the original was not in my presence and I headed off to the next destination.

Further down Friedrichstrasse, the neighborhood becomes more affluent and the shops gaudier. Galleries Lafayette and new shopping malls with their large glass windows contrast greatly with the fascistic architecture of yesteryear East Berlin. One of the bigger stores on this street is Dussmann. Known as a KulturKaukhaus, Dussmann is a commercial, music monopoly. With an immense selection in front of me, I felt very good about my chances of finding the three albums. I headed straight to the soul section, which took over an entire side room. Names like Betty Wright, Solomon Burke and Marvin Gaye were highlighted with bountiful offerings. Funk/soul compilations lined up the wall to further bolster my hopes. But shockingly, for some unknown reason, there was not a single Sam Cooke album. No Harlem Square Club, no Live at the Copa, and certainly no Tribute to the Lady. Reggae was apparently the one section that Dussmann didn't regard too highly. So after two duds I walked over to the Filmmusik shelf and easily found Schwarze Schafe.

There are two other record stores that Lonely Planet recommends and they happen to be right next to each other. But before visiting them, I explored a couple storefronts that I passed by while traipsing around the city. One store that was just a few steps away from Prater in the hip Prenzlauerberg district stood out with some bouncy house music blaring out the front door. Inside there were seven tables at the customer's disposal and a mix of electronic and trance. Another shop called Doctor Beat was literally connected to the owner's apartment. His kitchen was at full view from every corner of the room.

Scratch Records and Space Hall are side-by-side in Kreuzberg and just around the corner from some fine currywurst served at Curry 36. Scratch is more inclined to electronic music but you couldn't tell from the Bon Iver softly filling out the room when I entered. There was more soul than I expected, but it still a techno hut. So no deal. Space Hall looks the most like any newish record store in the States. There are posters everywhere, plenty of albums appropriately tagged, and a surface littered with flyers signifying that people actually shop there. It looked like they had every single Studio One and Trojan release available. I saw a couple compilations I already own, like When Rhythm Was King and Let's Do It Rocksteady, but just like the store in Mitte, they carried only the second volume of Studio One Soul.

So that sealed off my record seeking exploits. I was one for three, with the lone found album being a German soundtrack. I never expected to make a day out of record store hopping, but when it's tucked alongside drinking, eating, and riding a bike...well it's a fun day then. And anyway I've got Berghain to look forward to on Friday.