Hermanubis Was A Big Influence 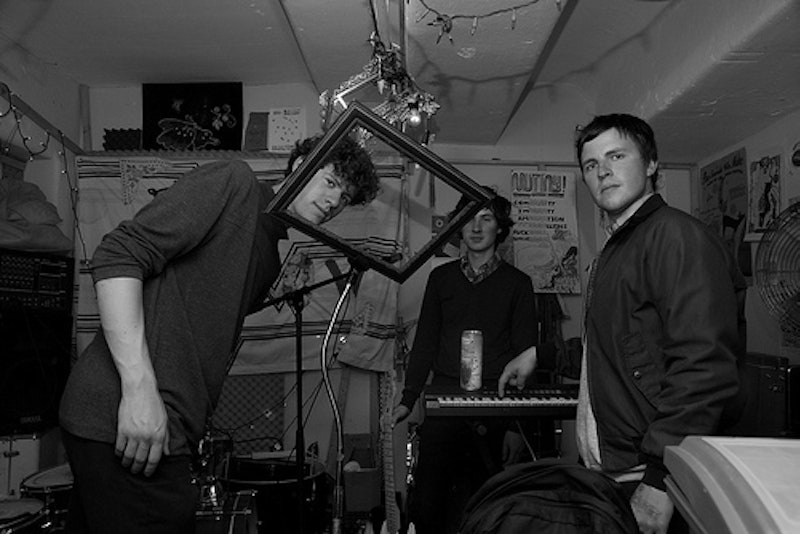 Listening to a Ranx/Xerox song is a lot like actually interviewing the band. It can be exceedingly difficult to distinguish between straight truth, blatant disinformation, barbed intellectual insults, and jocular good cheer, and one emerges from both experiences uncertain and a little dazed. Everything’s garbled and slightly malicious, and you’re not entirely sure what happened. The forte of singer/guitarist David West, drummer John Shade, and singer/bassist Kevin McCarthy is atonal, trammeling punk rock in post-punk clothing that’s both serious and maddeningly unserious, with the intellectual/confrontational mentality endemic to well-read, no-bullshit punks everywhere. Their excellent-if-disdainful self-titled album, which was released by Make A Mess Records in August, comes on like an eff-this-week panic attack; it doesn’t much like you, but you may like it.

SPLICE TODAY: I was Googling you guys one day and stumbled upon a song titled "Rank/Xerox" by this first-wave German punk group called Hans-A-Plast. Are you familiar with that song? My first thought was maybe that's where your band name comes from.

John Shade: Yes, that's where the idea came from. Kevin and I started playing music together when I moved back from New Zealand. At the time we thought it would be cool to have a band name to cover all the music projects that a core group of people played in. You know when you jam with someone and you write a couple of cool songs, but you know you'll never play more than two shows or record anything beyond a tape? It would have been like an umbrella for a bunch of art, music and performance. That wasn't too viable though.

Then Kevin and I were using that name while we were playing with our friend Travis; that project fizzled. When we met David and started the band, we strong-armed David into using the name. The band name doesn't have much to do with the song though. My friend German friend Liser translated the lyrics for me once; I think it's about a serial killer and the photocopies of the victim's portraits. I liked the way it sounds and looks; it has good-looking letters.

ST: How did the three of you meet?

David West: Kevin and John have deep history revolving around punk slum houses in Los Angeles, straight-edge decadence, youth hardcore sort of gear. When they lost the edge (chemically and socially), they moved up to San Francisco to become educated and ended up living together. I met John when I first moved to San Francisco from Perth; he organized a super cult gathering of some kind which only the Internet could provide details to, and I used the device to hack into his channels. We met in person at this event.

ST: What was the first song that the three of you wrote as a group, and how did it come together?

DW: The first song we ever wrote as a group we actually never played live or recorded as it was way too full-on. Basically what we have here are three composers and we work in movements, not traditional song forms; it was like grafting three additional heads onto Cerberus, there just wasn't room.

Shaved your head since you were sixteen

Growing it out, not as thick as it used to be

Drank your words from the bath of youth

Ate your firstborn, changed for the sane

Are you an electrician? Working with electricity?

Where is the door, so I can leave?

Cranial outpost, it's thin, it's thick

Cranial outpost, it's too thick to think

It's OK not to think as you sink

Just as long as your scalp is pink

Longhairs get out of the scene.'

The song came together quite quickly, as we stole the intro from “Street Fighting Man” by the Beatles and inserted it into the verse of “Nowhere Man” by the Rolling Stones. If this song were ever released, you would not be interviewing us right now.

ST: You could put it out—maybe just as a free download, or bill it as a mash-up or something. I don't think they'd sic lawyers on you.

DW: Well, I don't really want to end up like that guy from the Verve: mega-rich, well-dressed and boho-sexy, traveling the world first-class with Jason's Pierce's ex.

Between the Beatles' and the Stones' famed intensities of copyright vigilance, I dare say we would have to be more worried about hit men or trained mutant sharks rather than those run-of-the-mill pests called “lawyers.”

ST: So you're saying that you'd never want to be a guest vocalist on an LSD-themed Chemical Brothers single?

DW: If the Chemical Brothers wanted to “show me the money,” I would certainly emote on one of their techno masterpieces.

ST: You guys combine this dark, flailing post-punk sound with a sneering, punk anti-sloganeering attitude. Is there a particular place your perspective comes from, or that your songs represent a reaction to? On the self-titled debut, "Turn to Stone" especially leapt out at me, maybe as a refutation of existence.

DW: The perspective is two-fold, thanks to the brilliant effort of Maximum Rock’n’Roll and their commitment to the unearthing of many obscure bands, especially those from central and eastern Europe in the 1980s. Those bands are particularly appealing because they weren't concerned with adhering to the conventions or refining and limiting them to the point of insanity. These bands, nothing was sacred, some of the music sounds bad—especially bands from Yugoslavia who were quite fond of ska, it seems—but a lot of it sounds amazing and unlike anything else before or since.

Also, given the diverse and ever-changing political environs I think it's safe to say that for a lot of these people, punk was real, it was dangerous—we are talking people that were true outlaws and on the fringes of society. I'm not talking no "boys in blue" Youth Brigade, Brian Deneke candy-ass shit. I come from an extremely isolated, small and really fucked up town in Australia and I feel a great affinity with my 1980s European punk rock brothers and sisters. The only people I managed to achieve friendship with in Europe were Polish people, and one day I will get around to buying useless shit off eBay for them.

“Turn To Stone” deals more with a refutation of contemporary sexuality, harking back to the Greek modes of bodily worship, casting a harsh light on our more conservative modern sector. Hermanubis was a big influence.

ST: Was "Nausea" inspired by Sartre?

DW: I've never read Sartre, so the answer would have to be no, although I did skim through his introduction to Our Lady of the Flowers as it was major windbag shit. Personally, I feel like the French were mere sniveling lapdogs to the Germans when it comes to existential riffage.

ST: There's a really intense, visceral pulse to your songs, like how "Sterile Regions" has this siren-y runaway train charge then careens into a wreck of chords; "Cave Dweller" reminds me of Red Medicine era Fugazi. In a very real sense, you sound like the end of the world. Do you feel a peership with anything else that's happening in music today?

DW: Those are kind words. I really wish we could trigger some kind of apocalyptic event. That way I wouldn't have to worry about getting rid of the 10,000 copies of this LP that Eric at Make A Mess.com ordered. This is 2011, not 1811!

I certainly don't empathize with modern musicians but I can say that I both like, enjoy and feel sorry for acts such as Narnia, Dragonforce, Extended Summer Surgery, Ty Segall, Mundaring Weird and the artist responsible for the cover of the latest Negative Approach single. Being an artist in the post-Internet age certainly presents a myriad of casual chaps in this year's slacks.

DW: Fortunately we are at that point in our career that we can cast our workaday trappings off into the wind like so much flowers and ambrosia in a Dionysian soiree. Thanks to the generous royalty—sharing arrangements of Eric at Make A Mess.com I will never have to work again.

ST: What do you guys make of the Occupy Wall Street movement? There's something inspiring about it but there's a danger that maybe its like a party protest: unfocused, fractured in terms of message, a fad. On one hand this sort of thing has been a long time coming, but are Americans really capable of sustaining a mass protest effort over the long haul, of forcing actual significant change and making sure our grievances are really heard?

DW: I've read most of Igor Driznc's works, and I can firmly say I don't really give a rat’s arse about politics. However, I am very interested in the stock market and Twitter.