Foundation of a Single Hit

“I Got You Babe” and other songs justified by simple instrumental parts and hooks. 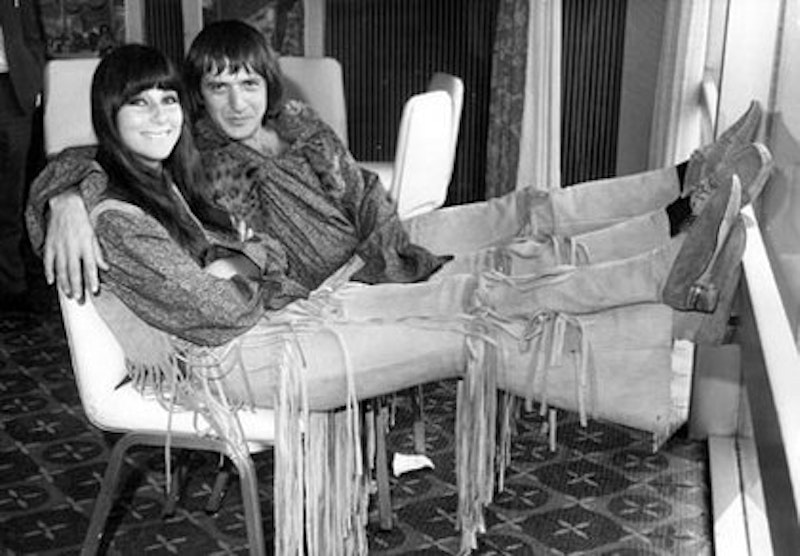 “I Got You Babe” is one of the most loathed pop songs in history, a lifeless cornball performed by two of the most uncharismatic performers of the 20th century. But the other day, I had a sudden, creeping urge to pull it up on YouTube, remembering something very specific about the chorus. The melody is beautiful and Sonny & Cher’s vocals are languid and blissed, but it’s the bugle-like organ hook, four repetitions of two notes in the left channel, “da-da, da-da, da-da, da-da, I got you babe.” That bugle hook justifies the song and the treacly, weightless verses. Yet whenever the chorus re-enters, gradually layered with lead guitar and more organ emphasizing the hook, the song is elevated and earns its bloated, drawn-out ending. I put “I Got You Babe” on again today and couldn’t even make it to the first chorus. The glitter was gone and out of tune. In a few days, it’ll sound like a masterpiece again.

The bugle, organ or mellotron is cutting and is textured like a piece of gold ribbon, mixed high and used sparingly, with emphasis. These bits are what make pop songs so durable, like the opening clarion call and main guitar riff in “Girls Just Wanna Have Fun,” the rock break in “99 Luftballons,” or the flanger on James Honeyman-Scott’s guitar in the chorus of the Pretenders’ classic “Precious.” Good melodies and one-size-fits-most lyrical conceits can only go so far. Often it’s these instrumental elements—always simple and immediate, either used sparingly or constantly—that communicate the full character of the song and its intent. Sonny & Cher are pop culture debris with careers that went way past 1965 and “I Got You Babe”—more hits, a split, Bono’s accidental death, further history and grief. The more we know about the person singing the song, and the more songs we see them sing and more interviews and promotional cycles they go through, the work is pulled closer and closer towards Earth where great pop does not belong. “I Got You Babe” stands alone as a pure moment in time from something called “Sonny & Cher,” singing about love, backed by emotive musicians and an artfully simple and effective arrangement.

I feel the same way about “Sing” by the Carpenters, or “Xanadu,” title song of the film of the same name. The melodies are pure and have a wistful, seen-it-all-and-I’ve-had-enough kind of peace expressed solely through their music. “How Bizarre” by OMC is another example of this swooning and analgesic sound: the just-slightly-sharp guitars that sound like singing birds. The sly lyrics and laconic delivery, along with the harmonized chorus, makes it one of the best pop songs ever. “Steal My Sunshine” by Len is in the same vein and was released around the same time, but the verses are delivered in a repulsive mix of blink-182 nasal over-enunciation and chain smoker, piqued only by the glorious hook of “if you steal my sunshine.” Even in such a drastic case, an awful male vocalist delivering the verses and half of the chorus, the sun-kissed hook justifies the song. Obviously, with one-hit wonder type songs (from established bands and actual one-hit wonders), you want something that captures a feeling consistently instead of isolated parts surrounded by gunk. But even then, it’s often worth the slog.