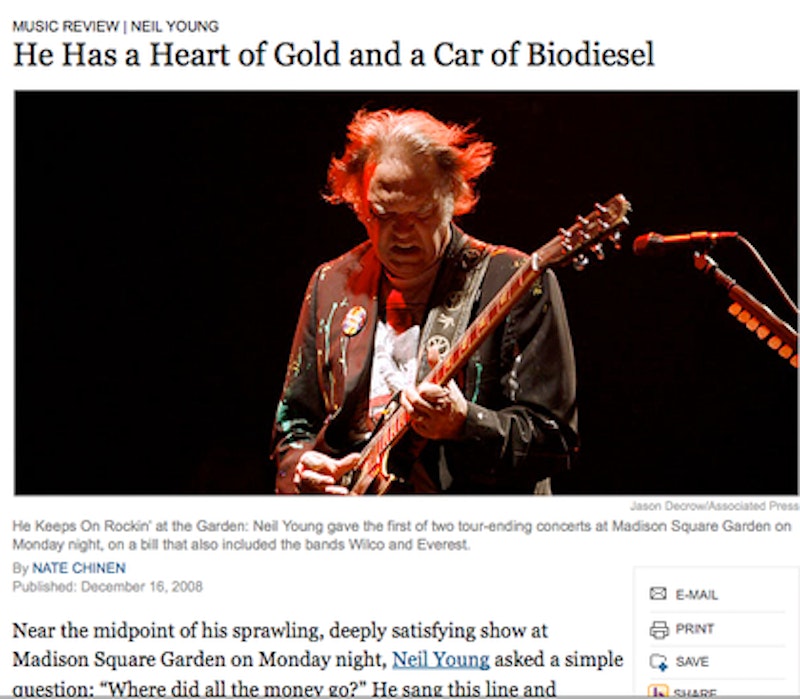 Let me just say this first: I love Neil Young.

On the Beach is a perfect album. Harvest is pretty damn close. "Unknown Legend" was the first song I ever learned on guitar.  I've listened to "Ambulance Blues" and "Tell Me Why" and "I'm the Ocean" more times than I can even tell you. But when I saw this photo of Neil in today's NY Times:

It reminded me of how incredibly unattractive Neil Young is—and not in a Mick Jagger, "I did so many drugs it looks like I've been dead for 12 years but they prop my emaciated corpse up on stage in a Weekend at Bernies-ish, gotta keep the money rolling in" kind of way. No, let's face it, Neil Young has always just been a pretty ugly dude. I don't think this is a point that has to be labored too hard: When he was younger he had this goofy-lookin' Neanderthalish quality to him – see, for example, the first 10 seconds of this CSNY with Tom Jones video from '69:

or this classic '70s photo:

(Not pictured: The family in his freezer.)

Now… well, he's just kind of terrifying. No, not Tom Waits terrifying. Also: Did anyone else see the NY Times photo and think of the Indiana Jones Nazi face-melting scene?

Anyone? Alright… just me then.