Disco isn’t dead, but you might be surprised where it’s still kicking. 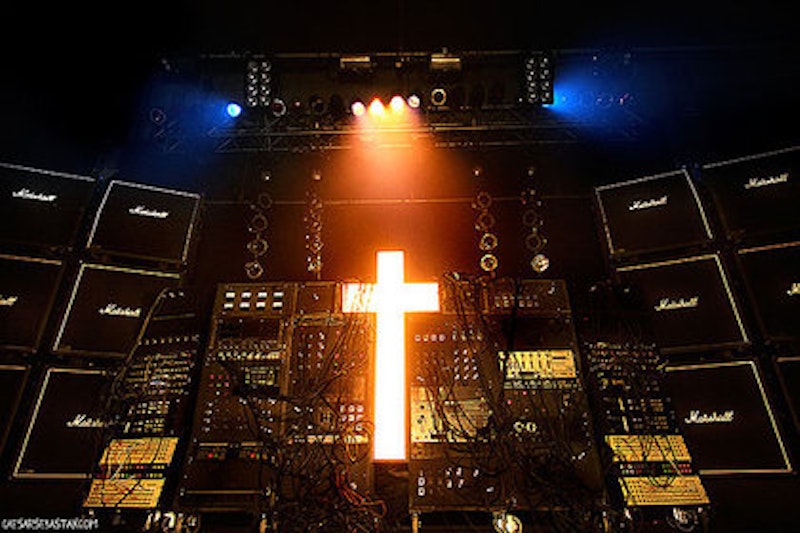 The kid couldn’t have been any older than 19—20, tops. His eyes seemed only loosely attached to the back of their sockets, rolling around willy-nilly. His arms and legs moved spastically, at times as though they were pushing through water, at times as if they were lightning-quick-Muhammad Ali jabs. He was dragged away through the front doors by the police, who made their way through the throng of kids that had gathered. He was trying to yell at the police, garbling out incoherent nothings. If he had any more control over his body, his resistance probably would have been more unsettling, as the current situation presented a public form of violence I wasn’t really expecting to see. This is how my New Year’s Eve started. This is what I saw before I was even inside the theatre.

I can’t say I was really prepared for the scene that unfolded. A couple months before, I had noticed that Justice, a Parisian house music duo and one of my favorite acts, would be performing a New Year’s Eve show in Chicago. My girlfriend and I decided to make the drive westward—around four hours—to check it out and ring in 2009.

Before Justice, I’d seen a few techno and house DJs before, the biggest name being Tiesto. The dress code at most of these events was pretty loose, though nice shoes, dressy jeans, and button-down shirts were the standard male attire; women were primarily in dresses or designer jeans with “going out” shirts. The audiences at these events were the types you imagine would be at a nightclub on a weekend to dance: a collection of well-dressed, made up, in-shape, dance-happy folks. These were the alpha dogs, the cool kids, the pretty people, the ones you want be like. They drank, probably did drugs, but neither were readily apparent. Everyone could stand and walk. There were few fights, if any. These were the city kids, mid-20s to mid-30s, working and living on their own.

Placing Tiesto and Justice in the same musical genre is a bit like calling a square a rectangle—it is, but that’s not quite the whole story. Tiesto plays a combination of techno and trance music, the whirring repetitive drum machines that keep your body moving at a steady pace, to be increased or decreased at the DJ’s discretion. Justice, meanwhile, makes house music, differentiated by its use of disco’s “four-on-the-floor” thumping, syncopated rhythm. Despite being born in the Chicago club scene, the style never quite blew up in the U.S., though it has come on lately, made popular in the last several years by Daft Punk—especially through the sampling of their “Harder, Better, Stronger, Faster” in Kanye West’s “Stronger.”

Disco’s role as a forebear to any music today feels a bit, well, off. Disco’s history is that of flameout in the most epic of fashions. In this country we associate disco with a terribly outdated, schlocky, exorbitant period. It’s Studio 54’s grand excesses followed by its even grander downfall. Last year’s You Don’t Mess with the Zohan, Adam Sandler’s most recent comedy, had a long-running gag where Sandler loves disco music and dancing, which is supposed to make him look out of date and goofy during the film. It’s still a joke, flushed out by punk rock. Punk is still everywhere.

I suppose it’s possible that some regional differences could apply here. I saw Tiesto in Washington, DC, which is definitely a bit more of dressed-up white collar town than Chicago, but my friend saw Justice in New York and reported similarities in his experience there. The second my girlfriend and I walked up to the entrance of the theatre in Chicago—just in time to watch the drunk fellow getting escorted by the boys in blue—I realized I might have misread the event.

These weren’t Tiesto’s jocks; they were the kids who talked a lot in English class. The pent-up anti-establishment rage nearly choked the evening. I saw six fights between inebriated partygoers and security police. The drug scene that I remember seeing bits and pieces of at jam band concerts as a kid was in full force here – bottles and bags were confiscated from dozens of people at the door by the surprisingly invasive security screening. There were kids too fucked up to walk or dance straight.

Recently, The New Yorker ran an interesting profile of indie rockers Of Montreal, who combine a brand of out-there alt-rock with the pop and glitz of disco and dance. What this article glosses over, though, is the rise of a subgenre that has begun to emerge in indie rock. Disco, the realm of the exclusive 1970s cool kids, has edged its way back into the American musical discussion by way of, oddly enough, the indie rock scene that is in many ways the descendant of the punk rock scene formed as an opposition in disco’s crater.

LCD Soundsystem epitomizes the rise of disco in the American alternative scene. The band amalgamates the weirdness of Pink Floyd with the pounding, simple guitar rhythms of punk, and with the sturdy backbeat of disco. Murphy was one of the founders of DFA records, a New York-based record label putting out some great, disco-infused indie rock. Along with LCD Soundsytem, groups like Hercules and Love Affair, who practically rip their drum sections straight from old disco records, and Holy Ghost!, whose “Hold On” might be one of the coolest disco songs ever written about New York.

During their set, Justice played all of my favorite songs—not just theirs, but dance music from all over the world that I’d heard only through mixes online or albums shipped from overseas. But it was a bit peculiar, as the crowd didn’t seem to be familiar with a lot of what they were playing. This music is part of a similar scene overseas, though acts like The Proxy probably are more techno than house, and is no less new or popular than Justice, but for some reason the crowd didn’t sing along or react like I thought they might. When Justice played Daft Punk, though, the crowd knew all the words, jumped extra high—and it was not Daft Punk’s singles, it was random songs off their album. This crowd knew the disco without really knowing the dance.

It’s not as though other countries don’t produce electroclash punk or dance-rock or whatever you want to call it. One of the bigger dance-pop-rock-electro groups right now is England’s Hot Chip, actually signed to DFA. Scotsman Calvin Harris’s fantastic debut album I Created Disco gets featured in remixes and mix tapes all the time. CSS, recognizable in the States by Apple’s use of their song “Hot, Hot Sex” in a commercial, is a prodigious remixer out of Spain. Germany’s Digitalism mix punk and house better than any group out there right now. But these acts exist abroad in the context of dance music. Record labels at the forefront of the scenes like Kitsune and Ed Banger out of Paris sign DJ acts and dance-clash acts side-by-side, and they play together at shows and on mixes. The crowds you see in their self-produced documentaries, like Belgian group Soulwax’s wicked Part of the Weekend Never Dies, may listen to rock music as well, but they are there for the dance, there for the club. They are the people who would have liked disco in the 1970s.

Bizarrely, this scene hasn’t quite shipped fully across the Atlantic. Instead, the most popular disco acts, Justice and Daft Punk, and the more popular electro-rock acts, like Hot Chip or Bloc Party, stand alongside the American clash acts like MGMT or LCD Soundystem as the rock gods of a new indie scene—not as new DJs or new producers in an ever-evolving dance club scene, as they are in Europe. Some of the American groups like Holy Ghost! or like Murphy himself, often take to the road as DJs, doing the bulk of their sets in Europe or Australia rather than here, where their fans aren’t primarily clubgoers.

What really stood out to me was even the dancing was different at the Justice show. At Tiesto, as at the house clubs I’ve been to in Europe and the techno places I’ve been here, the dancing around you is fluid, on the ground, together. There was some of that at Justice—especially from the people there who dressed like I was, who made up about 15 percent of the crowd—but it was primarily jumping up and down, bouncing side-to-side, not unlike the crowd you’d find at a punk or ska show. These kids may not have even known they were literally disco-dancing, and probably wouldn’t have been thrilled to find out they were dancing to the rhythms of the glitz and glamour that they seemed to be rebelling against with their faux-dress-up blazers or hippie-infused flowing dresses or torn clothes.

Toward the end of the night, I turned to my girlfriend and said, “You know, it’s weird to think that if I’d been alive during the 70s, I probably would have loved disco.” She cocked her head at me, gave me a puzzled stare, and said “Really? Not me. It has no rhythm.” I smiled at her, looked out on the crowd as they jumped up and down wildly, and kept on dancing.