Drifters/Love is the Devil is all rich storytelling and haunting electronica. 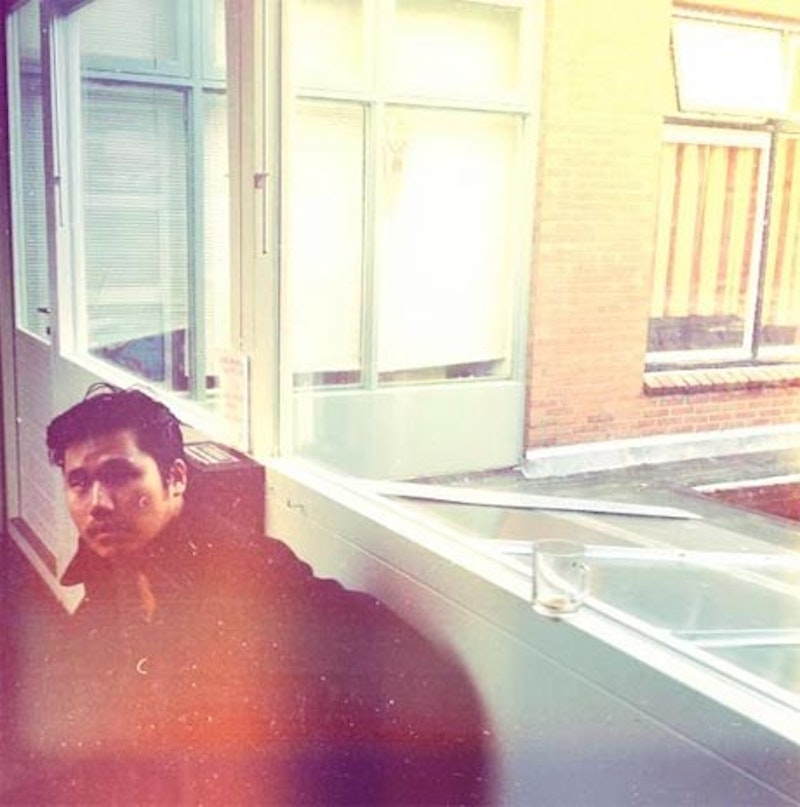 On his 2011 debut, Badlands, Alex Zhang Hungtai, aka Dirty Beaches, painted a nightmarish portrait of life on the road. Hungtai acknowledges director Wong Kar-wai as a major artistic influence. It is a sensible comparison given Wai's enduring preoccupation with characters that linger in life as much as they are prone to get up and go. The very sound of Badlands addressed that paradox. Intentional distortion and tape effects lorded over swaths of reverb and simple melodic structures. Hungtai's singing though was crucial. He can croon and scream within the same four bars and this seems the very embodiment of an urgent conflict which has felt increasingly absent in indie rock. Add instrumental numbers to the surrealist nightmare of Badlands and the result is Dirty Beaches newest work, the double LP Drifters/Love is the Devil.

Those looking for an injection of rockabilly or Suicide-inspired jams will be able to find that too. "I Dream in Neon" slithers cooly along a neon boulevard somewhere in the Nevada desert, its central character nervously eyeing the rear view mirror in search of a spontaneous pursuer. The cheap keyboard drum beat and vocal delivery of “ELLI” does admittedly come off as a dead ringer for a Suicide track. However, Hungtai's collaborators in the studio manage to steer him out of this comfort zone more often than not. A neatly looped guitar arpeggio and synth pad take “ELLI” out of that zone, the result being a much richer orchestral pop tune.

As much fear as there is in one particular instance, Drifters/Love is the Devil is full of twists. A swaggering disco beat and funk bass line compete with guttural feedback in “Night Walk.” It is tempting to believe that the eight tracks which comprise Drifters are, from a narrative standpoint, interchangeable. The pulsing bass and tribal drum set up of “Casino Lisboa” could very well have happened before “Night Walk” or followed “ELLI.” Whichever the order, it is the raw energy that “Casino Lisboa” injects into the fabric of Drifters which propels it forward.

The abandonment of samples on Drifters ironically does not make the album less electronic. Many of the drum and bass arrangements are so consistent that it feels like you are listening to a sample. The most obvious change is Hungtai's increased attention to nuance, both vocally and in the texture of the synthesizers that make up so much of the album's atmosphere. All ten minutes of Drifters closing track, “Mirage Hall,” roll along effortlessly. Hungtai shouting the Spanish equivalent of “Yes, he is crazy” for nearly half that time doesn't sound promising on paper. Yet the way the programmed drums fade into oblivion and are resurrected with a complementary beat and synth layer happen so seamlessly that the listener becomes fully immersed. The miasma making him crazy suddenly feels within arm's reach.

Love is the Devil deftly avoids the double album curse, the tendency by a band or artist unwilling to discard b-sides of the first disc and to package them as a second. While Drifters is all swagger and potentially violent encounters Love is the Devil is far more subbed, nearly symphonic in its melancholy. Much of the tonal shift can be attributed to the true solo nature of its music. The band is not involved, leaving Hungtai free to improvise with guitar looping, piano, and various keyboard setups. At one moment there are free jazz elements in “Greyhound at Night” mingling promiscuously with faraway drone layers a la Brian Eno's On Land. There's an expansive, often lost quality to the music in Love is the Devil. “Alone at the Danube River” would be an overly long sketch of guitar loops were it not for a timely 80's keyboard swell which brings the music away from sad guitar strums and into a meditative realm.

While Love is the Devil is an exquisitely somber affair, there are two tracks in particular, "Love is the Devil" and "I Don't Know How to Find My Way Back to You," which navigate a more bizarre, adventurous terrain. Both seem marked equally by personal loss as by shlocky noir and sci-fi flicks. Perhaps it is the ballsy choice of synthesized cello and violin that irretrievably paint that portrait better than Hungtai could have possibly done with his voice alone. It is these chances that Drifters/Love is the Devil deftly take head on which make a strong argument for the album as essential listening and for Dirty Beaches as a singular musical voice.