Artists who don’t cross over shouldn’t be automatically dismissed. 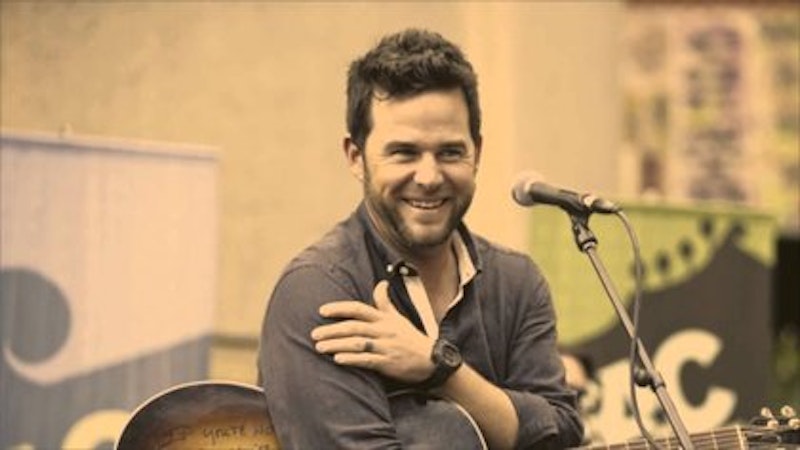 Certain country singers get embraced outside the genre’s main bastions—Eric Church, for his exaggerated rock and roll posing; Kacey Musgraves, for crafting tuneful songs about weed and same-sex relationships. But listening only to these singers gives you a skewed sense of the genre. Artists who don’t cross over shouldn’t be automatically dismissed. David Nail, Frankie Ballard, and Jerrod Neimann all put out albums over the last couple months, and each has spawned a country radio hit.

It’s surprising that Nail’s album, I’m A Fire (his third), hasn’t received more attention—it’s an impeccably produced collection of songs with credits from a number of beloved country songwriters, including Shane McAnally and Brandy Clark. “Whatever She’s Got,” the radio song, is sturdy, clipped guitar pop, with hints of post-Taylor Swift production (only little runs of banjo distinguish it as country). It’s co-written by Jimmy Robbins, who also wrote Sara Evans’ powerful “Slow Me Down.” “She'll do whatever she wants, and when she moves every jaw's gonna drop,” sings Nail, “and I do but I don't want her to stop/ …I want whatever she's got.” He’s in love and pleasantly confused.

This is rare: most of the time, his love has dire consequences. “Burnin’ Bed,” written by McAnally and Clark, sounds like a song about STD’s; it’s actually a sugary ballad harmonized in two syllable bursts. There are echoes of Fleetwood Mac in the vocals and the steady kick drum. McAnally also assists “Brand New Day,” where Nail is trying to convince himself to get back out there after a bad breakup. Towards the end of the song, Nail harmonizes with his backing vocalist, but sends another multi-tracked iteration of voice sneaking in the side, touching and unexpected.

“The Secret” shows that Nail can write a fine tune on his own. It’s pretty and unabashedly sentimental; Nail’s looping the past through his head. “I can’t help but think about all we could have been/had you not stayed here and settled for a life with him.” There’s an especially tragic moment when he tries to break away from the song, full-throated and pleading. But it’s futile—this memory runs his life.

In contrast to Nail, Frankie Ballard belongs to country’s sunny contingent—“Helluva Life,” the biggest hit of his Sunshine and Whiskey album, rides a sing-song cadence and looks for camaraderie in uplift. “Pennies make dimes and dimes make dollars/dollars buy gas and longneck bottles.” Ballard is capable of letting loose a serious growl, but mostly he sings everything warm and easy. The man’s upbeat enough to suggest “bad times make the good times better.”

Ballard’s from Michigan, not prime country star territory, and he’s rocking a James Dean look on his album cover, but he’s not a rebel or an outsider. Plenty of Nashville talent contributed songs to this album as well. McAnally wrote a track, as did Josh Kear, a force behind Lady Antebellum’s “Need You Now,” and Luke Laird, who recently won a Grammy for his production on Musgraves’ Same Trailer Different Park.

Since Ballard is an optimist who happens to play guitar, he doesn’t really get broken hearted. “Tell Me You Get Lonely” is the tear-jerker here, but it’s all about how the other girl made a mistake: “I bet you’re kicking yourself, for letting me walk away.” (Ballard references Tom Petty in another song, and this is classic Petty syndrome: “You got lucky girl, when I found you.”) Of course things flip at the end—Ballard’s just waiting for her call and pining away. But couldn’t he pick up the phone? He knows the good life; pain is beyond him. That means he needs killer songs to fight monotony, and he doesn’t have enough of those.

Niemann’s got the same problem. His big number, “Drink To That All Night,” comes as the third song on High Noon, presumably to make you listen to the album a bit longer. The singer wrote more of the tracks on his album than Ballard and Nail did on their releases, and this shows why writing your own tunes is completely overrated. The arrangements are more muscular compared to Niemann’s past work (“Lover, Lover,” “What Do You Want”), but muscle can’t save it. There’s not much going on after the first few tracks.

“Drink To That All Night” is surprisingly stern and dark for a party song. Singing low and fast, Niemann is almost rapping at the beginning of the song. When he cranks up the volume for chorus, he sounds menacing: sure, he “can drink to that all night,” but he doesn’t seem excited about it, which augments the song’s momentum with some edge. After that, he coasts through the rest of High Noon—“We Know How To Rock,” “Day Drinkin,’” “Beach Baby,” “Refill”—stripping any of the excitement from the activities he describes.

It’s important to remember that before Eric Church started showering with his shades on, he was churning out pop in country’s trenches, just like these guys. In Nail’s case, there’s more behind the hits; for Ballard and Niemann, the radio is all you need. But if you just listen to the outlaws or the rock stars, you’re studying a distorted history.