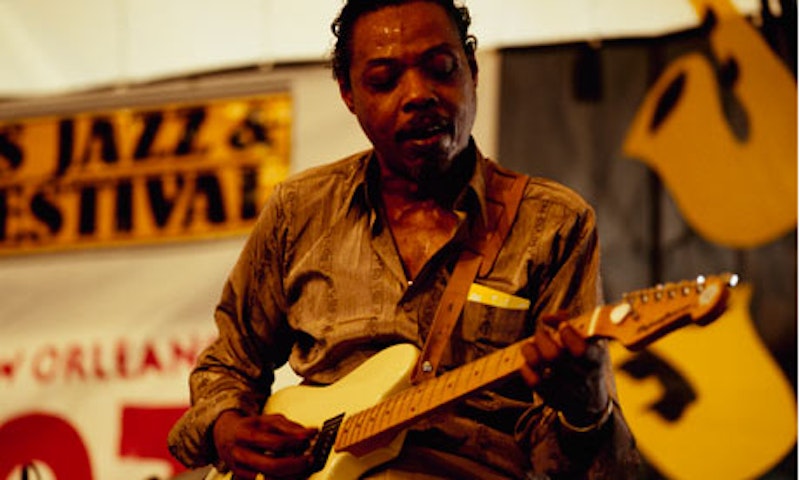 Cornell Dupree was one of the most revered session guitarists throughout the 60’s, 70s and 80’s, playing on over 2500 records ranging from blues and R&B to gospel, rock and jazz. He passed away in his Fort Worth home on May 14th and rather than tell another sad story about how we’ve lost another irreplaceable legend, I’d like to highlight five of my favorite Dupree enhanced albums. He said, “Not many people read the back of albums,” but I certainly do, and every time I see “guitar: Cornell Dupree” in the credits, I know the band will be tight and the licks will be as thick and smoky as Texas barbeque sauce, and just as finger lickin’ good.

Dupree joined fellow Texan King Curtis’ group, The Kingpins, in 1962. Nearly ten years later the band cut two records live at The Fillmore West. Culled from a three-night stand, one LP is King Curtis’ opening set, and the other Aretha Franklin’s headlining show (with the same band). Both are essential, though I actually prefer the King Curtis set for pure raw soul power. “Memphis Soul Stew” is the track to sample, as each band member gets his own intro and Dupree’s unleashes a few of his most tasteful riffs. King Curtis would pass away before the album’s release, but Dupree went on to tour and play with Aretha until 1976.

Dupree was a frequent sideman for Donny Hathaway, and Donny Hathaway Live, is the high water mark of their collaborations. The first side was recorded live in Hollywood with Phil Upchurch on lead guitar, and the second side was recorded in Manhattan with Dupree in the first chair. Dupree is the less flashy of the pair; his rhythmic support and restrained leads help the band simmer through covers like John Lennon’s “Jealous Guy,” and “Voices Inside (Everything is Everything).”

Live at the Copa is the most famous of Sam Cooke’s live albums, but this is the set that best typifies the way Cooke could slay crowds when he felt like breaking a sweat. Not commercially released until the 80’s, Live at The Harlem Square Club is probably the most accurate representation of what it’d be like to see Cooke & King Curtis unleashed in a black nightclub. You could argue that the top third of this list doubles as the top three live soul albums, and all feature Dupree’s six-string stylings.

There are few endorsements in the jazz community that carried as much weight as being asked to play with Miles Davis in 1972, when Davis was creating pushing the boundaries of jazz, confounding music critics and scooping up all the best young talent. “Red China Blues” is the most conventional cut on the double LP (which is saying something, as everything else is pretty far out there) and Dupree more than holds his own, proving his utility across multiple genres.

Saxophonist Archie Shepp never shied away from mixing politics and jazz, and Attica Blues, released on the heels of the Attica Prison massacre is chock full of anger, soul and some really heavy grooves. Dupree’s guitar underpins the efforts with jagged riffs and chunky chords, heavy with pain. The record is a bit of an assault on the listener, but never quite careens out of control, and in my estimation, is one of jazz’s greatest protest records.

Narrowing this list down to five was damn near impossible, and incredibly subjective. I’ve left out classics like Esther Phillips’ From A Whisper To A Scream, Paul Simon’s There Goes Rhymin’ Simon, Wilson Pickett’s In The Midnight Hour, Harold Alexander’s Are You Ready, Rahsaan Roland Kirk’s Blacknuss, Weldon Irvine’s Sinbad and The Voices of East Harlem’s Right on Be Free amongst many, many others.