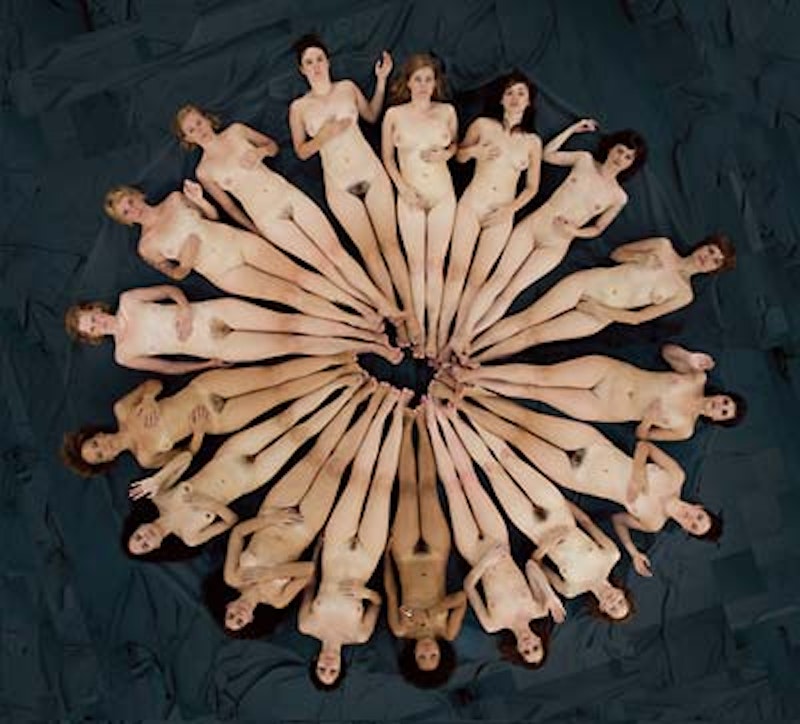 Baroque Primitiva comes in a 30-page book featuring photography by Kristin Anderson. You can tell it is art photography because it features supine nude multi-ethnic models—especially close-ups of impassive faces, breasts and nether lips. The cover shows the supine mutli-ethnic models arranged in a mandala.  So like I said; half-assed Eastern imagery plus sex. That’s art.

Baroque Primitiva is a project of Alvarius B, better known as Alan Bishop of the now defunct Sun City Girls. Everyone tells me I’m supposed to like the Sun City Girls, and I have kept trying. But the cover art nicely encapsulates why, despite my best efforts, I’ve always found their schtick more irritating than entertaining. Cutesy faux-mysterious artsy ethno-kitsch. Barf. Is it supposed to be clever or eccentric that the liner notes refer to Ennio Morricone as “Maestro Padre Supremo” or to Brian Wilson as “Smiley Wilson”? That’s not clever; it’s not funny; it’s not mysterious or whimsical. It just comes off like dim frat boys praying someone will mistake them for mercurial geniuses.

The music here is more interesting than the album jokes or album art, but not by enough. The set list includes a bunch of covers, most of them by Morricone. But covers and Bishop originals all blur together into the loose, old-weird-America-via-Dylan ambience. That looseness and the stripped down feel is supposed to connote cracked eccentricity, but it just feels lazy and half-formed. Morricone’s bizarre shifts in dynamics are flattened out into drifty alterna-New Age plodding. You can see the musicians winking throughout. Isn’t it cool that we turned this swaggering, polished, orchestrated and big-budget extravaganzas into punk chamber pieces low-fi enough to be hip? Aren’t we weirder than the originals? And the answer is… no.  Sorry, worrying that much about being weird doesn’t make you weird. It makes you predictable and staid.

And if you needed a further demonstration, you need look no further than the final track, a woozy desecration of the Beach Boys’ “God Only Knows.” Taken at a sluggish pace and tricked out with ragged playing and stoned dissonance, the song staggers forward until towards the end it dissolves in a welter of screeching. It would be a bizarre desecration… if, you know, turning pop into free jazz hadn’t been a hallowed art-rock tradition for at least the last quarter century. They even fade out on some tape loop manipulation. Daring, and yet provocative.

The problem is pretty simple—the avant garde is its own rut. “Alvarius B” wants so damn bad to be an eccentric genius like Morricone or Wilson, but the very intensity of his desire paralyzes him. He knows what an eccentric genius is supposed to do—low-fi sloppiness with some dissonance—and he sticks to it.

As a contrast, I would recommend Lindsey Buckingham’s 1981 solo album, Law and Order, which I bought recently and which is, for all its pop sheen and recognizable song structure, that thing which Baroque Primitiva so thuddingly fails to be—an actual work of eccentric genius.

In fact, in many ways it’s the pop sheen and recognizable song structures that allow the album to be such a strange document. The songs all sound like they could have gotten radio play if Buckingham hadn’t miscalculated his coke intake. “Mary Lee Jones,” for example, has a nice bouncy beat—but the tempo is just a little too slow, which makes the drumming sound weirdly frantic… and then the last 45 seconds of the track dissolves, not into dissonance, but into a breathtakingly spastic, spiky guitar solo, which cuts off as if somebody had dropped a brick on it. A cover of “September Song” is both over-dramatic and over-precious, like listening to a coked-up lounge-singer fronting the Beach Boys. “Shadow of the West” includes flat out ravishing harmonies and a fey honking guitar riff, without any real effort to integrate the two.

The cover of Law And Order shows the head and naked shoulder of the smoldery Buckingham. The nudity isn’t at all arty; it’s basic cheesecake for the fans. There’s not really any indication of what’s inside. In hindsight, Buckingham’s intense stare looks too intense, but really, he could just as easily be trying too hard to sell the smoldering. He’s a pop star… and, as it happens, a really inventive and idiosyncratic musician. In comparison “Alvarius B”—for all his daring album art and indie cred—looks a lot like a dull poseur.