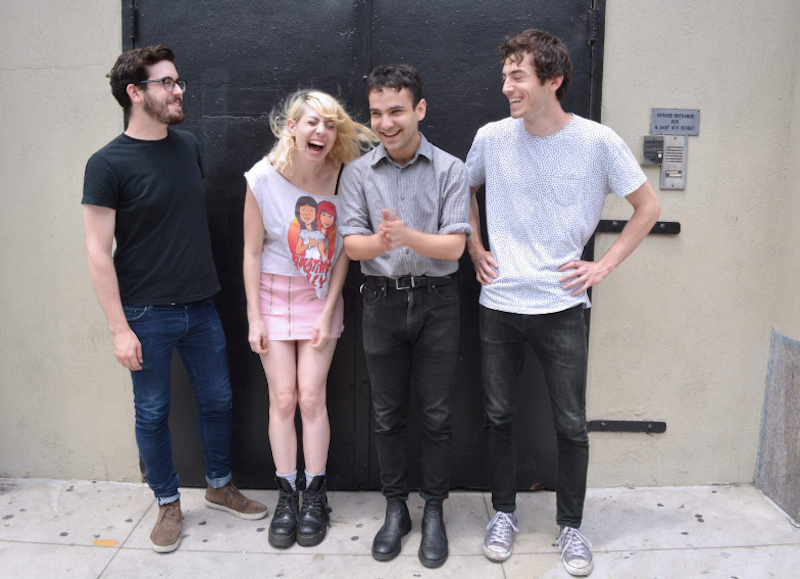 Much has been written about Charly Bliss' debt to the ubiquitous pop-grunge of the 1990s that sputtered out by the turn of the 21st century: Veruca Salt, the Muffs, Blake Babies, Weezer (who are still trudging through their zombie-like second act); these bands do inform Charly Bliss' sound, but the New York quartet—fronted by Eva Hendricks—is more than just a nostalgia act, rebooting the fuzzed-out aesthetic in a modern context instead of simply recreating it whole cloth. They're a tighter, more consistent group than any of their aforementioned forbears—except vintage Weezer, which didn't produce a bad song in its initial run—and Hendricks' lyrics, often centered on images of blood and tears, convey a sense of anxiety congruent with the contemporary political landscape.

Charly Bliss is finally releasing its debut album, Guppy, on April 21, after posting its first single on Bandcamp in 2013. That single, "Clean," is perfectly competent, a catchy rehash of influences that establishes the familiar soft-to-loud dynamic that the band still employs, although in a more nuanced manner; the same can be said for 2013's A Lot to Say EP, which features three B-side-worthy originals and, tellingly, two self-aware covers of Blondie's "Heart of Glass" and The Pixies' "Gigantic," showing that they're not ignorant to the concept of derivativeness.

More of the same would've made them fizzle out like any number of nostalgic indie upstarts, but Charly Bliss added a newfound propulsiveness to their sound on "Love Me," the breakneck 2014 single that serves as a proper introduction to the band. Its catchy, forward momentum characterizes and lays the groundwork for more recent tracks, like the crunchy "Percolator" or the caustic "Turd," those constant crescendos of guitar pop, whose verses are just as infectious as their hooks.

These raucous tracks form an eviscerative foil to their sonically sweeter side, displayed on Guppy-promos "Ruby" and "Glitter." The lyrics—more intelligible on these songs—demonstrate Hendricks' unique ability to connect the floating anxiety of alt-poets like Mira Gonzalez or Spencer Madsen with visceral, concrete images: "Find me barely alive/Too stupid to stay and too freaked out to drive" and "Guardrail, taking the stairs,/Passed out on the subway with blood in my hair" are two highlights.

I haven't heard Guppy yet, but based on the singles and pre-release reception, I imagine it'll be one of my favorite records of 2017. Charly Bliss won’t save guitar music by modernizing ideas from the '90s, but they’ll add energy to the otherwise insufferable state of indie rock, dominated by the dorm room philosophies of Father John Misty and the humble austerity of earnest-to-a-fault demure-bots Robin Pecknold and Bon Iver.

A common teen movie trope in the '90s was to have buzz bands play a set in the middle of the film—they'd soundtrack a dance scene, nab a few close-ups—like Letters to Cleo in 10 Things I Hate About You or The Donnas in Drive Me Crazy. Charly Bliss reminds me of one of those bands, destined to soundtrack those rare and perfect, unforgettable slices of adolescence.