There’s still time for Splice to offer a Summer Concert Preview. But Best Friends Day in Richmond, VA has as little in common with Bonnaroo as it does with most summer festivals. 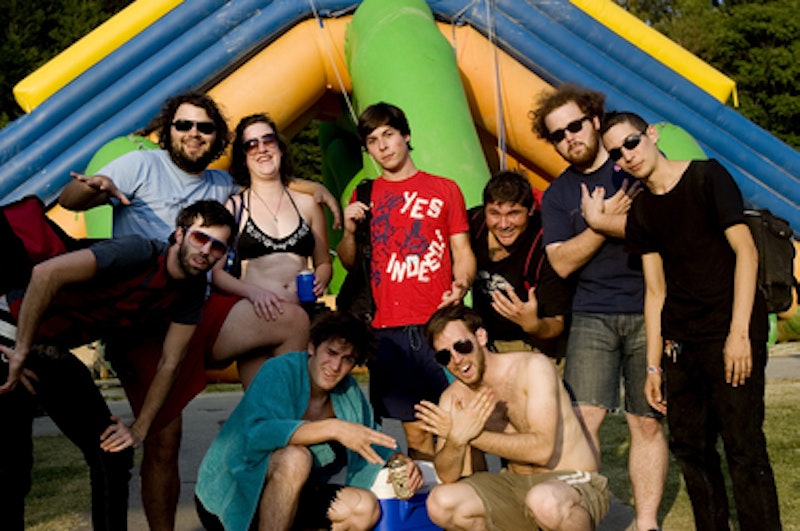 The author (bottom right) and some fellow festivalgoers at the '07 Best Friends Festival. Photo by Annie Flanagan.

I don't care too much for summer concert previews. Maybe it's because I haven't been to a legit festival since WHFS was still relevant, or simply because I can figure out the information on my own by following the tour itinerary of whoever I'm trying to catch in the flesh. Plus, is it really that essential to read about how they serve unique international flavors at Bonnaroo? But I'm not so jaded as to have given up completely on awesome musical gatherings. My predilections have just drifted to more DIY projects—festivals that are actually interactive, that go beyond the music, and are born out of something completely non-commercial. One of the coolest festivals to fit this mold is Best Friends Day in Richmond, VA.

Tall bikes, slurpees, majestic brick hotels, tacos, and grindcore. They all seem to make sense in Richmond. Best Friends Day is a three-day weekend from August 15-17 that celebrates Richmond's unbelievably loyal metal and hardcore scene as well as cooling it to the absolute max. Like any festival, there are bands. And Best Friends Day ‘08 has a bunch including Municipal Waste, Brainworms, and non-metal-friendly favorite This Bike is a Pipe Bomb. Over the course of the weekend there are various designated spots to catch music or to participate in events. This year's edition begins with a scavenger hunt on Friday afternoon followed by a stream of bands that evening at the venue Alley Katz. Concerts also tend to sporadically move from one spot to another. On several occasions last year a concert ended abruptly but regrouped later at someone's house. This might sound somewhat covert, but you don't need some kind of CMJ-like bullshit guide to the venues to figure it out. Word-of-mouth works just fine.

The hands-down highlight of BFD and one of my best memories of last summer is Hadad's Lake. Like some kind of water-friendly manifestation of Slab City, Hadad's Lake is an adventure-filled day of swimming, sunburns, music, and absolute lawlessness. Hundreds of kids flock to the water park as early as noon to begin the festivities. There are rope swings, water slides, grill outs, and always at least one black family reunion going on simultaneously. When I entered Hadad's last year, the first 10 minutes were overwhelming. After being handed essentially a "goody bag" from my friend and BFD aficionado, JRuss, I turned to my right and noticed a group of 15 people holding hands and counting down from 10, at which point they all peed their pants together. Later on in the afternoon, while guzzling some Joose pez-flavored malt beverages, a swarm of wasps gravitated toward us, which resulted in a mass chant of "Bees love Jooooose!" This year features live concerts actually at Hadad's, which had not previously been the case. But I'm sure the tunes will only contribute to the already gaudy distractions.

The last day takes place at the non-addressed Bike Lot. Sequestered between rows and rows of storage lots and chain fences, this cozy space is packed with a short stage and awesome sideshow features, including a skate ramp and a full-size ring for Mexican wrestling. When I was there last year, I caught only a bit of the Athens, GA thrash band American Cheeseburger before having to take an early exit. Even for those brief 15 minutes the concert offered more than just the music. There were thud sounds throughout the performance coming from the home-built skate ramp. Everyone had a 40 in one hand and maybe Frito-pie in a bag in the other. The interior of the garage had some outlandish merchandise and a couple of motorcycles and was a nice refuge from the sweltering heat. With Hadad's and The Bike Lot there's really no way you can come away from this weekend without a sunburn.

Best Friends Day is naturally born out of Richmond's music-appreciation scene. Townies and VCU kids combine for an impressive showing of punk and metalheads. In fact, many people leave and come back to Richmond citing that you can't find a more inclusive, dedicated hardcore community than in the old Confederate capital. That sense of camaraderie is readily apparent at BFD—from the group pictures at Hadad’s to punks moshing their asses off and then everyone hugging a lot. Old scenester organizers stand by offering words of wisdom and giving directions to the different event locations. Bands that play Best Friends Day perform out of excitement and respect for the city, the kids, and the whole event. I say event because BFD is unlike most current festivals. Fees are limited. You eat what you want. Music is in abundance. And you're guaranteed a great time. In classic do-it-yourself spirit, Richmond has become a prime destination for summer concerts, abiding by the motto: All music, all friends, and no black lights.

More information at the BFD MySpace.