A new reissue highlights the best album by the quintessential 90s stoner band. 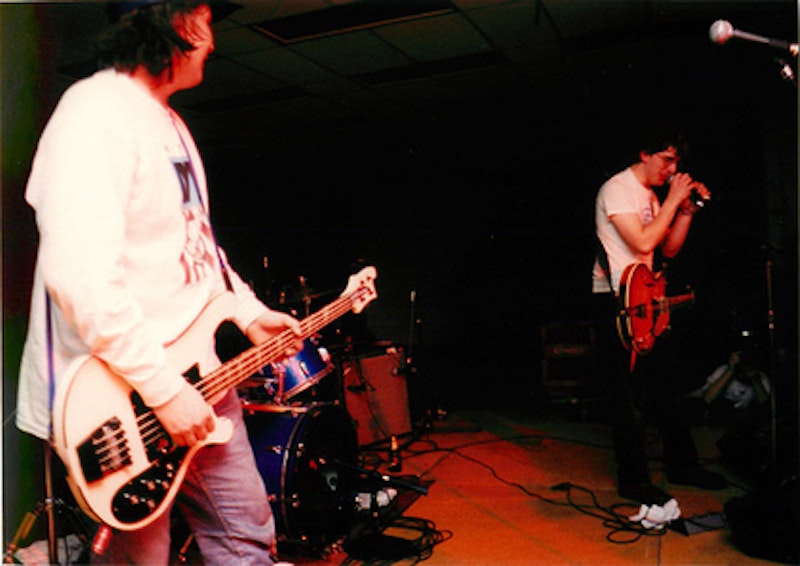 Released in April of 1993, Bubble and Scrape, Sebadoh's fourth studio album, and the last with drummer and founding member Eric Gaffney, is the band's defining album, and the one most worthy of an expanded reissue (out now on Domino/Street Pop). Even with the tension between Gaffney and Lou Barlow (former bassist for Dinosaur Jr.), and the difficult recording process recounted here by Jason Loewenstein, Bubble and Scrape is still the band's most consistent work, balancing Barlow's rather straightforward indie rock and rough folk (the beautiful "Think (Let Tomorrow Bee)" is his standout song) with Gaffney and Loewenstein's more alternative noise rock and post-punk.

The reissue features brief articles by Gaffney, Barlow, and Loewenstein, recounting the writing and recording process—or what they remember of it; as Loewenstein begins his, "Wow... THC is not a memory enhancing drug is it?"—along with some nice pop-art photographic collages and a couple of early band photos. Both Loewenstein and Barlow agree that this was the album that really found Sebadoh coming together as a band, even as Gaffney was less and less involved, refusing to play his songs live and preferring to record parts by himself. As Barlow puts it, "Eric Gaffney would not become the Brian Wilson of sebadoh... we let him go and didn't chase him after that..."

Barlow is really the most critically honest about the album. "i can't really listen to my songs on this," he writes, "i only hear my lack of vocal presence and some very thin, horrible sounding guitars... eric and jason's songs have aged better to my ears..." He's right. As deft as his song writing is here ("Soul & Fire," with it's painful refrain "I think our love is coming to an end," is one of the better breakup songs I've ever heard) his progressions and riffs sound like any other half-decent garage band of the early 90s. It's Gaffney's songs that give Bubble and Scrape its occasional brilliance—the raucous piano, guitar, and harmonica exchanges on "Telecosmic Alchemy," for example, and the Captain Beefheart-esque psychedelic blues of "Elixir is a Zog" and "Emma Get Wild" (I dig that surf-guitar sound).

Some of Gaffney's songs on earlier albums were pretty much unlistenable, but there's almost none of that here. The reissue’s new demo of "Emma Get Wild," for example, lets you hear just how far he'd come in managing his eclectic experimentalism. It amounts to some wonderfully inventive music, and it's unfortunate that this was Gaffney's last album with Sebadoh. Though at least on later albums (as well as this one) you can hear some of the influence he had on Loewenstein.

But Barlow is also correct when he writes, "i see 'bubble and scrape' as a teaser for a much better record that never happened... we were definitely on the right path, as crooked as it seemed..." When Gaffney left, Bob Fay took over as drummer. Fay had already been on a couple of tours with the band, and though he was an accomplished drummer, he had none of the wild improvisatory skill of Gaffney. Barlow admits as much, "he wasn't half as good as eric but was twice as fun." And you can only think how good the follow-up to Bubble and Scrape would have been if Gaffney had stuck around.

The b-sides on the reissue don't amount to all that much, other than a good cover of The Necros' "Reject," a four-part untitled song that sounds like something off The Microphones' The Glow Pt. 2, and an acoustic demo of "Soul and Fire," which is the only demo on the reissue that holds its own against the album version, with Barlow's hurt vocals really coming through. The other b-sides only make for interesting lessons in understanding Gaffney's fiery arrangements ("Emma Get Wild," as I mentioned before, and "Bouquet For A Siren"). If you're not really familiar with Sebadoh, this is the album to buy. If you already have it, the reissue probably isn't worth the money. And if you happen to be at the Pitchfork Music Festival later this month (July 18), you'll be fortunate enough to see Sebadoh (with Barlow, Loewenstein, and Gaffney reunited as of 2007) performing Bubble and Scrape in its entirety. Lucky bastards.