Proto-freak-anti-prog-folk masterpiece gets a nice reissue, but why now? 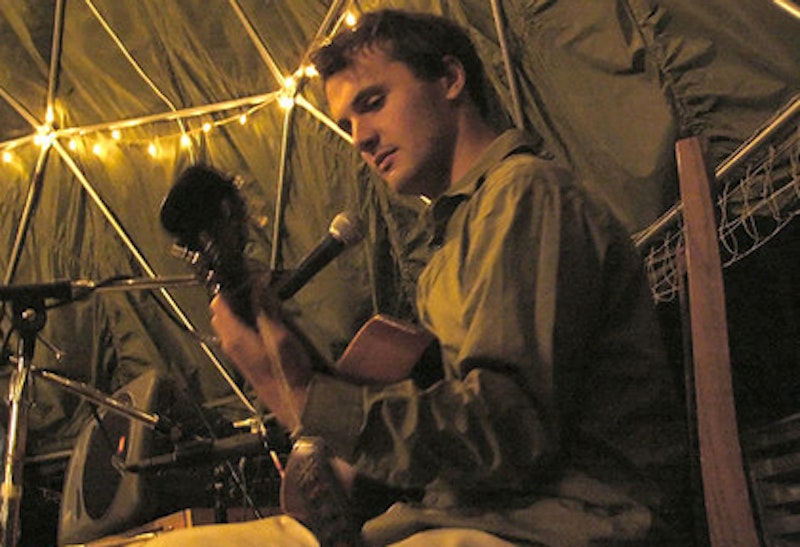 Phil Elverum in 2005. Photo by joshbzin

The Glow pt. 2 originally appeared in 2001 to an avalanche of praise and Best-of-the-Year list citations, so I was a little shocked to read in this reissue’s press kit that the album has sold only 20,000 copies to date. Even in this age of file sharing, and although the Microphones are, to be generous, an acquired taste… only 20,000 copies? Especially when most contemporary bands seem contractually obligated to define their sound as somehow post-, anti-, freak-, or retro-folk, you’d think The Glow pt. 2 would be more canonical now than ever. Not that this album is _____-folk by any standards other than the most superficial instrumental similarities. But if we are indeed living in a time when Sung Tongs or Ys is described using the f-word, then you’d think that 21st-century “folkies” would still be talking about The Glow pt. 2 with slack-jawed, drooling reverence. Come on, people. Get to the store.

The finally trilogy of Microphones studio albums—of which The Glow pt. 2 is the second, bookended by It Was Hot, We Stayed in the Water and Mount Eerie—form a triptych of natural formations: fire, water, and rock, respectively. By that measure, The Glow pt. 2 does the best job of sonically recreating its subject matter. It’s a 60-minute album spread out over 20 tracks, yet the first three songs take up nearly a third of the running time. They also happen to be the most traditional “songs” on the whole album, and they contain all the sounds that inform the rest of it—multi-tracked guitars, booming drums, panning effects, musique concrète, a metronomic heartbeat, and Elverum’s warbly vocals. That’s the theory I had in high school—that “I Want Wind to Blow,” “The Glow pt. 2,” and “The Moon” are the conflagration, and the remaining 45 minutes are Elverum sifting through the ashes and finding only scraps of those three songs.

It’s a tenuous theory, but The Glow pt. 2 is the kind of album that inspires such over-thinking. Elverum’s world is such a clear and complete one—filled with repeated song titles, alternate versions of songs, and highly personal lyrics—and yet his is such a deeply strange world, too. He plays almost all the instruments and sings most of the choir-style vocals, and he self-produced and recorded The Glow pt. 2, as well—on analog tape, no less. The result is a record that sounds like nothing else: nylon-string guitars flow in waves (“The Moon”), vocals fly in from all sides (“You’ll Be in the Air”), distortion occasionally swallows everything (“Samurai Sword”). And yet for all the massive wall-of-sound productions, this album sounds perfectly organic. Elverum’s commitment to analog production gives the whole thing a seamless, warm quality that sounds timeless. It’s an odd mixture of lo-fi sounds and symphonic size, postmodern collage and old-fashioned acoustic instrumentation.

But The Glow pt. 2 was all these things in 2001, too, so why the reissue now? There’s a nice new disc of newly recorded songs and “destroyed versions” of Glow material, but I can’t imagine anyone but a long-since converted Microphones nut sifting through this material. The more casual listener could probably glean more from the original album and the 2002 B-sides collection Song Islands. Interested listeners will gain a lot from the reissue’s second disc, however, primarily an insight into Elverum’s working methods. Hearing the alternate version of “The Glow pt. 2,” with its movements in a different order and the arrangement slightly modified, one can see how much artful cut-and-paste went into this album. But similar revelations are possible from Song Islands, which included two different versions of “The Moon” (there are two more “destroyed versions” here, as well). Of the previously unheard songs, there are a couple of real gems. “Where Lies My Tarp?” eventually builds into a bouncy, harmony-laden pop song, and “I Hope You Wish You’d Die” is a relatively straightforward song reminiscent of early Pavement.

So thank you to K Records for unearthing a few unheard tracks for us fans, but the purpose of this sudden re-release still eludes. There’s been no audible remastering of the original album, nor are there any illuminating liner notes that describe the record’s creation. My only guess is that K brought this out to remind the public that Elverum’s still alive. After Mount Eerie, he released a solo live album of new material in 2004, and then changed the band’s very name to Mount Eerie. He put out a few small-release EPs and singles under that name, and then a vinyl-only album called No Flashlight in 2005. If you can track down the 7 Songs from Mount Eerie EP, it’s worth hearing the new material. But for the most part, Elverum has apparently decided to avoid even the weakest spotlight, perhaps befitting a man whose lyrics are so filled with allusions to physical transformations and a deep, comprehensive fascination with the natural world. In the seven years since The Glow pt. 2 was first released, the market for broadly folk-inspired experimental music like Elverum’s has exploded; perhaps now he can belatedly cash in on his vision.