MMJ’s latest captures a few typically solid alt-country tracks, but is mostly a confused and perplexing mix of songs. 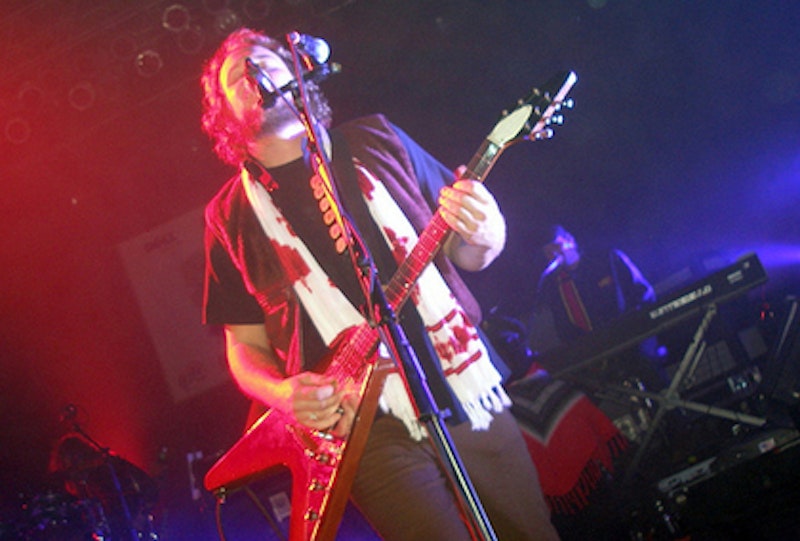 When My Morning Jacket released their second album, At Dawn, in 2001, it set them up as the next big alt-country band—the coming of another Whiskeytown or Uncle Tupelo—though frontman Jim James looked more like the twentysomething metalhead from your local guitar store, complete with Flying-V guitar and all. At Dawn is still one of my favorite albums of the last 10 years, with James doing Neil Young folkiness better than Neil Young ever did. MMJ followed this up with 2003's It Still Moves and a two-volume collection of early demos and cover songs, which actually got me to like Elton John's "Rocket Man." In fact, James has a knack for really good covers. His version of Dylan's "Goin' to Acapulco," played with Calexico, is the best part of last year's I'm Not There soundtrack. And then there's the recent live cover of Willie Nelson's "You Were Always on My Mind"

2005's Z found the band working with producer John Leckie, whose previous credits as producer include Radiohead's The Bends. And much of Z and the latest album, Evil Urges, have more than a little of the Radiohead influence to them. The opening to the title track on Evil Urges (before the country twang comes in) sounds like a rip-off of "Subterranean Homesick Alien" (or half-a-dozen other Radiohead songs, for that matter). Z dropped the usual heavy reverb found on MMJ's first three albums, and made use of synthesizers and dubbing and more eclectic musical styles—making MMJ into a kind of indie psychedelic jam band. Evil Urges goes further with this experimentation. But whereas Z is consistent throughout, Evil Urges comes off as a confused mix of songs, making for a harder listen.

What to make of a song like "Highly Suspicious," for example, that sounds like a Prince electro-pop b-side (except not nearly as good), where James sings about a "peanut butter pudding surprise." I don't know what that is, but it should probably have some gross definition on Urban Dictionary. Evil Urges has its good songs too, most of them found around the middle of the album. "Look at You" and "Sec Walkin'" are reminiscent of earlier At Dawn-era MMJ; and "Smokin' from Shootin'" would fit well with anything on Z; while "I'm Amazed" and "Two Halves" sound like late-70s radio hits (say, Tom Petty and the Heartbreakers); even the R&B-ish "Thank You Too!" is pretty catchy.

But Evil Urges still comes off as the album MMJ should have made before Z—figuring out how to reinvent their sound before turning out something really good. The way Iron and Wine had to make a mediocre mixed album like Our Endless Numbered Days before they could make The Shepherd's Dog (on my Top 5 for best albums of 2007). It's fine that MMJ isn't content to repeat Z—I'm not one of those critics/fans who thinks a band has to make the same album over and over again—and I admire their attempts to try out new sounds, but still, Evil Urges is MMJ's weakest album yet. I can only hope M. Ward (James' good friend and frequent musical collaborator) will teach MMJ a thing or two about good experimental folk rock (Post War) that doesn't leave you skipping past half the tracks.