Subtitled "Raw and Psychedelic Afro Sounds from Benin and Togo 70s," this new compilation is curated by the blogger from Analog Africa. And it's amazing. 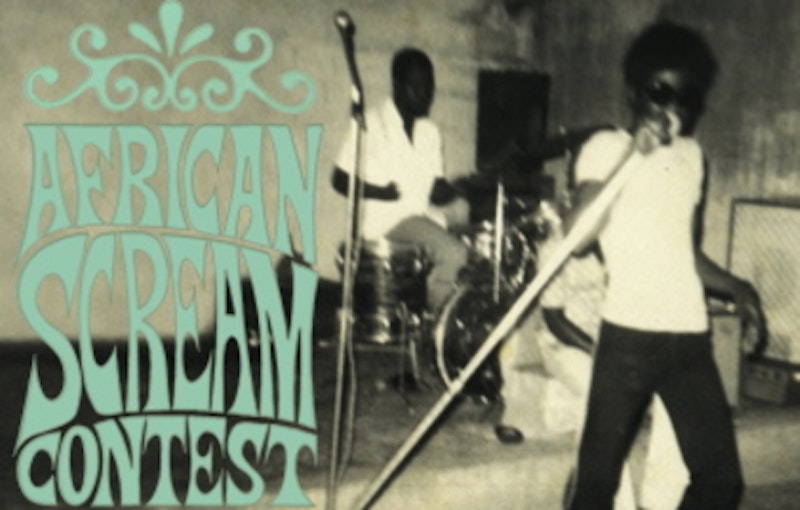 Over the past couple of years, the transport of 70s African music to stateside listeners has been simply astounding. We've seen instructive compilations like Pitchforkmedia columnist Joe Tangari's "The Indestructible Beat," a multi-"disc" (digital, my friends) effort that chronicles the many variations of Afro Beat, and Soundway Records' most recent project that explores Nigeria's incredibly rich soundscape. But perhaps the most impressive of all of the recent African music releases is African Scream Contest. Compiled by Samy Ben Redjeb, the founder and coordinator of Analog Africa, African Scream Contest is an exhilarating foray into the groovy and tripped-out sounds of the tiny nations of Togo and Benin. But aside from the music, what sets African Scream Contest apart from its predecessors is an unparalleled dedication to the musicians and their respective histories.

The most noticeable thing about ASC is its packaging. Unlike most albums that throw in a flimsy excuse for liner notes, here we are treated to a 40-page booklet filled with personal photos, gorgeously strewn about in pastels and sepia tones, brief interviews, and anecdotes that document the bands struggles to find popularity. Redjeb is often found at the center of these stories, zigzagging through the streets of Cotonou or searching for the relatives of a former Beninese musician. These vignettes help distinguish this album from other compilations. While other collectors have made considerable strides in educating the masses about African music, Samy's efforts extend beyond those of the simple messenger. He isn't just a scholar of the music or a passionate outsider. His relationships with the musicians and their families are more deeply rooted, thus constructing a direct link between musician and listener.

And then there is the music: the funky instrumental breakdowns and unhinged yelps. These are raw, soulful rhythms that feed off of the region's cultural history—the political unrest, the influential weight of its more prominent Anglophone neighbors, and of course, the absolute mania stirred by old James Brown cassettes. As it's explained in the liner notes, the music from Benin and Togo is diverse and resourceful. Many of the sounds blend West African highlife, Cuban beats, and ritual music. A couple of songs are in English, but the lyrics don't go beyond five word sentences. This might help explain why these artists never truly found audiences outside of the southern bulge. At the time, there were only two ways you gained exposure: sing in English or have your name be Fela Kuti.

In afrobeat circles, Fela is the eternal muse. His popularity is due in part to high profile collaborations (with Ginger Baker in '71) and an absolutely prolific discography. But while Fela was amassing record after record in Nigeria, there was a big band in Benin that challenged his output. T.P. Poly Rythmo is a name rarely thrown around in the U.S. But the band released nearly 100 EPs and LPs over the course of 40 years. In the 70s and 80s they were the musical representation of Benin, playing backup for all of the visiting singers drawn in by the Albarika studio. Poly Rythmo is featured prominently on this album, with excellent musical accompaniment on the tracks "Djanfa Magni" and the Gabo Brown led number "It's A Vanity."

One of the most precious tracks here is "Gbeti Madjiro." Recorded in 1970, the politically conscious song is filled with screams and yelps that inspired a whole wave of bands to copy the technique. The album is called African Scream Contest for a reason. Some of the best dance floor burners here are "Leki Santchi" by Napo De Mi Amor et Ses Black Devils and "Wait For Me" by the raspy voiced crooner Roger Damawuzan.

There is a common problem with African music compilations. Because so few of us know the music's history and the diversity among regional sounds and instruments, people wrongly assume that owning one album makes them an armchair expert. African Scream Contest does not make any claims to capture the overall sound of an era or even the greater sound of Benin and Togo. Sure, musically these bands have a lot of similar influences, but they each have their own stories of limited success and failure. This album is an engaging look at a single musical craze. The fact that it blends so many disparate sounds is a testament to the cultural history (and volatility) of the region and the ingenuity of its musicians. There is a considerable amount of passion and personal investment in this compilation. And with the handful of photos, interviews, and anecdotes, it seems like no detail was spared. If only all musical pet projects could come out looking this beautiful and sounding this good.