Animal Collective's newest is a four-song selection of material pulled mostly from the Strawberry Jam sessions. 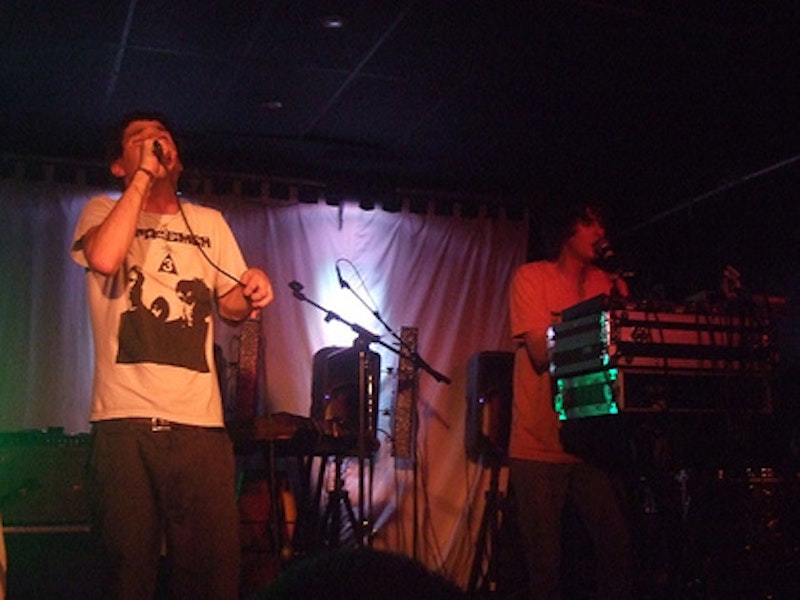 The trend continues. Since 2005, around the time their latest release Feels had leaked, Animal Collective has consistently introduced me to new sounds. Animal Collective makes breathtakingly unique music; from the jungle drums of "The Purple Bottle," to the liquid lankness of "Grass," to the entirety of 2003's Here Comes the Indian, an album still rich with uncovered treasures. A modest group of friends, they have no secret but their chemistry and an eclectic combination of tastes. Successively, their albums have changed and matured, growing from a messier, noise-based output to a more pop minded sensibility, a progression best shown by 2004's Sung Tongs, Feels, and their latest LP, Strawberry Jam. Their newest release, Water Curses, is a short EP of four songs from the Strawberry Jam era and mostly recorded during the same sessions.

The mini-record begins with the joyous title track, an upbeat bouncer of a song reminiscent of the band's first album, Spirit They're Gone, Spirit They've Vanished. Harsh but warm high sounds litter the explosive track, and an overwhelming pop sensibility pervades even as sounds of sea creatures warble in the background. The track, like most of the band’s material, verges on Dan Deacon or Lightning Bolt-esque childishness, but never quite passes the threshold of utter absurdity. Avey Tare swoons, “I want to be like water/slip into your throat and/make you feel alive and good” without any hint of cynicism or goofiness. Animal Collective has always retained sincerity in its work, and that certainly has not faded with time. This band takes itself very seriously, but not to the point of narcissism.

“Street Flash,” a song I first heard over two years ago, is finally represented in the studio on Water Curses, and the result is mostly predictable. The track is straightforwardly similar to the live versions, just as most of the songs on Strawberry Jam were. Avey Tare’s sliced vocals and hiccupping guitar, Geologist and Panda Bear’s distinctive samples, and Deakin’s high end mutated guitar parts are all here in equal measure, and they come together to make a mellow and relaxed song with some fairly simple but nonetheless poignant lyrics. Avey Tare’s brand of visual writing comes into play here, as he apologizes for being “late this evening,” explaining “all the clocks around the town had died.” Avey Tare dominates this EP, singing lead vocals on all four tracks, leaving his band mate Panda Bear, whose lyrics are significantly more straightforward, to play a more ethereal role, low in the mix.

“Cobwebs,” a lazy sway through pots and pans percussion and grand crescendos, is an amalgamation of seemingly disparate and even arrhythmic sounds to make a product that is at first jarring but is meant to be savored and examined in the long run. “Cobwebs.” and especially “Water Curses,” sound as if the band remade Strawberry Jam’s “Winter Wonder Land” twice, having never purged that style of super frenetic freak out from their systems.

Water Curses closes with the floating “vapor trail” like “Seal Eyeing”; a song originally debuted as “Sea Lion” at a couple of UK shows in 2005. The song is formless, coasting by like waves. Avey Tare is “swimming in the lake of melted ice” as his wife Kría Brekkan plays shimmering piano lines. This star gazing burnout also happens to be the song Geologist wanted to end Strawberry Jam with, an honor that eventually went to the far more energetic and far, far superior “Derek.” Water Curses ends this way: tired, exhausted, but contemplative and satisfied. It begins with a high-five and ends with a handshake. “Water Curses” is the teenage optimism of goals to be had, while “Seal Eyeing” is the thoughtful reminiscence of a life well spent. In only four songs, Animal Collective has replicated the cycle of life itself, and push forward artistically with material that is markedly more upbeat and danceable than their previous LP. Even though this band remains relatively under-appreciated, it already clear that Animal Collective is not slipping away any time soon.