A Twist of Faith

Meads of Asphodel’s The Murder of Jesus the Jew—a critique of the Modern Church. Seriously. 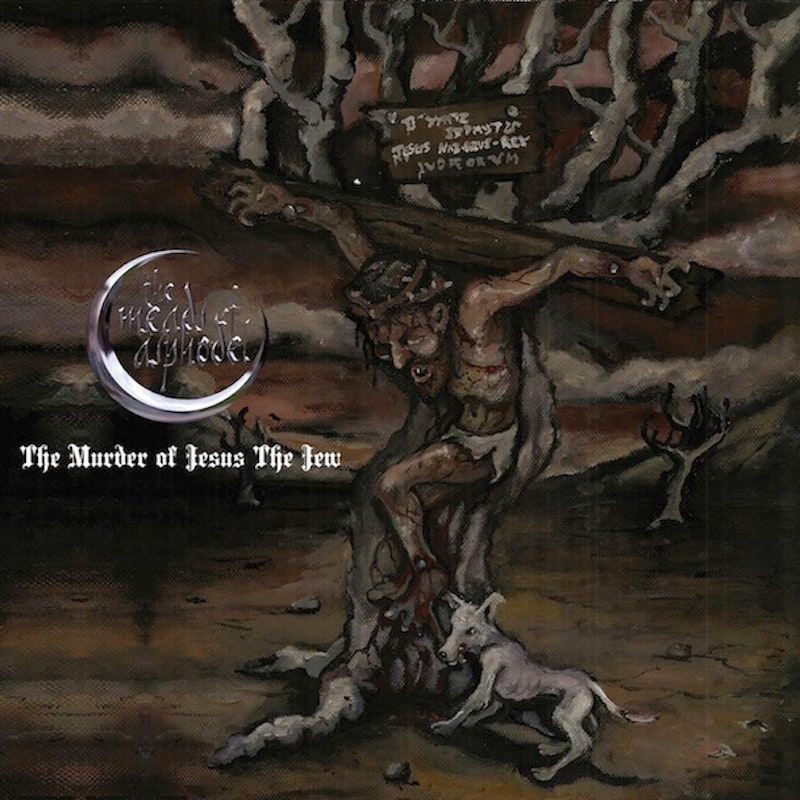 I bought British band Meads of Asphodel’s The Murder of Jesus the Jew expecting to hear some terrifying evil black metal. And that’s exactly what I got. At least, if by “terrifying and evil” you mean “show tunes.”

I do have a hideous attraction/repulsion for show tunes, and I think it makes sense to think of them as the music of the Antichrist. Especially if the show tunes are written by Andrew Lloyd Weber. And I dare anyone to listen to the second half of the song “Addicted to Christ” without having major Jesus Christ Superstar flashbacks. There’s a lonely horn that wanted to be jazz but had its soul stolen by music theater, and then a choral refugee starts singing like a chipper thespian—“Who is God? I am God? Are you God? But what God? I’m no God, it’s my God.” Soon enough we’ve got contrapuntal voices reciting bitter lyrics in an uplifting back and forth (First cheerful voice: “God hates you all!” Cheerful choral response: “Circumcise!”) And after not too long, again like Lloyd Weber, we launch into some classic rocky concept-album strut. Even the end, with a more traditional metal vocalist and a heavier roar, still has the busy crescendos and prog-rock shifts that strongly suggest Vegas.

In short, Meads of Asphodel is busily pissing off purists of all sorts. Whether you’re a committed Christian or a committed metal head, your idols are spat upon, your faith mocked, and your sacred rituals left to die slowly in a befouled orchestra pit..
And yet…is this really the blasphemy it’s supposed to be? Musically, conceivably this could be seen not as a hideous imposture of black metal, but as a roots exploration. Black Sabbath was really, really proggy—“Fairies Wear Boots” could’ve had a chorus line. Pat Boone’s tacky desecration of “Enter Sandman” was funny because it wasn’t a desecration: metal really does often sound like Nelson Riddle conducting a brontosaurus. Meads of Asphodel’s nine-minute “Genesis of Death” with the syncopated exotica shimmies and the ridiculous Spanish guitar moments and even the David Bowie-esque wailing at the end—obviously it’s ridiculous, but it’s not ridiculous in an unmetal way. It sounds like Rush, it sounds like Pink Floyd, it sounds like King Crimson or Uriah Heap—like all these bands which aren’t usually considered proto-metal, but which have solid claims to being just that. Meads of Asphodel is maybe apocryphal, heretical metal, but apocrypha and heresy are part of the tradition too. To me, at least, Meads is keeping the faith far more religiously than High on Fire or Agalloch, bands which sound more like metal to the uninitiated but deep in their souls emote like indie rather than lumbering like Sabbath.

And what about Christianity? There, too, Meads of Asphodel may be more devout than they appear. In a blandly secular age, to record album after album of theological arguments is not exactly the act of unbelievers, even if the theology expressed is that of unbelief.  “Addicted to Christ” mocks the idea of a different God for each individual—“A man God, a fish God, a black God, a white God, a gay God, a sad God, a blind God, a dead God”—a mockery which is perfectly reconcilable with monotheism. Similarly, the ambient keyboard washes and oh-so-Lloyd Webber emoting of Jesus in “Dark Gethsemene” is notably sympathetic. “It’s over, no, not after life. No second change in paradise…A glimpse of hell is all that’s left. A crown of thorns upon my head.” That’s sinful despair…but Christ is supposed to have had moments of virtually sinful despair. Which is to say that the song’s unbelief is buttressed with an appeal to a not-especially-unorthodox Christ. It’s a Christian atheism.

But contrived exaggerations of Jesus by the early church fathers made him into what he is now. Would not a God of such infinite power be beyond the trappings of mortal frailty? Why would a God produce only a single son whose message has since become lost in church corruption and human error? Surly a God would foresee the futility of what has become the Christian Church in all its crumbling out of date teachings. Why send a Son to save the sins of man and leave his doctrine to a few disciples who themselves could not ensure his words would be preserved until at least 30-50 years after his death? For what reason would the world have to suffer even more unspeakable cruelty two thousand years on to this day? Why would all this mystery be locked in a maze of religious jargon that is so at odds with itself the very church has splintered into various denominations each proclaiming to be the purest doctrine of Christ?

You don’t go on like that for page after feverish page if you don’t care about Christianity. If a theologian could answer those questions to Metatron’s satisfaction, Metatron would care.  He’s an argument away from believing—which is to say if you’re throwing stones at the church, you’re just not that far away from the church. The Murder of Jesus the Jew is a ridiculous mess of an album, but it’s not a random mess. Rather, it’s the inspired mess you can only get from following your twisted faith—in metal and in Christ—wherever it happens to lead you.