A Long, Winding and Weird Career

The B-52s frontman talks about his new band The Superions, and his upcoming benefit show at Baltimore’s American Visionary Art Museum. 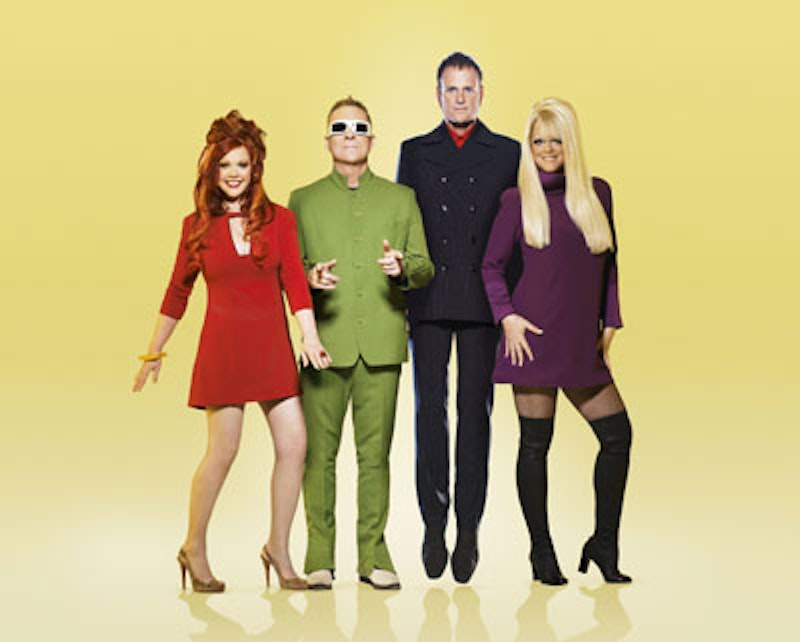 For over three decades, Fred Schneider has been one of the most idiosyncratic and instantly identifiable voices in pop music. With the mutant surf rock of the pioneering New Wave band The B-52s, Schneider’s talk-singing and non-sequiturs made songs like “Rock Lobster” and “Love Shack” perennial dancefloor favorites, and in 2008 they triumphantly returned with the comeback album Funplex. Along the way, he released two solo albums: the funky, pop-filled Fred Schneider & The Shake Society, first released in 1984 and reissued in 1991, and the gritty, alternative Just Fred in 1996.

More recently, Schneider formed a band outside of the B-52s, a dance pop trio called The Superions. The group released a self-titled EP in February, and shot a video for the hilarious track ”Who Threw That Ham At Me?”at the American Visionary Art Museum in Baltimore. On April 9, Schneider will return to Baltimore for a benefit concert at the AVAM. With a backing band called The Mastergators, featuring members of the Scissor Sisters and My Life With The Thrill Kill Kult, Schneider will run through a special set of old favorites from his solo career and the B-52s’ back catalog, and tickets are available now. And this show was a good excuse for me to get Schneider on the phone to talk about his new record, and his long weird career.

SPLICE TODAY: So this show at the AVAM is a benefit?

FRED SCHNEIDER: Yeah, all the money goes to the museum.

ST: How did you get involved with the museum and shoot your video there?

FS: About 10-15 years ago, I was the king of Mardi Gras there [at AVAM’s annual Mardi Gras party]. And my friend Allen Shepherd, who was in [My Life With] The Thrill Kill Kult and lived there, he approached the museum about filming there, and they gave us the go ahead.

ST: Is this show just a special onetime gig, or are you going to be doing more shows with this band?

FS: This is a one off thing, and I’ll be doing my solo stuff.

ST: Are you also going to be doing shows with the Superions to promote that record, or is that more of a studio project?

FS: That’s my main focus right now. We have three live shows in the can, and we’re gonna put that out.

ST: Did you know that “Who Threw That Ham At Me?” would be the band’s standout song?

FS: We put out “Totally Nude Island” first; I was embarrassed of “Ham.” I thought it was too ridiculous, I didn’t think people would get it.

ST: And that song is supposedly based on a true story, or at least an urban legend?

FS: I know several people who claimed [it happened to them], and I embellished on it.

ST: Since promotion has wound down for Funplex, are things in a lull with the B-52s, or are there always things going on with the group?

FS: We do shows every month, we’ll be playing the Rams Head Live [on May 22].

ST: Your first solo album was produced by Bernie Worrell, and then your second by Steve Albini. That’s an interesting contrast. If you did a third solo album, who would you get to produce it?

FS: We’d do it ourselves and get someone to master it.

ST: Are you proud of your solo albums, do you feel like you’ve established a good legacy outside of the B-52s at this point?

FS: My [first] solo album sold 35 thousand with basically no promotion the first time around, and ”Monster” made the dance charts and [the label] just ignored it, so yeah.

ST: With the Superions, do you collaborate on the music or just contribute vocals?

FS: I write all the words, and they do the music.

ST: I always wonder, when I listen to your music, given some of the off the wall things you say, are any of your lyrics ever ad libbed or improvised off the cuff?

ST: Your vocal style is so unique that nobody has really imitated it or sounded like you have influenced them. Is there anyone in particular you’ve heard that sounded like you or that you thought might’ve been inspired by you?

FS: There’s a band called The Punk Group, they have a song called “Fred Schneider.” I don’t know if they sampled me or if they had someone who sounded like me.

ST: It seems like you’ve definitely been parodied or imitated in a comedic way more, outside of music. Did you enjoy kind of making fun of yourself with your appearance on The Daily Show a couple years ago?

FS: Oh yeah, it was fun. I had to totally improv, they gave me a script but it was way too long.