A Brief History of '70s Rock

And a new deluxe edition of the Ramones' debut... for some reason. 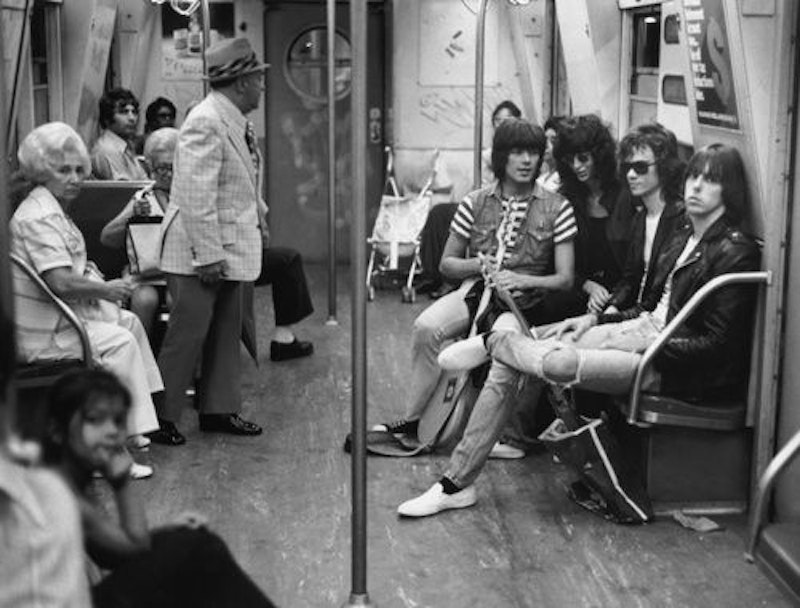 At the end of the 1960s, rock was king. Cleverly produced, high-concept creative landmarks like Electric Ladyland, Sgt. Pepper's Lonely Hearts Club Band, and Pet Sounds had become the recording industry standard. While the flower children were growing up and becoming the Me Generation, it seemed everyone was writing longer songs, putting out double (and even triple) albums, and experimenting with baroque, complex arrangements.

By 1976, a typical track required not one, but several, professional flautists. Often a band would begin recording a song as soon as the title was finished (the title was always a girl's name such as "Lola," "Layla," "Angie," or "Kashmir"). The singer would run into the studio, sing the first line, and then disappear to do more cocaine, while the guitar player began his solo. The solo went on until either a) the lead singer returned with more lyrics, or b) somebody finally couldn't take it and strangled the guitarist. The new lyrics weren't always on the same topic as the first line; in bands featuring Eric Clapton, they were never on the same topic.

Most songs included back-up singers, hard-working professionals who wore matching outfits and hustled into recording sessions cold, with no time to learn any lyrics. (This is why they either repeated whatever the vocalist sang, or, on classics like the Stones' "Gimme Shelter" and most Pink Floyd songs, just guessed.) Most albums became concept albums, like Tommy by The Who, where every song is about being blind. (Oh, and also deaf, like Helen Keller, and mute... and upside down... and also a virgin.... a virgin who is on acid! And has feet like a duck!) On Tommy, blindness became a metaphor for the cultural and political chaos of the '60s, just as pinball was a metaphor for the randomness of life, and being deaf was a metaphor for not being able to see.

It was a far cry from the early days of rock 'n’ roll, when songs lasted two minutes, and were raw vehicles for blistering riffs pounded out on saxophones, pianos, and electric guitars. Early rock was music you could dance to, unlike rock in the '70s, which had ceded dancing to disco—a popular, if primitive, form of early EDM with "syncopated" beats.

Enter the Ramones. The Ramones released their debut album in the summer of '76, a sludge of simple guitar chords, Beach Boys songs, and memories of third grade. It was stripped-down, amped-up, and a perfect antidote to the bloated, distended, putrescent, senile, orchestral, mummified, Dylanesque, psychedelic, syrupy, pedantic, dialectical, metaphor-ridden... [skipping a bit] ... behemoth that "rock" had become.

Instead of writing lyrics about doing acid while blind, and deaf, and addicted to pinball, the Ramones followed in the footsteps of Carl Perkins, and wrote songs about sniffing glue, just as Perkins had. Instead of creating "concept albums,” they reveled in offhand, disposable music. Now, Ramones is available in a deluxe edition. It comes in a collectible hard case, so that every disposable track will stay in mint condition, with strong resale potential.

The deluxe edition includes three CDs, as well as an LP. (Take that, Pink Floyd!) The price point is perfect for the core Ramones demographic: guys with fitness goals, specific playlists for their morning commute, and links to TED talks on their Facebook. Plus, not only are there original photographs, there are two essays, included free of charge! It's like you're being transported back to CBGB's, where young punks would go to "get their kicks" by reading and writing lengthy essays.

Both essays answer your No. 1 question, namely, "Wait, why the fuck did I buy this?" I hate to include spoilers, but the essays conclude that Ramones is a classic album, and surprisingly relevant, even now. The audio is "superior," which probably means remastered for your Bose noise-cancelling headphones. (Bose has released a firmware update that should prevent your headphones from cancelling the album, too, by accident.) How many times have you wanted to listen to the Ramones, but stopped because the dynamic range was too compressed, with poor stereo separation? Well, my friends, those days are over.

You want demos? We've got demos of "Beat on the Brat," with the alternate lyrics "Beat on the brat/With a stylish hat." Most of the songs on Ramones have just three chords. But on the demos, most of the songs have two chords, or less, or your money back! Plus, even these demos have been remastered, and they sound better than ever, almost as if you're listening to.... well, to the album versions, I guess.

It's not enough to just insist that punk isn't dead. You have to have some proof—and here it is! The deluxe edition of Ramones: platinum punk, at a premium price point.