The vapid snooze that is Hannah Arendt. 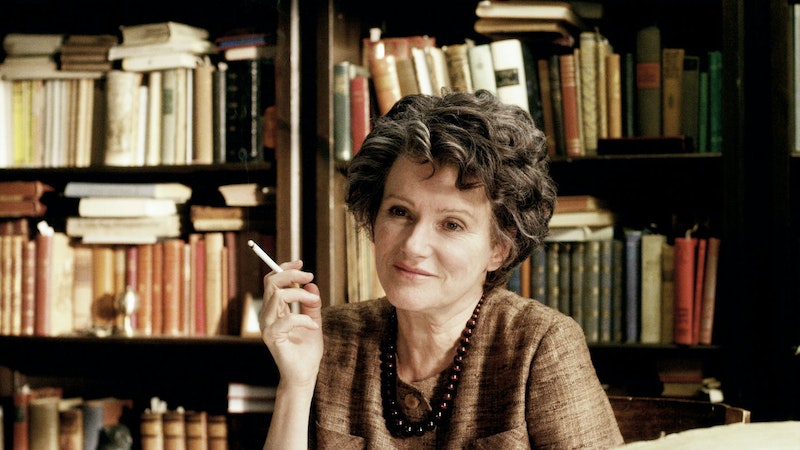 It's such a specimen, so typical: the high-minded prestige dodo. But the reviews this thing got... The dullard shuffles forward and everybody applauds. Ponderous and superficial at the same time, Hannah Arendt is a film for people who like period costume and the sachet stink of culture. The period is now mid-century New York, not Jane Austen's England or E.M. Forster's Florence, and the culture is high-domed and weighty instead of genteel and arch.

Hannah Arendt, maybe the best-known political philosopher of the 20th century, witnesses the trial of a Nazi war criminal and comes to a new understanding of guilt and responsibility for industrial-style genocide in light of the individual's redefinition under mass society. Yet nobody in the movie ever says anything intelligent. Arendt signals her superior brains by predicting that Kennedy will win because he inspires people. Election results and the conventional wisdom of the next 50 years—she has them both ahead of time, so she must be brilliant. (The real-life Hannah Arendt did not predict Kennedy's win and was more impressed, at least in 1960, by Nelson Rockefeller.)

The movie is about the tremendous fuss made by Jewish groups over Eichmann in Jerusalem, Arendt's report on the war criminal's trial. Arendt wrote that Adolf Eichmann was just a paper-shuffling boob, not a horrific mastermind, and she spent a number of pages discussing the alleged docility of Jewish community leaders in German-controlled territories. The resulting fury tore from Commentary down to The Jewish Floridian. After it was done, Hannah Arendt was still a respected professor, thinker and writer. Good. But the movie can't tell us what was so wrong about the outrage. If some professor wrote nasty things about blacks, a lot of us would want him out.

The question is why the outraged people were mistaken to find Arendt's thoughts so nasty. What were they misunderstanding and why? A tricky thing to dramatize when the ideas themselves don't get a look-in. All the stuff about mass society and the inverted morality of totalitarianism, all that's gone. We're left with the coffee mug version of Arendt's “banality of evil,” namely that people can do some awful things without thinking about it as long as everyone else is doing the same sort of thing. Not an invalid observation, of course, but not all of Arendt's point.

This isn't a movie where ideas are discussed, just waved about. In fact people are waved about. Nobody acts the way they really acted. William Shawn, the editor of The New Yorker, was almost grotesquely shy; he wouldn't have strode into a room of sneering intellectuals and told them to straighten up. Mary McCarthy, one of the smartest and meanest writers in history, would’ve done better than the pop-gun of a line the script gives her when she's blowing away an opponent. Norman Podhoretz, the movie's obnoxious “Norman,” wouldn't have sniffed and drawn himself up when challenged, he would have glowered and bellowed. Nor would he have looked so much like a Yankee and so little like a Jew; certain optics were being avoided here.

The movie was directed by Margarethe von Trotta, who wrote the screenplay with Pamela Katz. The actors do fine at what they have to do. Barbara Sukowa is Hannah, Janet McTeer is Mary, Nicholas Woodeson is Mr. Shawn, and Matthias Bundschuh is Norman, a very brief part. Norman gets a raw deal. In the movie and real life, he is author of a piece called “The Perversity of Brilliance,” which argues that Arendt, a notorious smart aleck, bounced around grave matters concerning the Holocaust just to show she had the moves. The movie doesn't show that Podhoretz was wrong to think this; that would take evidence and argument. Instead the big sin laid against him is that he said the thing at all. Saying bad things about Hannah Arendt is bad, and Norman is bad too. Look at that pompous title he drew up, “The Perversity of Brilliance”! In the movie Norman wrinkles his little nose and hitches up his frame when he utters the words. But what if he didn't? Then the title wouldn't seem so bad; it's a fair enough answer to “banality of evil.” There you have this particular night of intellectual cinema: The cast has to work like claymation puppets because the script has nothing to say.