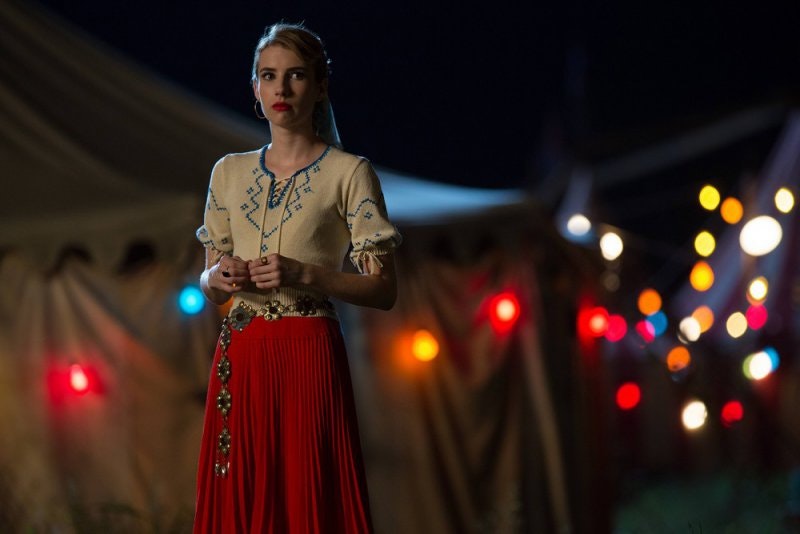 • The episode opens with Stanley (Denis O’Hare) daydreaming about being revered for bringing a museum the corpses of the freaks for display. Emma Roberts looks like a vision (seriously, she should only dress like she’s from the 1950s) and she shows some reservations about murdering in order to achieve her goals, yet still agrees to help Stanley. Stanley knocks over his suitcase, revealing all his gay porn magazines and in another instance of Ryan Murphy hitting his audience with a metal bat of social commentary, Roberts states, “There is only thing that this town hates more than freaks, and that is poofs.”

• Dandy’s mother discovers the body of their murdered housekeeper, Dora. She isn’t fooled for a second that her son did not commit this murder, and agrees to clean up his mess.

• Jimmy Darling (Evan Peters) attempts to kiss Esmeralda (Roberts) after she warns him that a man will come and promise him things, and that he’s a liar. It’s nice to see Emma portray a character with a soft side after playing Madison Montgomery last season.

• Jimmy Darling is still feeling intensely guilty over the death of Meep. To comfort him Angela Bassett fiercely kisses him. When he attempts to use his lobster hands he seriously injures her in one of the most ??? moments of the season.

• Elsa Mars sings some more and is heckled off the stage, probably because even the audience was tired of feeling like they were in an episode of Glee. Her fall from grace leads her back into the influence of Denis O’Hare, who she previously rebuffed on an offer to star in her own television show.

• Bassett’s character had a miscarriage after her tryst with Jimmy, revealing that she was born biologically a woman.

• Dandy’s mother reveals that there has been psychosis in the family in the past due to inbreeding, and that Dandy’s father was also a murderer. It’s feeling vaguely like Psycho between these two and I’m not sure if I like it.

• In a terrifying scene, O’Hare attempts to murder Bette and Dot in order to sell their bodies to a museum. At the last moment we discover it’s a daydream and that the twins are still alive. I can’t imagine this season without Sarah Paulson.

• Dandy oils up his body and heads out to a gay strip club where he runs into Dale with sweet Matt Bomer who plays an artist trying to make his way out West. Dale is having a secret relationship with Bomer, which explains his recent disappearance at the freak show.

• When Dale leaves, Dandy sweeps in and invites Bomer back to Twisty’s creepy bus where he repeatedly stabs him and is infuriated when Bomer refuses to die. In a very Breaking Bad move, Dandy attempts to dissolve Matt’s limbs in acid.

• When Bassett’s character attempts to leave Dale, he returns to the doctor who said he could remove her excess labia and breaks his hands. Everyone has a terrible temper this season.

• Gabourey Sidibe is back and she’s perfect as Dora’s daughter attempting to contact her now murdered mother. Best line of the episode was when she told Dandy’s mother, “I'm feeling really uncomfortable, so I’m going to go now.”

• Elsa is tired of competing with the Tattler twins, so she shows up on Dandy’s door and attempts to sell them to Dandy’s mother. I’m eager to see if the twins are able to escape this house of horrors.