For better or worse, the borough is crawling with film crews. 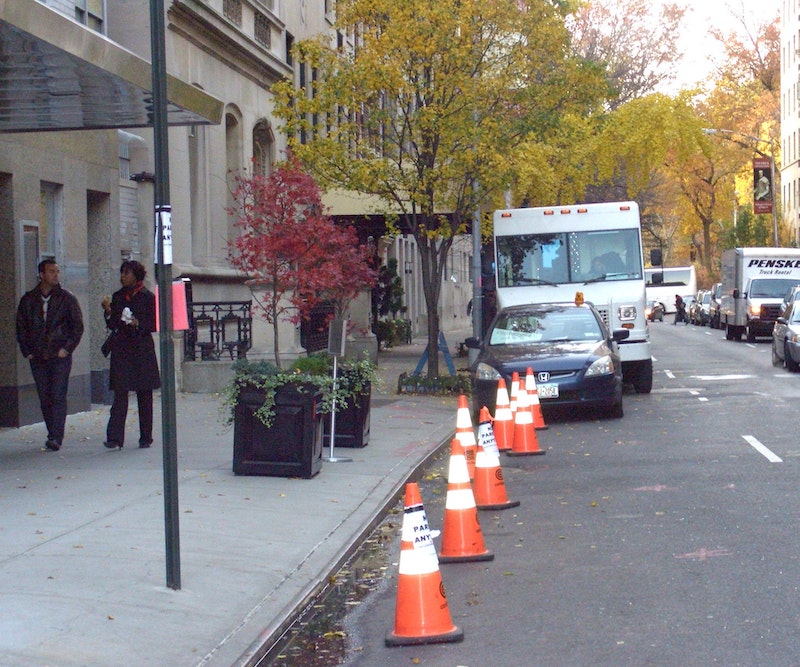 On my walk to the L train last Tuesday morning I darted past film cameras and camera crews, c-stands, tripods, dollies, the craft services table, leko lights, trailers, mics, sound equipment, camera cases, lenses, dressing trailers, and bright yellow signs with big, fat arrows pointing in the direction of “Set.” Damages, that psychological drama/thriller that airs on some network I’ve never heard of before, was filming within a five-block radius of the Bedford Ave. subway station. It was early enough that there didn’t seem to be anything filming yet, but you could still feel the energy and excitement of a burgeoning film shoot. There was even a makeshift disclaimer hoisted up on the sidewalk that screamed, in all caps, something along the lines of: “IF YOU WALK DOWN THIS STREET YOU’RE AGREEING TO US MAYBE POSSIBLY USING YOUR IMAGE ON CAMERA, SO DON’T WALK HERE IF YOU DON’T WANT TO BE FILMED, ASSHOLES.”

People know Williamsburg, Brooklyn for our hipsters, coffee, indie bands, and artisanal asymmetrical haircuts. But what people may not know is that, for one reason or another, Williamsburg and neighboring Greenpoint see a whole lot of Hollywood action. Living here is like living in Hollywood East! Get this: I was in L.A. for 10 days and I never saw a single film crew. In Williamsburg film crews are as common as taco trucks.

I’ve never personally seen any celebrities filming, though there was always gossip coverage of that Jennifer Aniston movie The Bounty Hunter, a large portion of which filmed up the street from me. But anyway, the fact that such big, brand name productions film right where I live makes it exciting to live here, and you feel like you’re a part of something even if you never become an extra. ABCs The Good Wife, which I have never watched, constantly films on my street. Boardwalk Empire basically recreated a Prohibition-era boardwalk right along the East River in this park I used to go to all the time. Then there are a couple sound stages over on Meserole St., right next door to Café Grumpy where I used to go to do school work. HBO’s How to Make It in America was filmed in Williamsburg over the summer, obviously to earn some hipster street-cred, and countless other television shows, feature films, student films, and shorts shoot in the ‘burg.

When a new production comes to town, typically the company coats the neighborhood in these brightly colored posters they place on every sign along the street, saying that you can’t park wherever the sign is, so don’t even try it. If you look closely, it tells you what the movie is called and how long they’ll be taking over. This information allows you to pull out your iPhone so you can go over to IMDB to see which celebrities you have a chance to stalk—not that you should be doing that or anything.

You would think that all this filming would make life miserable. And you know, sometimes it does. Sometimes you can’t cross the street until the director says “cut,” and when you’re just getting off work and you’re carrying two Whole Foods bags and you’re starving and you want to masturbate before your roommate gets home, and the only way to get there is by going through McCarren Park but some dude with a walkie-talkie is saying you can’t go yet because they’re filming, all you want to do is throw the jar of artisanal pasta sauce at his head and say, “Fuck Off.”

Camera crews crystallize the fact that daily life is a movie, which creates confusion between “reality” and reality. Wherever there’s a sight chance that you might appear on camera, film crews show that all of our interactions are performances, whether we intend them to be or not, and whether the cameras are actually present or not. Aren’t there always cameras? Aren’t we always being watched?

Most people watch television without seeing all the time, labor, and sheer machinery that goes into producing even a small clip of a popular show. This is why, for me, it’s not even the potentiality of seeing a celebrity that gets me excited when I’m walking down Bedford and pass through a set. I mean, unless the celebrity I might be seeing is... Hayden Christensen, which... call me, girl. It’s the weight and lightness—the transience—of film crews that fascinates. Film crews, which are like armies, drop in and set up little villages for 10, 12, 15, 18 hours of work at a time. They’ve taken over the block, they’ve infringed on your use of public space. But just a few hours later, everything is wiped out and back to normal before you could even remember they were there.