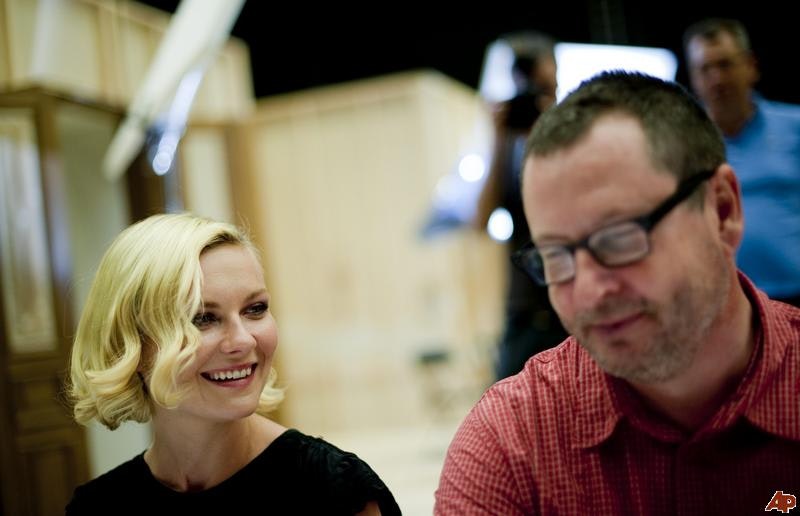 Lars Von Trier doesn’t take bubble baths. He doesn’t go to the mall, or scour the dailies for his name or pertinent gossip. He’s perhaps as close to the anti-Brett Ratner you could get: that smug and vainglorious cultural idiot of entertainment, so small and narrow-minded in his films as well as life that he may as well be in the sixth grade. Film is literally nothing but adolescent escape in Ratner’s mind; unfortunately he’s all too eager to share his own half-baked cinematic ideas with the rest of us.

Lars Von Trier makes movies that stick with you. Some stain (The Idiots), others haunt (Dancer in the Dark), and his latest, Melancholia, will leave you just as depressed and leaden with sorrow as Justine, the LVT avatar played brilliantly by Kirsten Dunst. Really: this might be her best movie. I can’t remember the last time I saw a film that so deftly and precisely conjured such a thick and adhesive sense of despair. Shown at the beginning and end of the film, the titular asteroid collides with Earth and annihilates the human race. Justine has just been married to a real twerp, and the movie’s two parts take place during and immediately after their obscenely expensive and tacky rich people wedding party. It’s supposed to be the happiest night of her life, as everyone at the party insists, but she’s a walking ghost, visibly beaten down by depression. Justine is so utterly disengaged and disinterested with everyone at her party, by the end of the night she can’t help but spew contempt for every sad, sick piece of human shit that makes life worthless and miserable for everyone.

But she gets better. As soon as Melancholia’s collision with Earth appears inevitable, it’s Justine’s sister Claire (Charlotte Gainsbourg) who loses it. She looks for reassurance in her husband John (Kiefer Sutherland), who happily denies any chance of an apocalypse until he downs a bottle of pills and dies foamy-mouthed in the horse stables. Claire becomes distraught and remains panicky up until the very last moment, whereas Justine grimly and calmly anticipates eternal oblivion, rubbing it in that she “knows” life on Earth is alone in the universe. Dunst is brilliant in this film: at first, so desolate—but by news of the asteroid, she’s full of hate and grimly satisfied that the people and the world she despises so much will literally be incinerated within hours. Dunst looks cosmically beautiful even at her most raw, but the way she is able to not only communicate but instill within you a sense of that bottomless and infinite depression inside of her is astounding.

It’s pretty remarkable any time a film sticks with you for more than 10 minutes. We live in a world where most indie, underground, and art house filmmakers are too timid to make bold and unusual statements, inevitably because it opens them up to criticism. LVT’s films are highly personal in a way most artists shy away from, and he’s a better artist for it. Say what you will about his flaws and the purpose of (masterfully) illustrating his depression, but even his biggest mistake would be far more interesting than anything from the likes of Brett Ratner.